Referrals and Child Protection in England: One in Five Children Referred to Children's Services and One in Nineteen Investigated before the Age of Five

This quantitative study focuses on the high proportion of children referred to children's services and the increasing use of statutory interventions.

This study found that 22.5 per cent of children born in the 2009/10 financial year were referred to children's social care before their fifth birthday. It is estimated that child protection investigations were carried out into the circumstances of 5.4 per cent of all children born 2009/10.

Data was collected following a Freedom of Information (FOI) request sent in mid-2015 to all 152 local authorities in England for national statistics on children born between 1 April 2009 and 31 March 2010. A total of 114 (75 per cent) of authorities provided data. Office for National Statistics population data for children aged one or under on 30 June 2010 were used as a proxy to calculate the number of children in each authority in 2009/10.

The paper sets out the statutory process for safeguarding children and discusses the stress that child protection investigations place on parents. It also notes the policy focus on early help over recent years to try to ensure children receive support and reduce the need for statutory involvement.

Despite the focus on early help, there was a 79.4 per cent increase in child protection investigations between 2009/10 and 2014/15. Over the same period, the numbers of referrals to children's services increased by 5.3 per cent and the numbers of children in need by 6.8 per cent. More children were investigated without finding that they were suffering or likely to suffer from significant harm in 2014/15 than the total number investigated in 2009/10.

The paper shows that three-quarters of children who were referred to children's services reached the level of being assessed for statutory services and 63 per cent became a child in need. Thus, a high proportion of children are involved in statutory interventions despite the existence of preventive measures. It is not known whether early help has contributed to this trend - for example, through widening the net and drawing in more children rather than reducing it, as it was intended to do.

The paper notes that there is limited information on the numbers of children receiving early help, either following referral to children's services or as a step down following a child protection enquiry. There is also limited information on the impact of early help services in improving wellbeing and/or reducing the need for statutory interventions.

The paper reports research on the link between levels of deprivation and levels of intervention (Bywaters et al, 2014). This research suggests that children referred to children's social care are likely to be concentrated in the areas of greatest deprivation, where poverty, instability of housing, crime, poor health and other stress factors are commonplace. Parents in such communities tend to experience above average levels of suspicion and investigation, which creates a "climate of fear" for those living in such communities. Evidence suggests that those entering the social care system are not offered support; are signposted without help to access support; or do not accept support if it is offered. 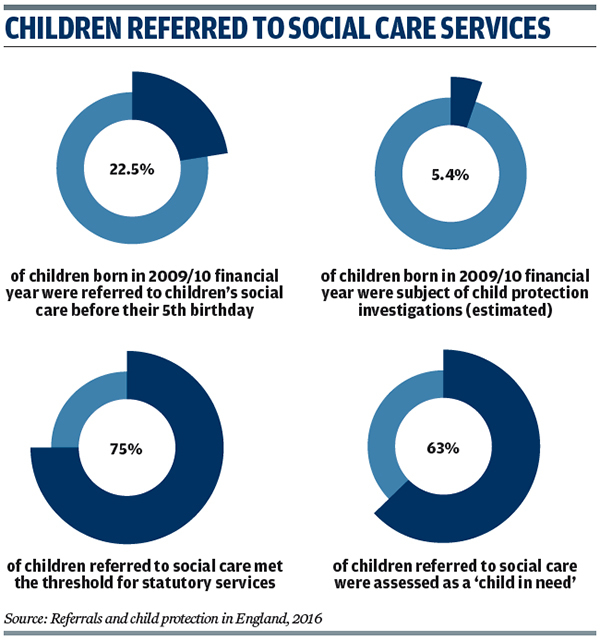 This paper focuses on how far the increase in formal responses to concerns about children's welfare is an appropriate response. It calls for a more humane response to children, moving away from the current emphasis on "individualised and investigative" approaches to an alternative non-blaming approach. This should focus on advocacy, poverty alleviation and developing family and community strengths.

The aim of children's social care would be to "improve the conditions of families and communities, enabling them to enhance the wellbeing of children rather than relying on agents of child protection to seek out harm". The paper also argues for the government to make longitudinal data available annually to show the extent to which children are involved with children's social care over their first five years. This data would also provide an accurate picture of the child protection system from which to develop policy and plan services. The need for further research into the impact of early help on the wider child protection system is also highlighted.

The authors conclude by saying: "Whilst some children need to be protected, there is little evidence to support this scale of statutory involvement or the growing focus on early, and increasingly investigative, interventions alongside increases in removal of children from families into long term care, special guardianship and adoption."

This article is part of CYP Now's special report on early help. Click here for more