Latest figures published by the Office for National Statistics (ONS) shows there has been a significant fall in the conception rate for under-18s in England.

Alison Hadley, director of the Teenage Pregnancy Knowledge Exchange at the University of Bedfordshire, praised the Local Government Association and Public Health England for supporting councils and NHS providers to tackle the issue.

But she warned that more needs to be done to bring England's under-18 conception rate down to that of other Western countries.

The Exchange has identified examples of councils delivering good practice in reducing teenage pregnancy rates, three of which are summarised here. 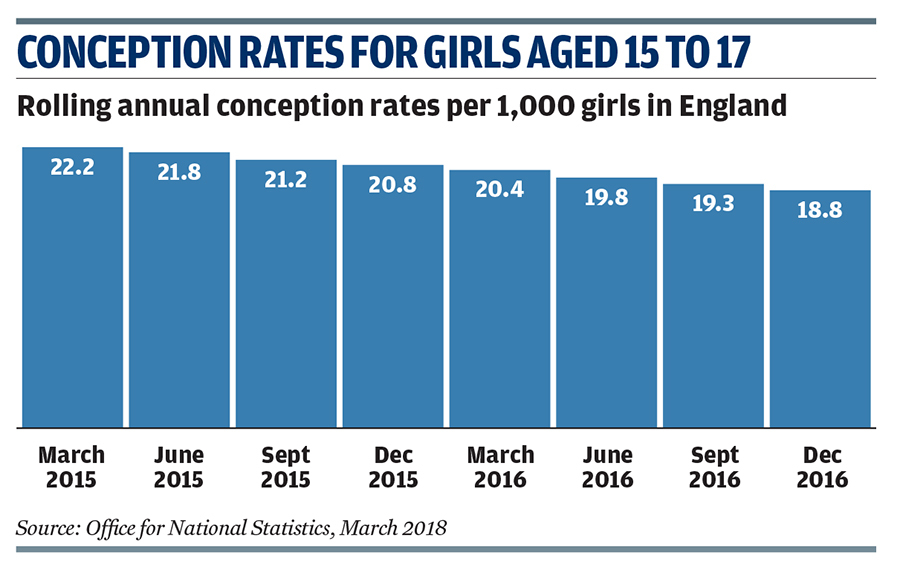 The council has established a network of drop-in sessions in secondary schools across the city run by a sexual health nurse and youth worker at lunchtimes.

Julie Nibloe, service manager at sexual health charity Brook, which runs the service, says: "Most of our time is spent talking with young people about sexual health and healthy relationships - we discuss what that involves, what is consent and staying safe."

Although a universal programme, the main focus is on supporting schools in the most deprived areas of the city to tackle teenage pregnancies.

Two years ago, the council launched a new scheme - Bristol Ideal - in partnership with the police to tackle domestic abuse and sexual violence.

Guidance and training is provided to schools to support them to learn how to identify pupils at risk and how to address that, and a lead member of staff is appointed.

Teenage pregnancies in Bristol have shown a steep decline, with the rate now 17.2 per 1,000, lower than the England average and 66 per cent below the rate in 1998.

One to One is an integrated sexual health service delivered by the local NHS through a "hub and spoke" model.

The hub is the centrally-located clinic, which has been given the "You're Welcome" accreditation for being young person-friendly.

There is also a network of drop-in clinics that offer access to sexual health advice from trained staff. These are open until 7.30pm during the week and part of Saturday, and are based in communities where need is greatest.

The drop-in service has also been accompanied by more dedicated support for the most vulnerable teenagers and those who become young parents.

A range of training courses is available to all health and non-health staff. These include everything from an introduction to sexual health to contraception training for receptionists and pharmacy counter assistants.

As part of that, dedicated training has been provided to staff working with the most vulnerable children such as those involved in youth offending, drug and alcohol and young people's care so they are aware how to help young people access services.

Anne Tierney, operational service manager for Integrated Sexual Health Services, says: Our aim has been to make sure young people feel comfortable accessing our services - we have worked closely with the voluntary sector, schools and health services."

Since 1998, teenage pregnancy rates have fallen 74 per cent in North Tyneside.

Cornerhouse, a local sexual health charity, was funded for a drop-in clinic in the city centre.

It is open six days a week with late opening from Monday to Friday and provides advice, support and information about sex and relationships, as well as contraception, chlamydia testing and pregnancy testing.

Contraception is also available as is testing for some other sexually transmitted infections. A nurse holds a clinic there twice a week to provide access to more clinical services, such as the contraceptive implant.

As part of the service, a boys and young men's worker has been employed to ensure they are engaged. As a result, 51 per cent of the 5,500 visits a year made to the drop-in centre are now from males.

The service talks to young people about having positive, happy relationships as well as supporting them to deal with issues including peer pressure, sexting and the risk of sexual exploitation.

Gail Teasdale, integrated services manager for children and young people's health, says: "Getting that atmosphere right is essential because our research showed that teenagers were almost more afraid of the sexual health services than they were of becoming pregnant."

The under-18 conception rate in Hull fell to its lowest level in December 2016, and is 64 per cent below the rate in 1998. Conceptions in under-16s are also down.