This University of Oxford study aimed to find out whether schools that become academies show a rise in the percentage of teachers without Qualified Teacher Status (QTS).

Published by British Journal of Sociology of Education, August 2019

Academies now account for two thirds - 66 per cent - of all state secondary schools and 30 per cent of primary state schools. In 2012, the government extended the freedom to employ teachers without Qualified Teacher Status (QTS), already enjoyed by independent schools and free schools, to academies. The idea was to encourage schools to employ experts in their fields who might not have teaching qualifications but teaching unions feared the move would encourage schools to cut costs by employing cheaper, less-qualified staff. This University of Oxford study aimed to find out whether schools that become academies show a rise in the percentage of teachers without QTS. 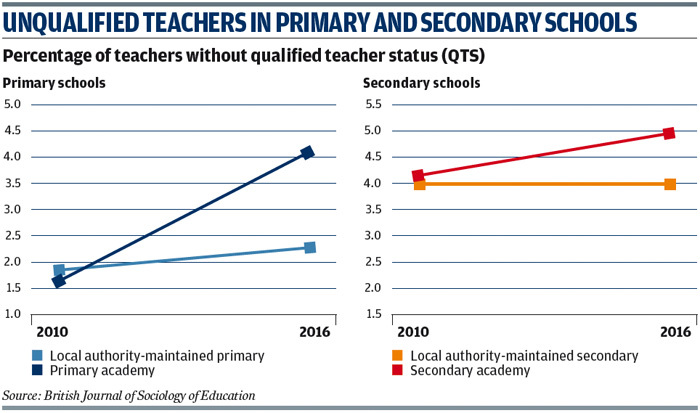 The research also found primary schools with more pupils from poor and ethnic minority backgrounds had a greater percentage of teachers without QTS. For every 100 poor pupils in local authority-maintained schools, 1.2 per cent of teachers did not have QTS but this increased to 1.9 per cent in academies. Primary schools in urban areas were found to be recruiting more teachers without QTS than those in rural areas. Meanwhile, schools with poorer Ofsted grades tended to hire more teachers without QTS than those with better ratings, suggesting poorly performing schools struggle to recruit qualified teachers.

The research also looked at different types of academies and found converter and sponsored multi-academy trusts showed a significant difference from local authority-controlled schools in terms of the percentage of unqualified teachers from the first year they became an academy.

The study suggests the academy programme is widening class-based inequality as pupils are more likely to be denied access to qualified teachers. Schools may be hiring teachers without QTS due to shortages of qualified teachers so there is a need to tackle the crisis in teacher recruitment and retention.