Comparing the Locus of Control of Young People in Foster Care

Research into whether the locus of control of children in foster care differs from that of children who have been adopted, children from disadvantaged backgrounds and children in the general population.

Full report: Comparing the Locus of Control of Young People in Foster Care

The term "locus of control" was first coined in the 1950s and refers to the attitude people have to events and outcomes in their lives. Individuals with an internal locus of control believe things that happen to them are the results of their own actions and behaviour. Meanwhile, those with an external locus of control believe things that happen are the result of outside forces such as fate, or are out of their control due to the actions of people more powerful than they are.

Dinithi Wijedasa, of the Hadley Centre for Adoption and Foster Care Studies at the University of Bristol, wanted to find out whether the locus of control of children in foster care differs from that of children who have been adopted, children from disadvantaged backgrounds and children in the general population. She analysed data from 36 children in foster care, 31 adopted children, and 33 children from a disadvantaged background for her paper People Like Me Don't Have Much of a Chance in Life.

The children, aged 14 and 15, were part of the Longitudinal Study of Young People in England, and were compared with a sample of 13,406 children from the same study who formed the general population group. 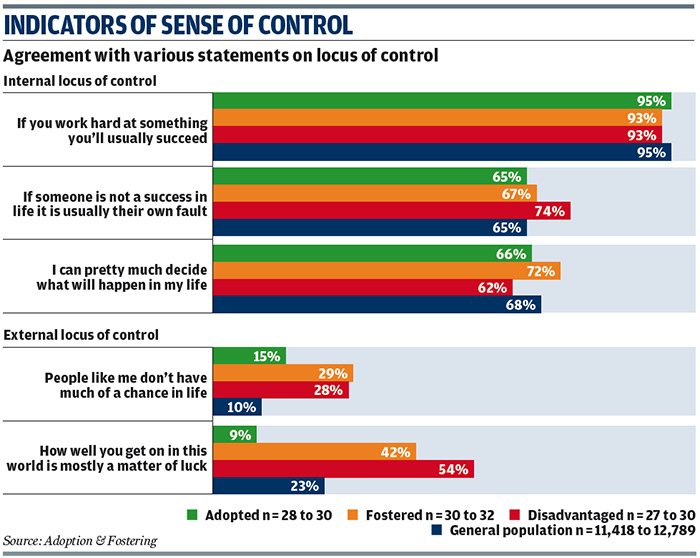 Children were asked how far they agreed with a number of statements. Young people in all the groups reported high agreement with statements indicating an internal locus of control such as "Working hard at school now will help me get on later in life", with no significant differences between the groups.

It is important to identify and establish policies and practice that could improve decision-making and permanency for children in foster care, addressing the lack of control brought about by constant moves, suggests Wijedasa. Children's locus of control is affected by the locus of control of those around them, so when foster carers feel disempowered this can affect the way the foster children perceive the world. Children in care may also feel more empowered through efforts to nurture their sense of identity such as contact with birth families and life story work.