An education select committee report concludes a factor in rising levels of school exclusions is that vulnerable pupils are not getting the support they need. The government is being urged to back inclusive school policies.

The number and proportion of children being permanently excluded from school are both continuing to rise, official figures published by the Department for Education show.

Persistent disruptive behaviour is cited as the most prevalent reason for permanent exclusion (see graphic) - with 2,755 instances in 2016/17, a rise of 19.3 per cent on the 2015/16 figure of 2,310. The next most common reason is listed as "other", although there is no official definition for the type of behaviour this could include. 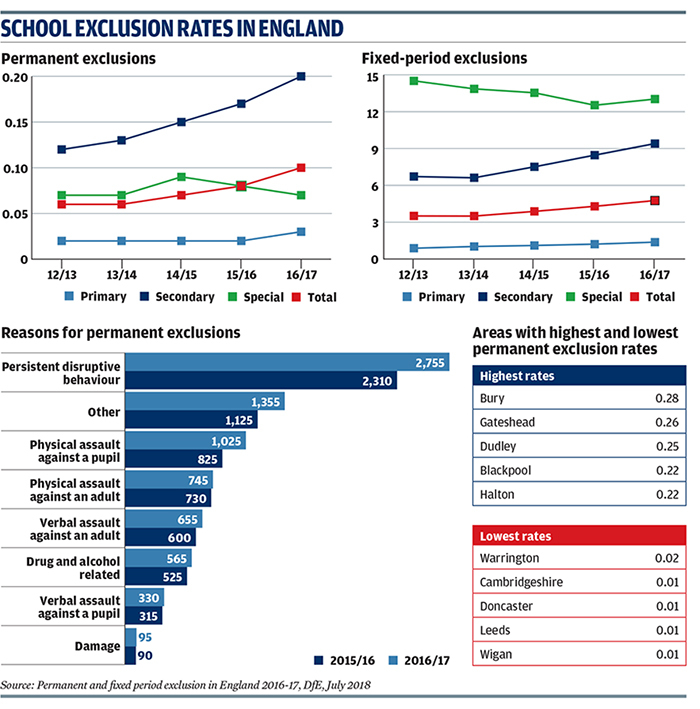 The DfE says this category should be used "sparingly" as the main reasons for exclusion should be covered by the other categories - physical or verbal assaults against a teacher or pupil, drugs or alcohol, damage, bullying, sexual misconduct, theft or racist abuse.

There continues to be a disproportionate number of children with special educational needs and disabilities (SEND) being excluded. Pupils with SEND accounted for 46.7 per cent of all permanent exclusions and 44.9 per cent of all fixed-period exclusions in 2016/17. Pupils with SEND support had the highest permanent exclusion rate at 0.35 per cent - six times higher than the rate for pupils with no special needs (0.06 per cent).

Ex-children's minister Edward Timpson is conducting a review of school exclusions to identify the issues and suggest solutions.

According to the education select committee, which conducted an inquiry into exclusions and alternative provision (see box), the rise is the result of a number of factors. One of these is finances, which can create circumstances in which schools are unable, or unwilling, to identify and address problems at an early stage.

Schools and representatives told the committee they no longer have the resources to fund pastoral support, including teaching assistants, that can help keep pupils in mainstream schools.

The National Education Union (NEU) says that excluding pupils can save schools thousands of pounds, because they no longer have to provide support for them.

She adds: "To best counter this, the government should change the accountability system so schools are given credit for working with children with complex needs."

According to the select committee's report, Forgotten children: alternative provision and the scandal of ever increasing exclusions, an increase in so-called "zero tolerance" behaviour policies has also had an impact. There are concerns that inflexible rules do not accommodate behaviour that arises from a child's special educational needs.

The committee concludes that while it would be reasonable for schools to take a zero-tolerance approach to drugs or weapons, a school culture which is intolerant of minor infractions of school policies on haircuts or uniform creates an environment where pupils are "punished needlessly". Instead, they urge flexibility and a degree of discretion.

The failure of the education system to adequately consider pupils with disabilities is at the centre of a current legal case involving a 13-year-old boy who was excluded from school due to behaviour linked to his autism.

The parents' legal team argue that existing regulations on exclusion discriminate against disabled children with conditions such as autism, which can result in physically aggressive behaviour.

Jolanta Lasota, chief executive of Ambitious about Autism, says it is a damning indictment of the education system that society's most vulnerable children are those most at risk of exclusion.

"Our recent research found that the number of children with autism being excluded from schools in England has increased by 60 per cent in the past five years," she says.

"These children should be getting extra support - but instead they are being sidelined. Parents can face an uphill battle trying to challenge schools' exclusion decisions and so we welcome the committee's recommendation for a ‘Bill of Rights' giving them more power and support.

"It's clear that we need to reset the scales in favour of inclusion in our system - and we hope the report's recommendations are taken up by the government's independent review of school exclusions, led by Edward Timpson."

There are also increasing numbers of children with mental health needs in schools and alternative provision.

In January 2017, 186,793 pupils in state-funded mainstream or special schools had social, emotional and mental health as their primary category of special educational need. But there are concerns that many more children go undiagnosed and, despite government pledges to improve support, there is a lack of expertise to deal with the issue in schools.

Stuart Gallimore, president of the Association of Directors of Children's Services, says increased accountability and competition in the school system, a "high stakes" inspection regime and significant exam, curriculum and funding reforms are resulting in a growing number of children and young people being "squeezed out of the mainstream school system or disappearing entirely from sight".

"We know children eligible for free school meals are more vulnerable to exclusion than their peers, as are children with SEND, from some black and ethnic minority groups and in care.

"For many, this is the first step along a journey that ultimately ends with social exclusion in adulthood too. This cannot be an accepted reality for our children and young people."

Expert view
We need school leaders who are passionate about inclusion

By Kiran Gill, associate fellow, Institute of Public Policy Research, and founder of charity The Difference

A number of different factors are behind the rise in exclusions including increasing numbers of children who have quite complex things going on at home. Year on year, there have been increases in the number of head teachers who are concerned about domestic violence and adult mental ill health. We know that in the general population, adult mental ill health is rising, so we have a growing number of children interacting with children's social care with quite complex needs where safety, wellbeing and learning needs can intersect, and that is really challenging for schools.

At the same time, there are perhaps fewer services than there used to be to intervene with some of those vulnerable people. Schools are doing the best they can, but there's not a lot of specialist training for how to work with children with social and emotional and mental health needs, and how to intervene with children who are at risk of particular safeguarding concerns, such as child criminal exploitation and child sexual exploitation.

We would like to see a career route that helps people get more specialist skills working with the most vulnerable on their way to leadership positions. In schools where there is incredible inclusive practice, where exclusion is low, the leader of the school has a wide lens on their role and prioritises investment in the most vulnerable, who often cost schools more than they bring in with their pupil [funding] allocation.

We need a career route to create more of those leaders who are passionate about inclusion. We also need more expertise and understanding of what works with those most vulnerable children, because once they get excluded, we have little evidence base of what is effective in turning them around.

It can be difficult to work with the most challenging pupils and it can take a lot of teacher time. We must think about whether we are investing everything we need to in the most vulnerable, because at the moment each excluded child goes on to cost £370,000 in lifetime costs to the state through extra benefits, health and criminal justice spending. It is better to foster healthy children than deal with broken and vulnerable adults.