With many areas struggling to meet expected standards for special educational needs and disability provision, senior Ofsted leaders outline to Jo Stephenson the characteristics of a good quality service.

Ofsted and the Care Quality Commission (CQC) are more than three years into a five-year joint inspection programme to assess the quality of support for children with special educational needs and disabilities (SEND) in all English local authority areas.

More than 100 have been visited so far, with inspectors keen to see how local partners are working together to plan and deliver services.

Of the inspection reports published to date (99) about half have identified significant weaknesses in local arrangements with councils and clinical commissioning groups required to submit a "written statement of action".

Between September 2018 and July 2019, 11 of those areas were revisited and five were found not to be making sufficient progress in addressing those weaknesses.

There has been dismay that the picture does not seem to be improving despite the fact that areas inspected later on have had a chance to see how others have fared and learn from key issues raised by inspectors.

However, the fact many are struggling to implement sweeping reforms - including the transfer of children with special needs to education, health and care plans - is perhaps a sign of the sheer scale of the challenge at a time when local authorities and health services are grappling with financial and demand pressures.

"It's right to have very high expectations for outcomes for these very complex children but in our local area inspections for SEND we're looking at a very complex environment between health and the local authority," says Ofsted's national director for social care Yvette Stanley. 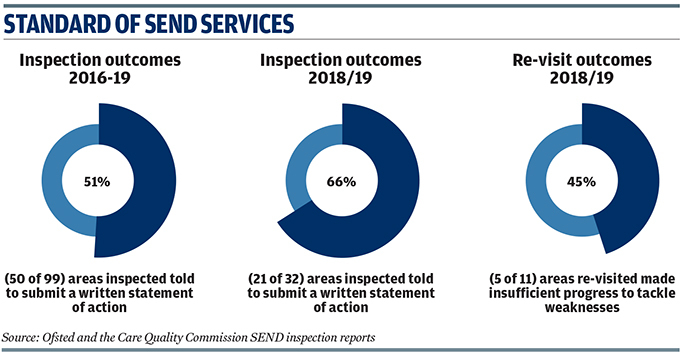 "The reasons we require a written statement as a result of those inspections were similar in 2018/19 as in 2017/18," says Nick Whittaker, HM inspector and specialist adviser on SEND for Ofsted.

"They understand what they are doing collectively for this really important group of children and understand what they need to do better," she explains. "They have very much got a joint needs analysis and are planning and commissioning services in a very joined-up way between health and the local authority."

That strategic-level joint working is then mirrored at practice level "so you see practitioners from the range of professions and range of agencies really working alongside each other and families to make a determined difference to children" and outcomes are improving as a result.

In the weaker areas the picture is often the reverse of that, says Stanley "so those relationships across the local authority and health aren't secure" and "there is that lack of self-awareness".

"That reflects down the system in terms of education, health and care plans not being finalised within the 20 weeks and the quality of those plans being really variable," adds Stanley.

There are concerns around health provision. "There tends to be very specific weaknesses in terms of the health strand of the planning and joined-up arrangements so health provision lacks specificity and the individual plans for children don't have meaningful outcomes related to children and young people's health," says Stanley who highlights the key role of "designated clinical officer".

There are ongoing concerns about how difficult it can be to get a diagnostic assessment for young people with autism and access to child and adolescent mental health services - something that will be examined in the latest round of joint targeted area inspections focusing on mental health.

Where areas are failing there is often a lack of "co-production" with families.

"It feels more fragmented to families, they can't understand the local offer and don't really feel they own or are partners in those individual plans for children," says Stanley.

Then there is the fact children with SEND are more likely to be excluded from school.

"We would want local areas to be working together with schools and wider partners to ensure children are getting the education they are entitled to because it is a really important lever for them to be as successful as they can be in life," says Stanley, who reveals Ofsted is planning some school-focused SEND research.

According to Whittaker, local leaders say inspection reports provide a "really incisive summary of what is working well and what could be better for children".

"They particularly value the dialogue they have with inspectors during inspections and that the reports are read widely - not just by those who we'd expect but by other leaders in other local areas," he says.

However, there has been some confusion about what happens when Ofsted has revisited an area and is still not satisfied with the progress made.

In this situation Whittaker is clear that it is for the Department for Education and NHS England to decide what happens next.

"We don't make referrals to the DfE, it is for the departments and ministers to decide how to respond to our findings and determine those next steps," he says.

"The guidance lists what some of those may be but does make it clear that Ofsted and the CQC will not carry out further re-visits unless we are directed to do so by the Secretary of State."

The local area SEND inspection handbook says next steps could include senior accountable officers meeting senior DfE, Department of Health and Social Care and NHS England officials, and the Secretary of State using powers of intervention.

For example, in June this year Sefton Council was issued with an improvement notice by the DfE after Ofsted found joint commissioning was "defective" and some aspects of provision had got worse.

The notice required the council and partners to produce an improvement plan with DfE and NHS England advisers providing regular progress reports to the DfE.

Going forward, Ofsted is keen to explore what lessons can be learned from the Inspection of Local Authority Children's Services (ILACS) regime and joint targeted area inspections to develop the SEND programme.

Some have suggested there should be a rating system as with inspections of schools and children's services but Stanley says this can be tricky with multiple inspectorates involved.

"We are evaluating the current inspection framework and methodology as part of shaping our thinking for the future and the minister has asked us to consider developing a post-2021 framework," says Stanley, who promises Ofsted will involve the sector.

Another area Ofsted is keen to develop is how to capture the lived experiences of some of the most vulnerable children who may not be able to communicate in conventional ways.

"We're really interested in feedback from colleagues who work closely with that group of children about how inspectors capture that because we clearly don't have those enduring relationships with these children," she says.