How England's largest authority is using online and one-to-one promotion to arrest a recent decline in the number of foster carers.

Foster care recruitment is a national problem. At a time when the number of children entering care has risen, some areas have seen their stock of foster carers fall.

Birmingham City Council - the largest in England - has seen an 11.7 per cent decline in foster carers between 2014/15 and 2016/17 (see graphics). Over the same period, the number of looked-after children cared for by the council has remained roughly the same, although the proportion in foster care has fallen from 73 to 69 per cent.

An additional factor for Birmingham has been the reputation problems the authority has experienced following a succession of "inadequate" Ofsted inspection judgments since 2009, and which have led to the creation of an independent trust to run children's social care services from next April. 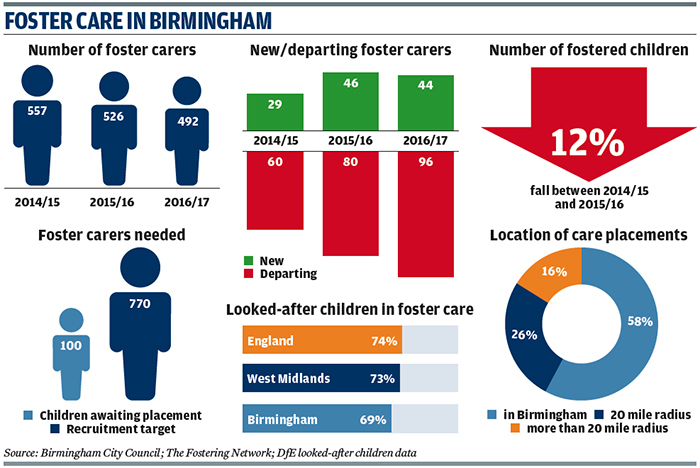 Three quarters of Birmingham's looked-after children population live within a 20-mile radius of the city and 98.6 per cent within a 100 mile-radius. However, the aim is to increase Birmingham City Council's own stock of foster carers. Nationally there has been a drop in applications to become a foster carer. Locally deregistrations have risen as many carers reached retirement age.

Finding carers for teenagers and sibling groups is difficult as many people are reluctant or nervous to take on more than one child. During Foster Care Fortnight, we launched, alongside 12 other West Midlands' authorities, a three-minute film, called Giants, about being a council foster carer for sibling groups. The film highlights the attachment that sibling groups have and the beneficial impact that keeping brothers and sisters together can have.

At the premiere, all the authorities spoke of struggling to recruit carers. We all have limited budgets, so collaboration helped produce a higher quality film.

We now use social media to promote events and communicate with the public about fostering. We ensure we are at the top of the search engine rankings when people are looking for information about fostering in the city. People still like face-to-face contact so we continue to run regular information events where people can speak to foster carers.

The key attribute when recruiting foster carers is to engage those who have experience of caring for children - whether through being a parent, working in child care environments or from volunteering. It is about supporting children during their time in care and in some instances transitioning them back to their families or other permanent arrangements.

As part of its approach to corporate parenting, Birmingham City Council has written a list of 10 promises - the Birmingham Pledge - of what children in care told us is most important to them. This includes listening to their views, supporting their health, education, hobbies, interests and talents, and is in addition to maintaining contact with their birth families and helping and supporting our young people into adult life.

Foster carers play an essential role in supporting the Birmingham Pledge alongside other professionals such as health, education and social workers.

People do sometimes raise the issue of the council's reputation, but the fostering service has gained positive feedback from foster carers. I have worked for Birmingham City Council for 32 years - I'm proud of our service and our children, and we want the best for them. It is about getting that message out there.