Just over 60 per cent of the 83,175 approved fostering places in England last year were provided by local authority-run services.

The total number of foster care places available last year fell slightly. However, the number provided by local authorities saw a five per cent increase from 49,080 in 2015 to 51,665 in 2016.

According to Ofsted's Fostering in England 2015/16 report this increase is down to an emerging trend in the sector: a growth in the number of "family and friends" placements where children are fostered by someone they already know.

The total number of family and friends households increased to 4,665 as of March 2016 - up 13 per cent on 2015 - with the vast majority approved by local authorities. Only a handful - 20 or so such fostering households - are provided by the independent sector.

While there are social and emotional benefits in placing children with extended family, Ofsted's report suggests one motivation may also be cost.

"The increase in the number of family and friends households could be linked to local authorities trying to reduce the cost of in-house fostering," says the report.

Unlike adoption performance, fostering does not have a separate inspection judgment as part of Ofsted's single inspection framework regime for councils.

However, the regulator's 2016 annual report on social care paints a generally positive picture of the quality of local authority fostering agencies.

"Our evidence shows a largely positive picture of the support that foster carers receive from local authorities, with several outstanding examples of high-quality, innovative work," states the report.

"As with independent fostering agencies, however, there is a small minority of local authorities who are failing to provide consistently the quality of training and support that all foster carers should expect and deserve."

Other indicators of quality include measures of placement and education stability, and other welfare factors. However, variations between local authority and independent sector care often reflect differences in types of provision offered by the two sectors with independent fostering agencies tending to offer more specialised care for children with additional and complex needs.

Ofsted's data also shows three quarters of long-term households offering multi-dimensional treatment places are in the independent sector. Independent agencies generally have larger fostering households on their books with 39 per cent approved for three or more children compared with 26 per cent of local authority households - although councils have slightly more in terms of actual numbers (see graphics).

Half of local authority households approved in 2015/16 were approved for one child only.

When it comes to placement stability the Ofsted report shows 2,910 children in 2015/16 experienced "unplanned endings" to their foster placements. Three quarters were placed with local authority carers. However, this statistic reflects a change in the way data is collected that only registers an unplanned ending if the child remains with the same agency - much more likely for children placed by local authority fostering services who will simply move to another carer on that council's books.

The number of children who experienced physical restraint in local authority foster care dropped by 13 per cent from 155 to 135, three times lower than the rate of restraint in the independent sector.

The Children and Families Act 2014 introduced a new duty on local authorities in England to support young people in foster care to stay in their placements after the age of 18.

However, there is concern that implementation of so-called "Staying Put" arrangements is patchy and in September this year the Fostering Network published new guidance to promote best practice.

This urges fostering services to view Staying Put arrangements as the norm and says they should "start planning for staying put as early as possible via the care, placement, permanence and pathway plans".

The Fostering in England report shows the percentage of care leavers staying on with their foster families when they reach 18 has increased to 54 per cent (see graphics).

While there has been a dearth of government policy on foster care in recent years this may change following a government-commissioned "stocktake" of foster care led by Sir Martin Narey and senior social worker Mark Owers, which is due to report back in December. 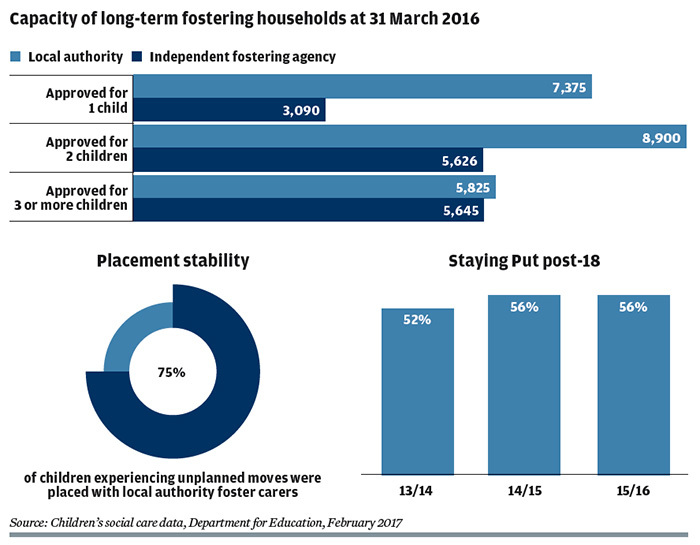 North Lincolnshire Council has invested heavily in its fostering service and carers in order to ensure the best outcomes for children, according to responsible officer for regulated support Tracy Eaden.

"A very successful sufficiency strategy ensures that the vast majority of children who are looked after by North Lincolnshire live near to their families, friends and schools, and that disruption to their lives is minimised," says the council's latest Ofsted report, published in September.

The authority, which is rated outstanding, currently has 225 children in care with 83 per cent in foster care - of those, 94 per cent are in council-run provision.

It has offered care beyond the age of 18 for many years - long before Staying Put requirements were introduced.

"The biggest key to success is fantastic foster carers who are committed to children in care and ensuring they live safe, secure and fulfilling lives - and that is about having carers that feel valued," says Eaden.

The council runs a range of events to celebrate and recognise the work of carers who are seen as "very much part of the team". It also strives to ensure foster carers, children in foster care and carers' own children are fully involved in the development of the fostering service.

Meanwhile, children in care are involved in the recruitment of both carers and staff who work for the fostering service, including interviewing applicants and visiting prospective foster carers at home as part of the assessment and approval process.

It provides a comprehensive training programme for foster carers and all have an annual review of their training and development needs.

As well as regular contact with supervising social workers, carers are paired with a more experienced "foster carer buddy". Additional practical support is on offer where placements are challenging or fragile and foster carers have access to a counsellor.

In 2011, the authority introduced a six-month timeframe for approval and assessment. At the same time, assessing social workers, and supervising and support social workers were split into separate teams.

"That means that if there is a crisis, it's a supervising and support social worker that goes out and we're not cancelling assessment appointments," Eaden explains.

Innovations include the council being recognised as a "foster-friendly employer" offering carers paid leave to attend training, meetings and appointments and settle in new children. All council staff can do a short online course to become a "fostering ambassador" and wear a badge that says "ask me about fostering".