The standard of support for care leavers is cause for concern for Ofsted, with high proportions of young people struggling in the transition to independent living after leaving council care.

"The evidence suggests that local authorities are not always sticking with care leavers for long enough to ensure that they find their place in the world. The support for them is too variable," says the report. "Often, it lacks a tenacious, ambitious approach to support them to grow up, leave home, and find rewarding work and further education."

At the time of publication, 57 per cent of local authorities had been inspected under the Single Inspection Framework (SIF) and just two per cent were rated "outstanding" for leaving care services.

In all, 34 per cent were rated "good", 49 per cent "requires improvement" and 14 per cent were judged "inadequate" for the experiences and progress of care leavers.

Out of the three sub-categories that get specific ratings under SIF, which also include looked-after children achieving permanence and adoption performance, the leaving care category was most likely to be rated inadequate.

The very latest SIF inspection data collated by the Association of Directors of Children's Services shows that of the 142 councils inspected to date, eight (5.6 per cent) have been rated outstanding for leaving care services with 17 (11.9 per cent) rated inadequate (see graphic).

The majority of councils inspected since April 2015 were doing well when it came to keeping in touch with care leavers. However, the proportion of care leavers up to the age of 21 not in contact is 13 per cent. "This represents 3,390 young people who are not receiving any support and whose current whereabouts and situation are completely unknown," states the report.

Meanwhile, the preparation and planning local authorities do for children's futures is described as a "serious weakness" by Ofsted with nearly two thirds of inspections resulting in recommendations to improve the quality of "pathway" plans.

One major change has been the increased emphasis on supporting young people beyond the age of 18 under "Staying Put" arrangements launched in May 2014. However, the Ofsted report says such opportunities are "not yet consistently robust" and nearly a quarter of councils should do more.

In 2014/15, there were 1,790 young people aged 18 still living with foster carers under Staying Put - an increase of two per cent from the previous year.

Where care leavers move into independent accommodation, there is a requirement that it be "suitable". The report states 80 per cent of care leavers were in "suitable" accommodation. However, the National Audit Office has questioned whether the definition of suitable is sufficiently clear.

"In the best local authorities, there are productive partnerships with housing colleagues and a range of supported accommodation providers, and young people's wishes are taken into account," states the Ofsted report. "In some local authorities, practice is unacceptably poor."

Looked-after children and care leavers are much more likely to experience mental health difficulties than other children yet inspections have found councils don't always take the mental health needs of this group into account.

In March 2015, the Department of Health issued guidance on promoting the health and wellbeing of looked-after children, which emphasised the need to ensure care leavers make a smooth transition to adult services, allowing for a more flexible approach.

However, "there has been no discernible trend of improvement", says Ofsted, which says it will continue to review the issue and it may be the focus of a joint targeted area inspection with partner inspectorates in the future.

In the year ending March 2016, just 60 per cent of care leavers aged between 19 and 21 were in education, employment and training compared with 85 per cent of all children.

However, the Ofsted report stresses that having a high proportion of care leavers who are not in education, employment or training (Neet) "is not an inevitable by-product of their experiences".

It cites Salford as an example of an authority bucking the trend - 78 per cent of its care leavers are in education, employment or training, just seven percentage points below the national level for all young people. Ealing is another performing well in this area (see case study).

"While parity with other young people whose lives were not affected by abuse or neglect may not be achievable for all children, it is entirely realistic to look for more local authorities to deliver to the level of the best," says the report.

Five per cent of care leavers aged 19 were in higher education in 2013/14 compared with a national average of 33 per cent. Key developments to address this include the introduction, under the Children and Social Work Act 2017, of a requirement for councils to provide personal advisers to care leavers up to the age of 25. 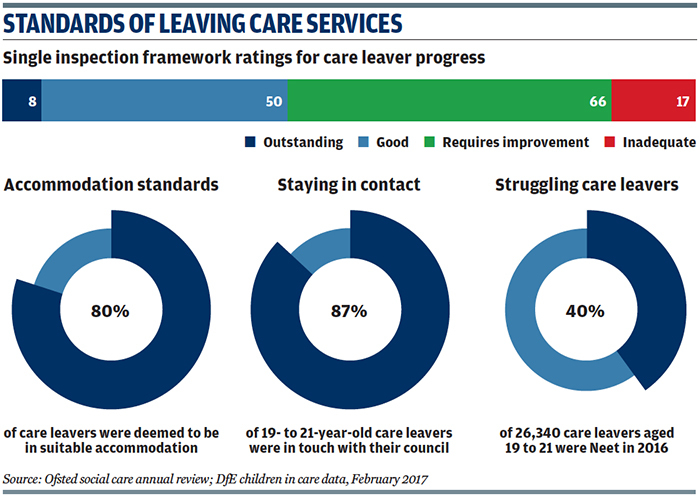 The London Borough of Ealing is one of a handful of councils rated "outstanding" for services for care leavers.

"The vast majority of care leavers live in suitable accommodation, are supported to develop their independent living skills, are encouraged to aim high and to do well in education, employment or training, and have comprehensive information about their health histories," says Ofsted's latest inspection report, published in August last year.

At the heart of Ealing's approach is the Horizons Centre, which brings together a wide range of support in one place.

"It's not a council office-type building, it's an informal, youth-friendly, modern, well-equipped centre," says Marcella Phelan, assistant director for children and families.

Here young people can get help with housing, health, finances, legal and immigration issues and learn important life skills such as cooking and learning to budget.

While Horizons is ostensibly for those aged 17 to 24, the leaving care team does not turn any Ealing care leaver away - no matter how old.

"The main thing is it is a community, like a family where a lot of people care about you - it doesn't matter if you left care last month or 10 years ago," says Phelan.

Overall corporate parenting at the council "is outstanding, showing real passion, ambition and creativity to ensure that children reach their full potential", says the Ofsted report.

The "highly effective" corporate parenting panel is chaired by the council leader. It is attended by senior officers, councillors and young people and is a forum for "full and frank debates about what is working well in the care system and what isn't", says Phelan

Ealing has three children in care groups including the Shout Out Forum for 16- to 26-year-olds, which advocates and campaigns for care leavers. For example, the group achieved an increase in the leaving care grant after demonstrating the true cost of furnishing a home.

There is a focus on education with plenty of "positive role-modelling", including a peer mentoring scheme that involves care leavers who have gone to university or into employment working with those in years 9, 10 and 11.

Ealing's virtual school has a head teacher and five teachers - one focuses on post-16 learning and supporting higher education applications; 20 per cent of Ealing care leavers go to university.

For some a vocational route is more appropriate, and the council runs a range of pre-employment programmes as well as an in-house apprenticeship scheme.

The Pathways project is for those not quite ready for an apprenticeship. The council recently set up a pre-Pathways scheme called Ecotalent "because we recognise there are some very vulnerable young people for whom just the routine of getting up in the morning and turning up somewhere is too much", says Phelan.

There is 80 per cent progression on pre-employment programmes. Overall, 67 per cent of care leavers are engaged in education, employment and training compared with the national average of 48 per cent and a London average of 54 per cent.