Narrowing the attainment gap between disadvantaged pupils and better-off peers is a key challenge for leaders across all types of schools and one which Ofsted is keeping a close eye on, reports Jo Stephenson.

Reducing the gap in attainment between disadvantaged pupils and their peers has proved to be a stubborn problem. A recent report by the Education Policy Institute suggests that if the current pace of progress is maintained it will take 100 years to completely close the gap.

Chris Mathews, outgoing commissioner for education improvement and efficiency at Shropshire County Council, admits it is not something his authority has cracked yet.

"We have the aspiration, ambition and the commitment just like every other local authority in the West Midlands and beyond," he says. "The issue is we do not have the resources."

Reduced funding for both local authorities and schools - and less capacity for councils to intervene to address inadequate provision and co-ordinate school improvement efforts - has made narrowing the gap more difficult for everyone, he maintains.

Substantial attainment gaps in Shropshire's Key Stage 4 results came to the attention of Ofsted and in 2016 led to the authority being featured on the BBC's Inside Out West Midlands programme.

"We had the regional head of Ofsted on camera saying she was appalled at the gaps in Shropshire," recalls Mathews.

"We were being compared with Birmingham because the premise of the programme was you'd expect disadvantaged pupils in Birmingham to do less well than children in ‘leafy Shropshire' - although Shropshire is not particularly leafy and we have rural deprivation as opposed to urban deprivation."

Had funding for all primary and secondary schools in Shropshire been modelled on the Birmingham funding formula they would have been £27.5m better off, points out Mathews.

Shire counties like Shropshire face specific challenges not least the fact funding is "much lower" despite the increased cost of educating children in rural areas, he explains.

While they tend to have a lower percentage of disadvantaged pupils, they often have the largest gaps. Then there is the fact that pupil outcomes are more volatile with a high proportion of small schools.

Yet while context is important, Mathews stresses it must not be used as an excuse for failing to address attainment gaps - echoing Ofsted's national director for education Sean Harford in a recent blog on deprivation and school inspection.

Shropshire is implementing a range of measures. Together with neighbouring authority Telford and Wrekin and the Teaching School Alliances that exist across the two local authorities, the authority put in a successful bid to the Strategic School Improvement Fund. That resulted in £250,000 coming into Shropshire schools targeted on those with the poorest outcomes and biggest achievement gaps with national leaders of education working alongside leaders and staff.

"It is a five-term project and we are in the fourth term of work so it is a little bit early to ask ‘Has it had an impact?'," says Mathews. "If we don't see an impact in the 2019 outcomes for those schools then we'd have to say ‘no it hasn't' but I hope very much that it will."

The authority has also initiated a programme of targeted work with schools to boost outcomes in the early years with a focus on literacy and numeracy.

Meanwhile, its special educational needs and disabilities (SEND) team has been successful in working with schools to support the attainment of SEND pupils - one group that tend to lag behind their peers nationally.

While there is much that can be done at a local level, one of the key areas that needs to be addressed nationally is the narrowing of the curriculum due to an over-emphasis on exam performance and test results, says Mathews.

This has been recognised by Ofsted, which has promised its new education inspection framework - to be introduced from September - will focus less on performance data and more on whether a school's curriculum meets the needs of all pupils.

However, this creates a "real dilemma" for schools who know that providing a broader curriculum may well have a negative impact on results.

"If you're a secondary head teacher and you know Ofsted is coming then it's a brave head that will go in there with performance data that is not as good as it could be," says Mathews.

Nevertheless he is hopeful the new inspection framework will support efforts to narrow the gap - he outlines the five key principles underpinning this work in Shropshire (see box).

"We want inspections to be rigorous, to be fair and to provide a basis for school improvement," he concludes.

KEY PRINCIPLES FOR NARROWING THE GAP

1) Recognise and accept the challenge. "It is absolutely critical we take on the challenge - that having gaps is not something we're happy to accept," says Chris Mathews, outgoing commissioner for education improvement and efficiency at Shropshire County Council. "There is no reason why children from a disadvantaged background should do worse than those from a more advantaged background."

2) Understand the context. The challenge of narrowing the gap is not a single issue so context is all-important, stresses Mathews. "Recognise the context of particular areas - even particular schools - and it is critical to identify the under-performing groups of children and the specific challenges they face," he says. For example, narrowing the gap in Shropshire, which is predominantly white British, is very different to narrowing the gap in more metropolitan and urban parts of the West Midlands such as Birmingham, Sandwell and Dudley.

3) Champion accelerated progress. "In terms of leadership it's really important that in schools and early years settings there is somebody to champion the cause and to ensure a consistent commitment across staff to raising the aspirations and confidence of children and pupils," says Mathews. It is not enough for children to make expected progress - those that are behind need to make accelerated progress in order to catch up. "This is not just about interventions but also about putting Quality First teaching in place."

4) Work needs to extend beyond schools. "It's a bit like safeguarding - if we're going to crack it, it needs to be everyone's responsibility," says Mathews, who says narrowing attainment gaps requires a multi-agency effort that includes early help, social care and others as well as work with parents and carers. One step Shropshire has taken is to invest in family support workers with half the cost funded by the local authority and half by schools. "That has enabled some direct work with schools and the families of disadvantaged pupils to support them in basic things like attendance," says Mathews.

5) Collaboration gets results. Directors of children's services and education leads at authorities across the West Midlands have been working together with a focus on education including addressing attainment gaps. Joint work at school level is also key, says Mathews. "There is enormous value in collaboration rather than competition," he stresses. 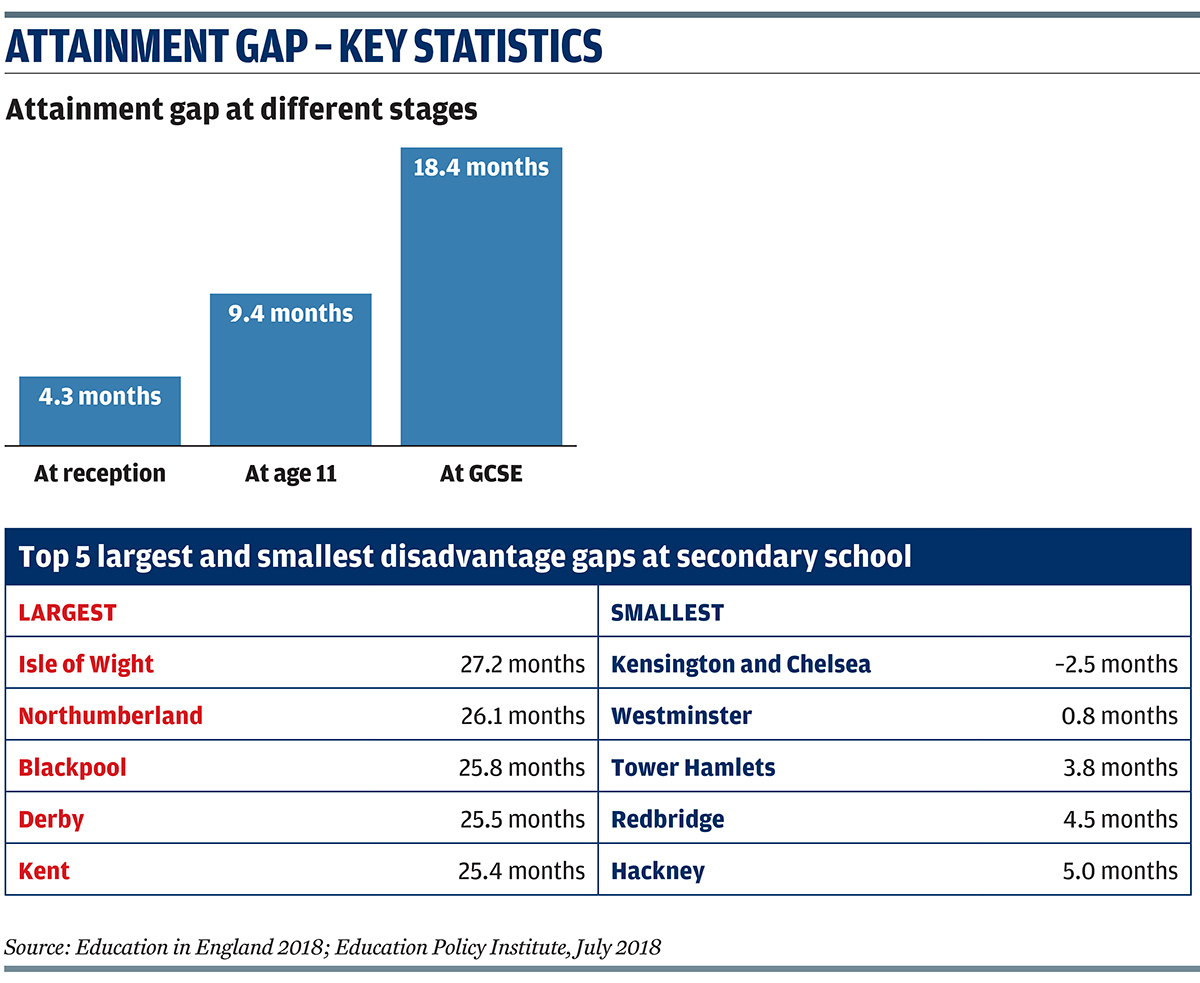 EDUCATION
Colleges must do more to ensure students taking Level 2 qualifications such as GCSEs and NVQs achieve their full potential, says Ofsted. The call comes after a major piece of research on the curriculum available to the 170,000 students on Level 2 study programmes, who have often been "less visible" in post-16 education than those who move directly to Level 3 qualifications like A-levels after completing GCSEs. Key recommendations include the need for colleges to work more closely with local employers to design courses suited to students' needs.

SOCIAL CARE
Inspectors have raised concerns about a scheme that brings children's and adults social workers together to prevent children being taken into care. A full inspection of children's services at Hertfordshire County Council found its Family Safeguarding initiative had resulted in improvements for most children. However, there were cases where social workers and managers displayed "a degree of naivety and/or over-optimism" and had failed to achieve the right balance of support and challenge. They found senior leaders were taking action to address this with children's services provision rated "good" overall.

YOUTH JUSTICE
Local agencies must learn lessons from past sexual exploitation cases if they are to respond effectively to "county lines" drug running and other forms of child criminal exploitation, says a new report. The thematic report by Ofsted, HMI Constabulary and Fire &amp; Rescue Services, Care Quality Commission and HMI Probation also calls on partners not to underestimate the risk of child criminal exploitation in their areas. Based on inspections of services across three local authority areas, it highlights the need for good information sharing, and training to ensure children are seen as victims rather than perpetrators of crime.

EARLY YEARS
Childminders in Greater London can now register with Ofsted via a new pilot service, due to be rolled out to other areas soon. The trial service, which was launched in November, allows childminders to register via the gov.uk website. Ofsted is asking users for feedback to help shape the service going forward.

SOCIAL CARE
Services in Cornwall have been praised for their work to tackle child sexual abuse and support victims including a focus on working with whole families. A joint targeted area inspection by Ofsted, HMI Constabulary and Fire &amp; Rescue Services, HMI Probation and the Care Quality Commission flagged up the high standard of direct work with children and the wide range of specialist support on offer across the large rural county.