Updated government guidance aims to improve how schools respond to child neglect, reports Jo Stephenson. NSPCC expert outlines what schools should do to meet the new standards that Ofsted will inspect against.

The issue of child neglect has come into the spotlight in recent years amid concern it is not always recognised or dealt with appropriately.

Schools have a key role to play in identifying and tackling neglect not least because they are in daily contact with pupils.

Earlier this year, Ofsted and the inspectorates for police, health and probation published a report based on six joint targeted area inspections (JTAIs) focusing on the neglect of older children aged between seven and 15.

The report, which suggests neglect of older children often goes "unseen", found schools were "especially important" in providing support to this age group as part of a multi-agency response.

The Growing Up Neglected report found additional support in school was helping ensure neglected children accessed education and could begin to achieve their potential - including during transitions from primary to secondary school, which can prove particularly challenging for children who lack stability at home.

It also found school nurses made a big difference although many school nursing teams have been hit by cuts in funding and staff.

"We saw school nurses in some places making a big difference to older children by identifying neglect that had previously gone unseen, as well as working with children and parents to address it," said the report.

"However, the limited capacity of the school nursing service in some areas was limiting the quality and breadth of work that school nurses were able to provide."

Inspectors found schools had the potential to be a strong advocate for neglected children - a role made easier in areas with clear processes for escalating concerns with multi-agency partners.

"Schools in particular were providing challenge to poor decision-making about older children. They also escalated concerns about delayed responses to older neglected children, such as the lack of progress of work to support and protect them," said the report.

At the start of the 2018 academic year, the Department for Education updated its statutory guidance to schools on safeguarding, which emphasises the need for all staff to be aware of the signs of abuse and neglect and know what action to take if they have concerns - such as speaking to the school's designated safeguarding lead.

Keeping Children Safe in Education guidance states that schools need to recognise there may be "additional barriers" when it comes to recognising abuse and neglect in children with special educational needs and disabilities. They must also have robust procedures in place for when children are missing from education - which can be a warning sign of neglect.

All staff should receive regularly updated safeguarding and child protection training as well as regular updates on effective practice, says the guidance.

The JTAI report on neglect found partnership work between organisations such as local authorities and schools was key and joint training could support that. 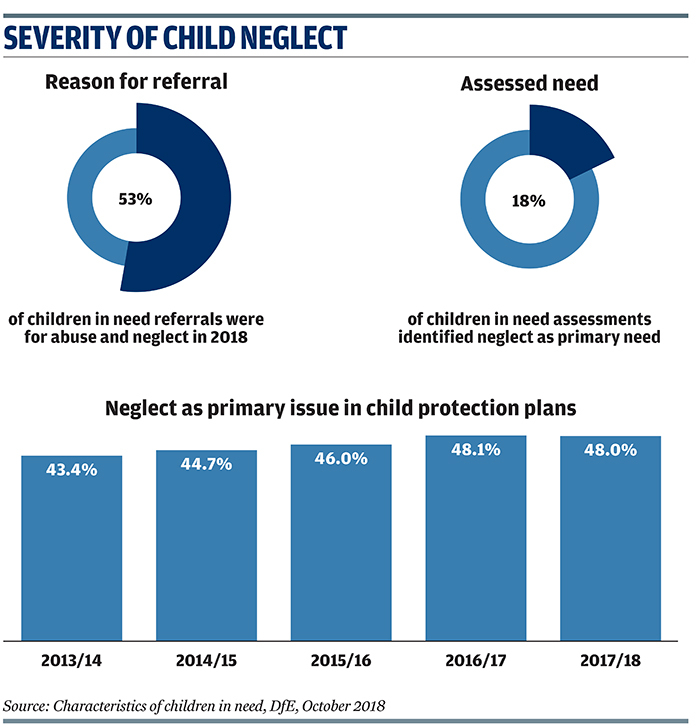 1) Leaders have a key role. Neglect is an issue that school leaders and senior managers need to have on their radar to ensure they can respond to any potential cases appropriately. A school's designated safeguarding lead should do specific training to ensure they can spot the signs of neglect and understand how to deal with the problem.

2) All staff must be clued up. Neglect should already be included as a specific type of abuse in a school's safeguarding policy. All school staff should be aware of the definitions in the DfE's Keeping Children Safe in Education guidance. All staff are required to read part one of the guidance and schools should have a record of this. The school's procedures for reporting concerns about neglect should be followed and all staff should be aware of the process.

3) Neglect manifests in different ways. There is often no single indicator that a child is being neglected, with physical and emotional neglect having different signs. You may notice more than one sign and your concerns might become more frequent if problems are mounting up. This could indicate that a child and their family need support. Ensuring the best possible pastoral support is offered to pupils and their families can make a huge difference in encouraging families to engage with services that can help them.

4) Signs of physical and emotional neglect. Some signs of physical neglect include (but are not limited to) poor appearance and hygiene, including having unwashed clothes, being dirty or not having correct clothing for the weather conditions. The child may also have developmental and health problems such as untreated injuries, dental issues, or skin infections. Signs of emotional neglect can be more difficult to identify and can include struggling to control emotions or having extreme outbursts, seeming isolated from their parents or lacking social skills.

5) Take action. If a school suspects a child is suffering from neglect they should follow their safeguarding policy and deal with the situation appropriately. Often when neglect is the concern, it won't meet the threshold for action by social care, therefore the school may need to make a referral to early help services, or record and monitor the situation. A chronological record of each concern, action and outcome can act as a robust piece of evidence if further action is needed.

6) There may be other issues. Neglect rarely happens in isolation and there could be other factors impacting that child, their siblings and family. Advice can be sought from children's services. Anyone with concerns about a child can also contact the NSPCC helpline. The NSPCC's Graded Care 2 Profile is a useful tool for professionals when assessing the level of care given to a child and what next steps may be needed to ensure the child is kept safe.

7) Share good practice. Local authorities, multi-academy trusts and other school networks should facilitate sharing of good practice and resources to ensure tackling neglect remains a priority. Senior leaders should ensure schools know about different services and organisations that can help families where they suspect the child is suffering from neglect. Sharing good practice is a way of getting peer support to deal with concerns. At a strategic level, there should be regular opportunities for designated safeguarding leads to meet either face to face or online.

EDUCATION
Ofsted has called for action to address loopholes in the law that may make it easier to set up illegal schools. The call comes in the wake of a landmark court case which saw the first ever prosecution for running an unregistered school. Ofsted's national director of education Sean Harford said there was a need for legal definitions of the terms "full-time education", "schools" and "appropriate education" to help clamp down on schools that were not serving pupils well.

SOCIAL CARE
The number of child deaths or serious injuries reported to Ofsted by local authorities has decreased in the past year but the number of suicides has gone up, show the latest figures. Between April 2017 and March 2018, there were 384 incidents in which children were seriously harmed or died. This is an 11 per cent drop compared with 2016/17 and represents a return to the level of previous years. However, the number of suicides increased from 35 in 2016/17 to 46 in 2017/18.

EDUCATION
Ofsted is to investigate why efforts to improve the quality of education in some schools - including inspection - don't seem to be working. In a letter to the Commons public accounts committee on major risks to the quality of education, Ofsted chief inspector Amanda Spielman said the regulator would undertake an evaluation project next year to look at the problem of "intractable" schools caught in a cycle of poor performance. She also highlighted lack of funding and a narrowing of the curriculum as key issues hampering the effectiveness of schools.

EARLY YEARS
There has been a high level of interest among practitioners and others keen to join Ofsted's new early years forum. Ofsted's deputy director of early education Gill Jones told delegates at the Ofsted Big Conversation in London that about 1,500 applications had been received for the Early Years Pedagogy and Practice Forum. She said the regulator recognised the need to ensure more of a focus on early years and communicate better with frontline staff.

HEALTH
An NHS trust at the centre of an investigation into baby deaths has been placed in special measures. Shrewsbury and Telford Hospital NHS Trust will receive extra support and funding as a result of the move announced by NHS Improvement. It follows inspections by the Care Quality Commission, which revealed serious safety concerns about maternity and urgent care and led to conditions being placed on the trust's registration. An independent review into baby deaths, brain injuries and maternal deaths was commissioned by government in 2017.