The recent legal case of a boy whose local authority reduced his education, health and care plan (EHCP) so that an unsuitable school would admit him, shines a light on the shortage of appropriate local provision, and a system under financial pressure.

While the sector welcomed the ambition behind the 2014 special educational needs and disabilities (SEND) reforms, children's services leaders are concerned that a lack of funding to deliver them is fuelling demand for high-level support packages, exacerbating financial pressures.

February's High Court finding that Medway Council acted unlawfully in its treatment of the eight-year-old boy, left the council with an estimated bill of £40,000, and could lead to further challenges by schools over the suitability of council placements. 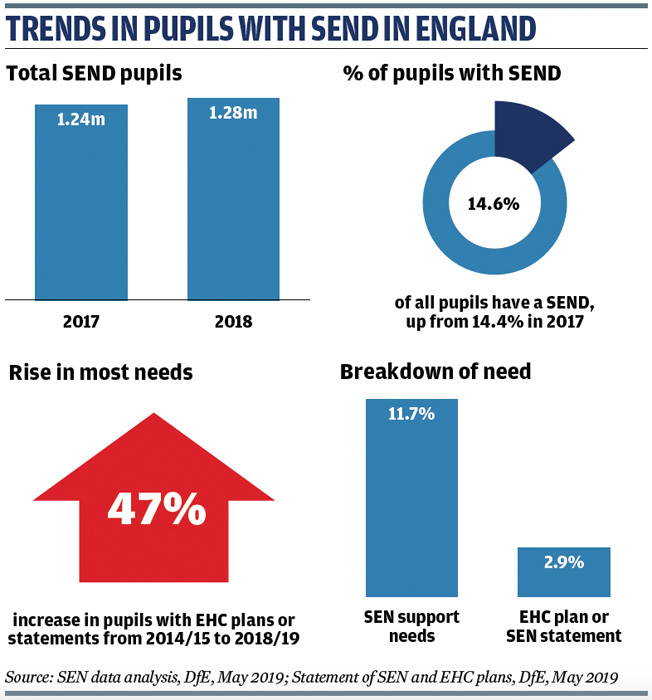 Other judicial reviews are set to come to court soon, including one brought by a group of parents seeking to prove that government has acted unlawfully by underfunding the reforms.

The pressures have arisen despite the Department for Education increasing "high needs" funding for councils, from £5bn in 2013 to £6.3bn this year, to support children with the highest needs.

According to the Local Government Association (LGA), councils' SEND budgets are estimated to be £800m short this year, rising to £1.6bn by 2021.

Indicators are that financial pressures alongside the reforms are resulting in a deterioration in the quality of provision - the proportion of EHCPs prepared within the required 20 week timeframe has fallen from 65 to 60 per cent in the past year.

Meanwhile, around half of inspections of local SEND services are being required to write written statements of action due to significant weaknesses.

Of those which have been revisited, some have been referred to the DfE for lack of progress, although there are positive examples (see box).

Families with SEND children are also increasingly unhappy - in addition to pending legal action, more than 5,000 cases have been taken to the SEND tribunal and in May a national day of protest was held.

Is change around the corner?

In a sign that policymakers recognise the pressure in the system, the DfE announced a call for evidence - until 31 July - on ways that funding arrangements could be improved.

The education committee, which has been holding an inquiry into SEND, could recommend the creation of a national template for EHCPs to help improve practice.

A new SEND leadership board aiming to drive improvements in local services and share best practice nationally, has also met once and is in the process of appointing an independent chair.

The sector is broadly in agreement that without more money, the crisis will deepen.

In its LGA-commissioned report on SEND, published in December 2018, ISOS Partnership describes the 2014 reforms as a key driver of increased demand for SEND support.

Parents' expectations for SEND provision in schools were "appropriately and significantly raised", a move that was widely welcomed, the report states.

However, Charlotte Ramsden, chair of the health, care and additional needs policy committee at the Association of Directors of Children's Services (ADCS), says that a key problem nationally is the "level of expectation hasn't been sufficiently funded".

Ramsden, who also sits on the leadership board, particularly identifies the extension of EHCPs to 19-25 year olds as a "big challenge".

The National Education Union joint general secretary Mary Bousted agrees, claiming: "The government made a miscalculation about how many parents would want to take that up."

This has raised the pressure on councils' high needs budget; previously this support would have been funded by adult services. Increased post-16 responsibilities was the top factor given by councils for pressure in their high needs budgets in the ISOS survey.

The movement of pupils with EHCPs out of mainstream schools and into more expensive special schools has also cost an estimated £277 million over four years.

According to the report, local areas are particularly concerned about the increased reliance on the independent or non-maintained sector, because local special schools have reached capacity, which in turn drives pupils into more expensive special schools out of borough.

For Bousted, one way of easing pressure would be better investment in early intervention so that "children with SEND have their needs met before reaching a state of crisis".

Council for Disabled Children director Christine Lenehan, suggests that earlier help could avert the emergence of some special needs.

She cites the example of a child who was not properly supported following the death of a parent, became violent, and eventually received a special needs diagnosis relating to their social, emotional and mental health.

However, other changes need to be made, she adds. First, too many EHCPs are being sought by practitioners and parents when most children "don't need it", she says.

The main problem is a lack of clarity about the legal rights of children and families, and the responsibilities of local authorities, schools, health agencies and social care services. Too much focus has been placed on EHCPs, meaning that "everyone decided they were the only game in town, adds Lenehen".

This is borne out by the most recent DfE data showing there has been a 47 per cent rise in the number of children and young people with EHCPs or a statement of SEN.

Lenehan says there needs to be a national template for EHCPs to help address this, and to "make the system fairer and more consistent".

If a higher bar was set for EHCPs, she says, this would need to be backed by better support for wider special needs.

Lenehan is concerned that far from instilling local partnership working, in some areas professional silos have consolidated to "protect budget and sanity".

Can the sector do better locally?

Lenehan believes that councils and schools should be approaching local challenges more constructively by asking themselves: "Are we spending money in the right place?"

For example, she believes that some authorities are better at planning for school places in advance, and some schools could make better use of teaching assistants, by using them more flexibly.

There are also "inequities" in the levels of high needs funding that councils pass to schools, as well as too much spending on non-maintained and independent special schools.

Lenehan also believes that poor communication with families and delays in support create a greater likelihood of a case going to tribunal, ultimately raising costs.

"We spend a huge amount of money on the battle ground," she says. "If families know help is coming, they're less likely to ask for more than they need."

Lenehan suggests that some schools could have better leadership on inclusion, and therefore reduce the chance of children needing more costly provision.

"I don't think schools are taking their equality duties seriously enough," she says.

Ramsden is more sympathetic. "Schools are in a very difficult position," she says.

"They are challenged budget wise but also on expectations around academic outcomes, so if they've got children with an EHCP, that's acknowledged, but if they've got SEN support then those results count as part of GCSE outcomes and key stage 2 [results].

"If they're going to be criticised for results, when they've been inclusive, then that's difficult."

On quality of EHCPs and inspection reports, Ramsden acknowledges that councils are at "different stages" as to how well they are complying with the 2014 reforms.

While there are examples of improving provision, Ramsden acknowledges the need for councils to work on what can be done better, particularly with families.

Kent local area was criticised by the inspectorates earlier this year, for leaving parents feeling they were "not able, or in some cases not willing, to meet their children's needs", and the local area was required to produce a written statement of action (WSA).

Ramsden observes that revisits only started in January, so how councils have done remains to be seen.

"Most know where they are up to - it's not a surprise," she says, "but a WSA brings an expectation that we need to clarify our priorities".

Peer review system has improved Rochdale's SEND provision ‘across the board'

In response to a critical SEND inspection in 2016, provision in Rochdale has improved across the board, according to an Ofsted report published last December.

One issue flagged was the capacity of mainstream schools to identify and meet need, and the local area has now introduced a peer review system in which schools review each other's SEND provision with an expert consultant. These settings are now considered to demonstrate strong improvement on pupil outcomes and a reduction in exclusions.

Bespoke training has increased the confidence of school leaders and staff, with referrals into autism spectrum disorder pathways demonstrating that schools have a detailed knowledge of pupils' needs. Schools report that Rochdale additional needs and educational psychology services offer bespoke support to schools to help them to better meet the needs of pupils. The local area has made sufficient progress to improve this previous area of weakness.

Local leaders have also been working to improve poor educational outcomes and reduce exclusions, assisted by the "effective use of high quality local authority data", as well as a panel which meets regularly to discuss exclusions. Schools can bid for additional funding to develop bespoke support to help avoid exclusions.

Waiting times for occupational therapy and child and adolescent mental health services have also improved through the use of locums.

Awareness of the local offer has also been boosted by, among other things, a competition for pupils to create a new logo.