DCS turnover: beneath the data

High turnover in children's services directors in the past year masks signs of increased stability.

The number of directors of children's services posts that changed hands in 2017/18 is the highest since the role was created 11 years ago.

Analysis by the Association of Directors of Children's Services (ADCS) found that from April 2017 to March 2018, there were 65 changes in DCS postholders, a third more than the 44 recorded in 2016/17.

The sharp rise has led the British Association of Social Workers (BASW) to question whether a "short term consultant culture" is emerging in children's services leadership.

"We need to learn why long-standing directors are leaving and/or moving on, and understand the impact of working within a context of diminishing financial resources, performance assessments, Ofsted judgments, diverse political environments and a broad range of day-to-day pressures," says Maris Stratulis, Basw England manager. 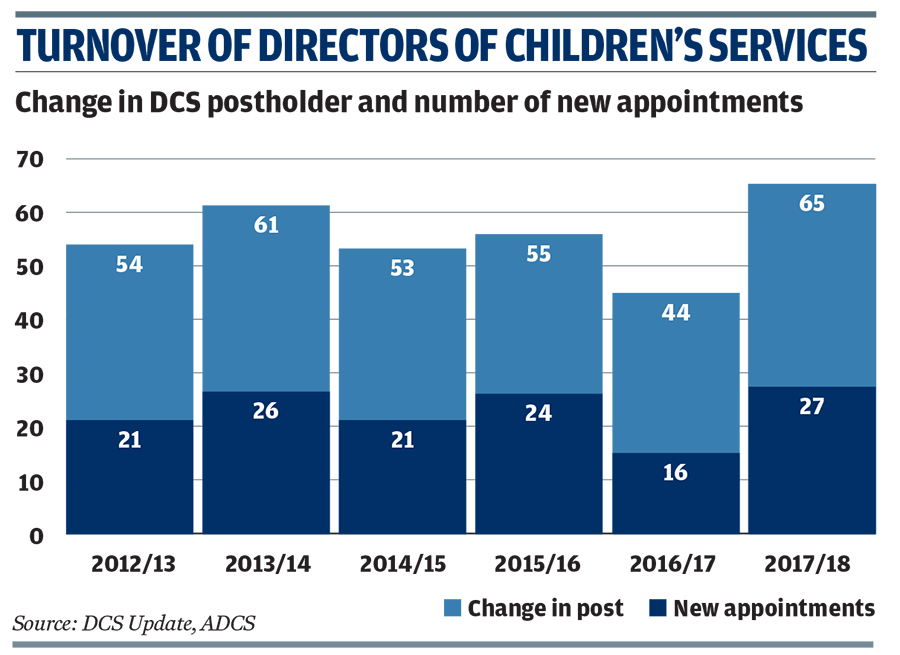 Factors behind the rise

The pace of DCS turnover has continued unabated since April, with a further six directors either changing post or announcing their intention to leave. However, Rachael Wardell, chair of the ADCS workforce development policy committee, warns against reading too much into the recent rise.

"Almost half of these changes took place due to interim arrangements pending a permanent appointment," explains Wardell, who herself left West Berkshire in mid-May to take up the post of DCS in Merton.

Contrary to suggestions of a loss of experienced leaders, Wardell says a "great deal of expertise remains". She points to the steady increase - from 32 months in 2012/13 to 37 months in 2017/18 - in the average tenure of a permanent DCS.

While evidence suggests DCSs are, on average, staying in post longer, the latest data shows the director post changed hands in half of councils in some regions. These were regions where a significant number of councils are struggling with performance as judged by Ofsted rating (see box).

Jo Davidson, principal at The Staff College, which runs children's services leadership programmes, says such high rates of DCS changes can make it hard for regional support networks to work effectively. However, she too urges caution over the reasons.

"I don't think we know enough about the turnover figures," she says. "Are we just assuming there is a correlation there or are other factors at play such as people reaching retirement age?"

Meanwhile, the 27 new DCS appointments in 2017/18 was also the highest recorded by the ADCS. The previous year saw just 16 new DCSs appointed, the lowest on record, prompting some sector leaders to raise concerns over the future supply of leaders.

Wardell says the "overwhelming majority" of new DCSs were assistant directors moving up the management chain.

"A large amount of succession from assistant director level ensures that leadership positions are held by experienced and knowledgeable individuals and their expertise is not lost from the sector," she adds.

Davidson says the figures show there is a "good supply" of professionals wanting to work in senior leadership.

"Succession planning is critical," she says. "People must feel it's the right job for them, and get the right support and development."

The past year has also seen the most significant fall since 2012 in so called "twin hat" directors - those who combine their DCS role with running adult services or other directorates. In 2017/18, there were 46 twin-hat directors, compared with 57 a year earlier and 61 at their peak in 2014/15.

Wardell says around two-thirds of local authorities have at some point since 2007 had a combined children and adult services directorate.

"Although more authorities have moved away from combined arrangements than have adopted them, there are still examples of new combined roles being established," she says.

"Most organisations are going through changes in structures, and the shape of leadership roles within them are pretty fluid," she says.

"Perhaps there are difficulties in finding one person who has expertise to expand the two roles," she adds.

"Potentially, with chief social workers for adults and children the ‘twin hat' role might not be considered the right structure to adopt."

The ADCS analysis shows that in the four regions where DCS turnover is 50 per cent or above, most councils are rated "inadequate" or "requires improvement" by Ofsted. The proportion of councils with the lowest two ratings in these regions are: