As well as the debilitating impact on the mother, PND is associated with a range of negative child outcomes, including impaired cognitive development, behavioural issues and insecure attachment. These issues have been shown to persist in to adolescence.

Given the impact on mother and child, and estimated related economic costs of £8.1bn per year in the UK, there is a strong imperative to act to tackle the effects of perinatal mental disorders.

Stein and colleagues' study explores the limitations of much of the research into treatment for PND and its impact on children. They point out that the impact of PND on child development is most pronounced when the depression persists beyond the first few months, but that most research relates to relatively brief forms of interventions in the early post-natal period, rather than more intensive and long-term therapies.

They tested whether a parenting intervention could improve children's, cognitive, language, behaviour and attachment outcomes by age two when provided alongside an intensive form of treatment for maternal depression in cognitive behavioural therapy (CBT). 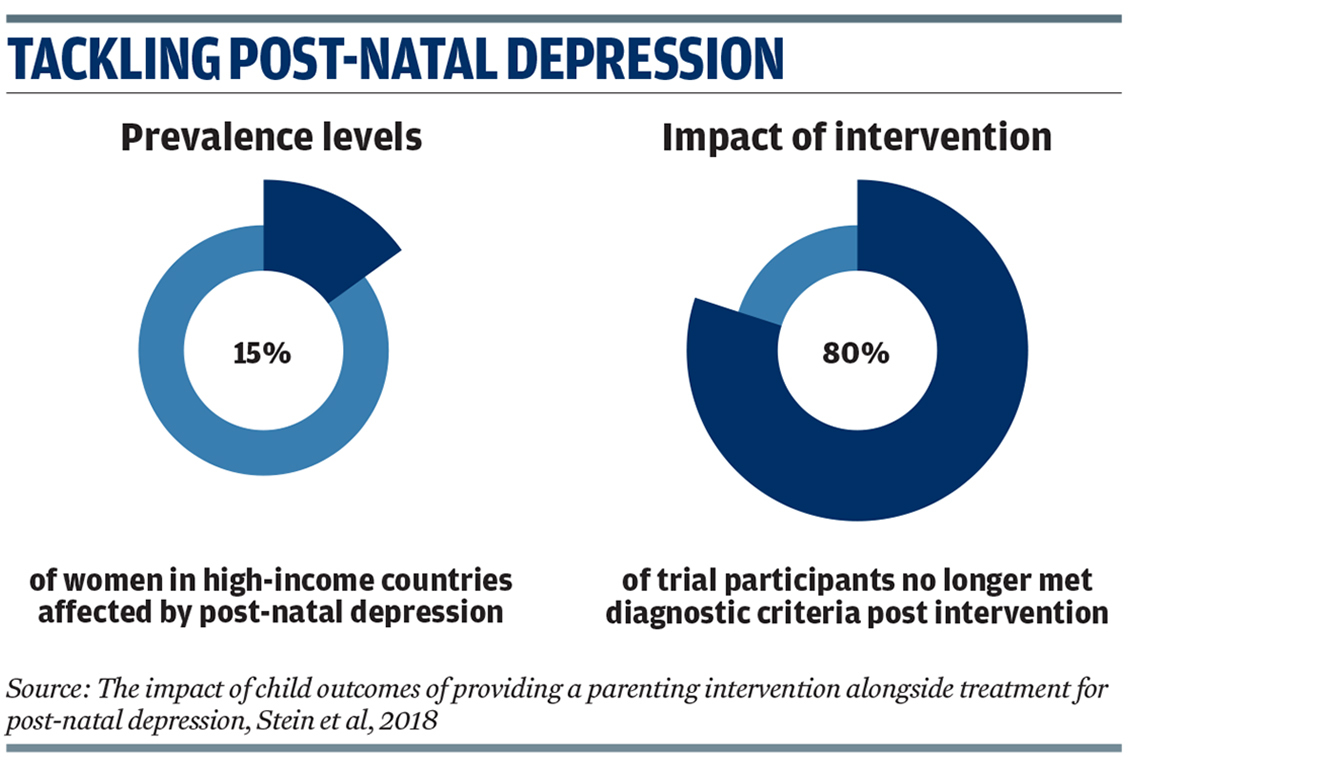 Parenting has long been established as a crucial link between maternal depression and child outcomes, with low levels of maternal contingent responsiveness impacting on children's cognitive development and poor support for emotional self-regulation linked to behavioural issues. So there is good reason to think that a parenting intervention such as video feedback therapy (VFT) - which been shown to be effective in a number of contexts - could lead to better developmental outcomes when provided alongside effective treatment for PND. VFT aims to improve the quality of the mother-child interaction by enhancing attention to infant cues, emotional scaffolding, and sensitivity to treating the child as an agent with attachment needs. To achieve this, therapists record interactions between parents and children in the home and discuss various aspects of that interaction at the next visit, with the aim of helping mothers to better understand infant communication signals and enhancing maternal responsiveness.

The researchers used a randomised control trial to compare this approach to one involving CBT delivered alongside progressive muscle relaxation (PMR), which is commonly used to treat stress but does not actively target parenting. The study involved 152 women living in the Oxford area who had a child aged between four and a half and nine months old and met the diagnostic criteria for a major depressive diagnosis which had persisted for at least three months. They received 11 intensive home visits from a clinical psychologist before the child's first birthday, with two booster sessions in the second year. Child outcomes were measured at aged two.

The study demonstrated very encouraging findings, with significant improvements in maternal depression such that at least 80 per cent of participants no longer met the diagnostic criteria, and child outcomes at age two were in the normal range for a non-clinical population. However, the researchers found no difference between the groups receiving VFT and those receiving PMR. In other words, both groups improved by a similar amount, and VFT did not show any additional benefit in terms of parent or child outcomes.