The Educational Aspirations and Psychological Wellbeing of Adopted Young People

Local authorities in England and Wales have a legal duty to report annually to central government on looked-after children's psychological wellbeing and academic attainment but this duty ends once children are adopted. Researchers from Cardiff University wanted to fill this gap in understanding of how young people adopted from the care system perform at school, looking at their wellbeing and aspirations around work and education.

The team analysed data from the UK Household Longitudinal Survey, also known as Understanding Society. The survey collects data from more than 30,000 households over a period of 24 months for each wave. The researchers took their data from questionnaires completed by 10- to 15-year-olds and their final sample for analysis consisted of a group of 22 adopted young people and a general population comparison group of 110 young people.

Questionnaires completed by the young people included the Strengths and Difficulties Questionnaire (SDQ), which rates emotional symptoms, conduct problems, hyperactivity/inattention, peer relationship problems and pro-social behaviour (behaviour that benefits others) on a scale of one to 10. The emotional and peer relationship sections were combined into one scale known as "internalising symptoms" and the conduct and hyperactivity scores were combined into another called "externalising symptoms", yielding a range of possible scores from 0 to 20. A total difficulties score was obtained by combining everything apart from pro-social scores, yielding scores that could range from 0 to 40. 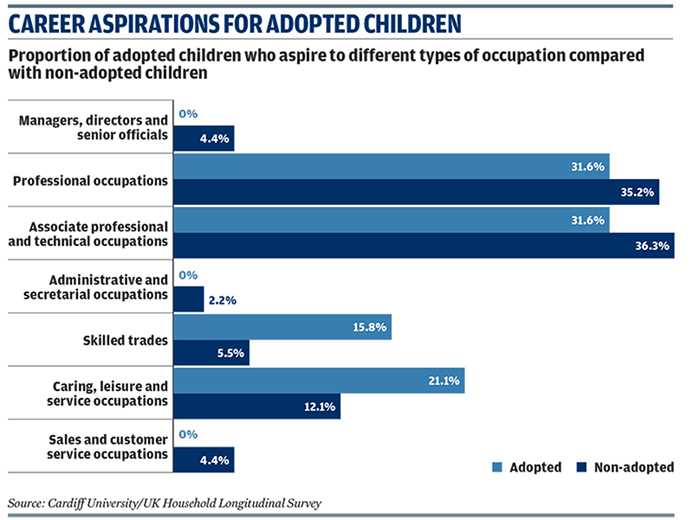 In contrast, adopted and non-adopted children scored similarly on the internalising symptoms scale. The researchers suggest the SDQ is not designed to pick up issues common in adopted children such as attachment-related difficulties, anxiety and dissociative responses to trauma, age-inappropriate sexual behaviour and self-harm.

Effective interventions aimed at supporting adopted children in the school environment should take into account the impact of early adversity, including trauma and loss, on psychological wellbeing, say the researchers. Children with adverse early experiences often don't respond to traditional behaviour management techniques. Rather than simply trying to manage behaviour, interventions need to address the issues behind that behaviour.

Top of the Class: How Should We Be Judging Our Schools? Adoption UK, January 2019