Researchers aimed to identify potentially preventable failings along the whole care pathway, with a particular focus on care during labour, delivery and any resuscitation

The percentage of babies in the UK who are stillborn or die at birth is high compared with other European and high-income countries, although rates have fallen by more than half in recent years - from 0.62 per 1,000 births to 0.28 per 1,000 births. This report focuses on normal babies of 2.5 kg or more who were stillborn or died within the first week of life, where the death was related to problems during labour, in England, Wales and Northern Ireland.

The researchers aimed to identify potentially preventable failings along the whole care pathway, with a particular focus on care during labour, delivery and any resuscitation. An initial sample of 104 out of a potential 225 cases was selected in June 2016, and 78 cases were chosen to be discussed at 10 multi-disciplinary confidential enquiry panels.

Since the last enquiry into term intrapartum deaths in 1993-1995 there has been an increase in the proportion of births to mothers more likely to be at increased risk of perinatal loss, such as older mothers, those born outside the UK, and those who are obese.

In some eight out of 10 cases - 78 per cent of stillbirth cases and 79 per cent of cases where the child died in the week following birth - the panels identified potential improvements in care that might have prevented the baby's death. Issues around inadequate resources and staffing levels were identified as a problem in just over a quarter - 21 - of the cases while issues that might be related to staffing or capacity were identified in a further seven cases.

In 17 of these cases the issues relating to lack of capacity occurred during labour, and in 10 cases the panel thought a lack of capacity played a role in the death of the child. Issues included delays in transferring the mother from an antenatal setting or a midwifery-led unit to the delivery suite either due to lack of a room or increased activity levels and a lack of staff.

There were also issues around screening in the antenatal period. In a quarter of cases, screening for fetal growth disorders was not performed according to national evidence-based guidance. Management did not follow national guidance in a third of cases where women attended with reduced fetal movements. Two thirds of women were not properly screened for smoking in pregnancy.

There were problems for a third of women who needed to be induced when it came to starting labour, including delays in starting or continuing induction and a lack of fetal monitoring during the induction process.

All of the cases required extensive resuscitation and the involvement of senior staff to assist. This was sometimes delayed because staff were working elsewhere in the hospital.

Although 74 of the 78 deaths were reviewed by the local hospital team, the quality of most reviews was poor and didn't follow national standards. The quality of bereavement care was assessed as good for nearly half of the parents, satisfactory for nearly a third, and either poor or with insufficient information in the notes in the remaining cases. 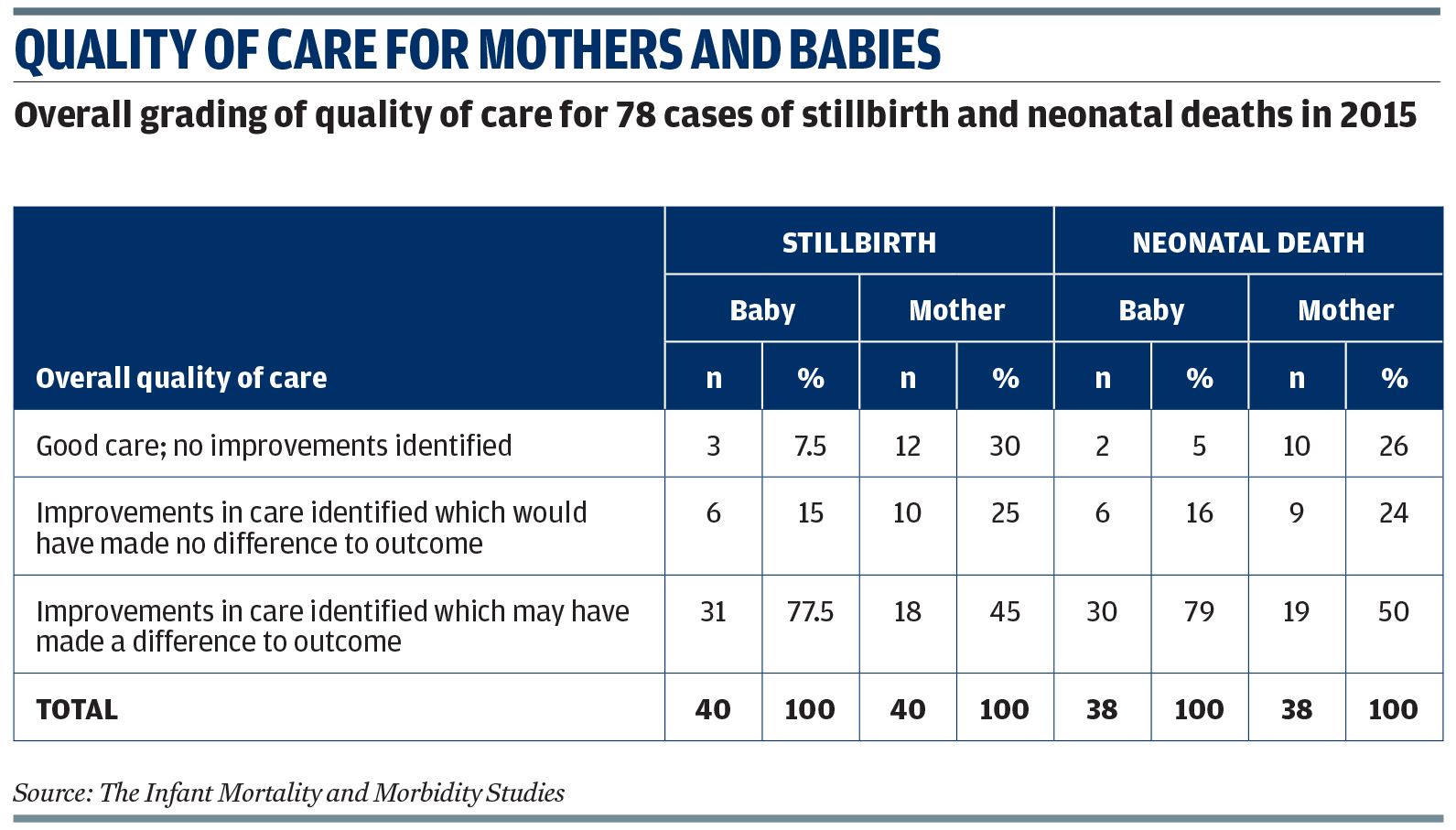 Staffing and capacity issues in maternity services, particularly around the induction of labour and timely transfer to delivery suite, need to be addressed, concludes the report. Staff need training in situational awareness - being able to assess a whole situation in context - when interpreting monitoring. There is a need for the development of a national, standardised risk assessment tool for determining a woman's risk status when admitted in labour, prior to induction, and during labour.

National quality improvement and training programmes need to be implemented to improve compliance with national guidance around processes such as monitoring growth in pregnancy and the management of reduced fetal movements.