Cordis Bright was commissioned by the government to review local authority support to non-EEA migrant children identified as potential victims of modern slavery, including trafficking.

In 2015, 747 children from non-European Economic Area (EEA) countries were referred to the National Referral Mechanism (NRM) in England and Wales as potential victims of modern slavery. Research and consultancy organisation Cordis Bright was commissioned by the government to review local authority support to non-EEA migrant children identified as potential victims of modern slavery, including trafficking.

The researchers found local authorities can experience challenges in identifying victims of modern slavery and may not refer all potential victims to the NRM despite a legal duty to do so. Some of the reasons suggested for this include a lack of awareness of the NRM, the duty to notify and the referral process, as well as a perception that a referral to the NRM does not lead to any improved outcomes for the child. 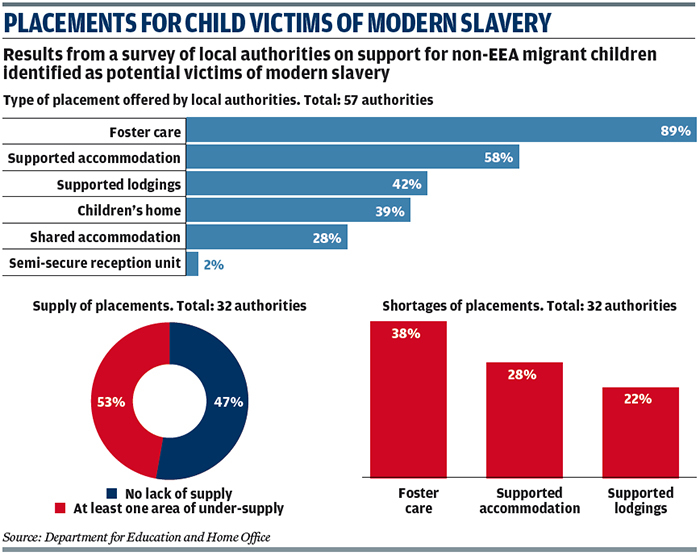 Older children and young people were more commonly identified as potential victims of modern slavery with 58 per cent aged 16 or 17. Boys and young men were more frequently identified as potential victims - 73 per cent. The most commonly-reported country of origin for children believed to be victims of modern slavery was Vietnam, followed by Albania. Afghanistan, Eritrea, Iran and Iraq were joint third.

Most authorities said they worked with few children thought to be victims of modern slavery and had limited understanding of what good practice should look like. Support was not usually designed specifically to meet this cohort's needs, but was selected on a case-by-case basis from the offer available to all vulnerable children in local authority care. A minority of local authorities, especially those based in South East England, did offer specialist services.

Foster care was identified by the majority of local authority and voluntary sector stakeholders as the most effective placement type for this cohort, particularly for children under 16. Of those who responded to a question on type of placements offered, 89 per cent said they provided foster placements to this group. More than half who talked about supply and demand said they had more than enough placements but 47 reported at least one area of under-supply with foster care being the most common type of placement in short supply.

Better information sharing between local authorities would help prevent children going missing, suggests the report. Interviewees also called for increased guidance and training on the identification, support and safeguarding of child victims of modern slavery, as well as national mechanisms for sharing good practice. Training for social workers was identified as particularly important. However, some interviewees said it would be beneficial to offer more training to professionals in other roles such as housing officers and staff in residential care homes.

Heading Back to Harm: A Study on Trafficked and Unaccompanied Children Going Missing from Care in the UK, Andrea Simon, Chloe Setter and Lucy Holmes, ECPAT UK and Missing People, November 2016. Findings from a year-long study.

Still at Risk: A Review of Support for Trafficked Children, Anita Franklin and Lisa Doyle, Refugee Council and The Children's Society, September 2013. Findings from a short Home Office-funded scoping review of the practical care and safeguarding arrangements for trafficked children.

Challenges to the Rapid Identification of Children Who Have Been Trafficked for Commercial Sexual Exploitation, Yvonne Rafferty, Child Abuse & Neglect, February 2016. This article focuses on procedures to identify trafficked children.