Academics from the universities of Coventry, Sheffield, Huddersfield, Cardiff, Edinburgh, Stirling and Queen's University Belfast received Nuffield Foundation funding to study inequalities in the proportions of looked-after children, or those subject to child protection plans, in the four UK nations.

Link to briefing paper one

Academics from the universities of Coventry, Sheffield, Huddersfield, Cardiff, Edinburgh, Stirling and Queen's University Belfast received Nuffield Foundation funding to study inequalities in the proportions of looked-after children, or those subject to child protection plans, in the four UK nations.

The project involved 24,000 looked-after children and 12,000 subject to child protection plans, representing 10 per cent of all such children across the UK in March 2015, when the study began. The children were living in 55 different local authority or health and social care trust areas. 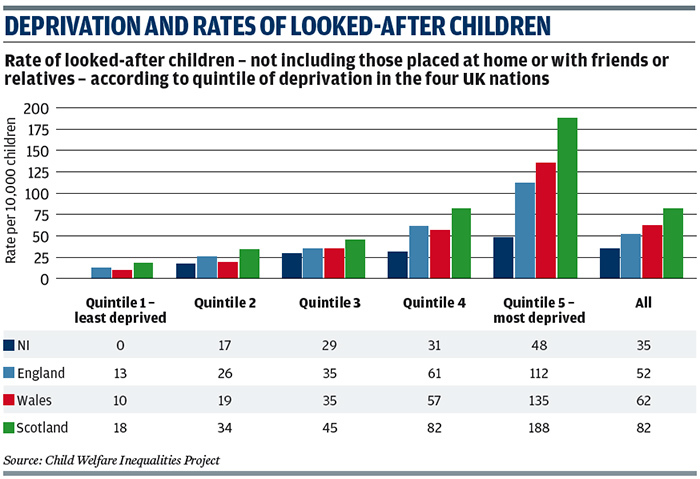 Within each country, researchers found a very strong association between the level of deprivation and the proportion of children who were in care or subject to child protection plans. Children in the most deprived 10 per cent of neighbourhoods in the UK are at least 10 times more likely to be in care than children in the least deprived 10 per cent. Across the UK, each step increase in deprivation increases a child's chances of being in care by about a third.

Researchers also found inequalities between different ethnic groups in England. Overall, children of mixed heritage were most likely to be looked-after and those from Asian backgrounds least likely. In the poorest neighbourhoods, where children in minority ethnic categories are more likely to live, looked-after children rates were highest among White and mixed heritage children.

The report authors say a review of the relationship between demand and the distribution of expenditure between and within local authorities is overdue, especially given imminent changes in local government finance. Inspection processes should look at how children's services are working to minimise inequalities in demand for services and outcomes for children. Meanwhile, supporting families to survive and thrive should be a higher priority for children's services and inform education and training, and be embedded in processes such as assessment, case reviews and managerial oversight. Better data systems that include information about parents and their circumstances are urgently required to flag up inequalities in the demand for and supply of services and the consequences for children.

Exploring Demand and Provision in English Child Protection Services, Rick Hood and others, British Journal of Social Work, May 2016. A study into how statutory agencies respond to fluctuations in demand