The provision of self-harm prevention and intervention in secondary schools in Wales and South West England, and future needs.

When schools were asked to rank the usefulness of different interventions, a quarter of all schools said counsellors were the most useful way to address student self-harm. This was followed by child and adolescent mental health services (14 per cent) and teacher training (12 per cent).

The researchers asked schools about the prevalence of self-harm in their setting, with a national average of about 10 per cent of the student population engaging in self harm. Cutting was found to be the most prevalent self-harming behaviour, with 22 per cent of respondents stating prevalence was very high or high, and 49 per cent stating prevalence was average. Poisoning, burning, excessive exercise and hair pulling were all found to have a low or very low prevalence.

Schools were asked what was preventing them from tackling self-harm. A lack of time and resources was a major barrier with 47 per cent stating there was inadequate time in the curriculum. Meanwhile, 38 per cent said there was a lack of available resources and 36 per cent reported a lack of time to deliver activities. Inadequate training for school staff was also frequently cited as a major barrier with only 19 per cent indicating it was not a barrier to prevention or intervention.

School staff were concerned raising awareness of self-harm among students may actually lead to an increase in self-harm. This fear was cited as a major barrier by 36 per cent of respondents and a minor barrier by 44 per cent. Only 20 per cent thought it was not a barrier. The majority of respondents said they would rather use general mental health promotion programmes than ones specifically on self-harm.

It is vital to overcome barriers to self-harm prevention work in schools as previous studies suggest schools can play a key role, say the report authors. National guidelines or policy on self-harm and suicide prevention for schools would help ensure consistency and improve staff knowledge.

Including topics such as self-harm in the curriculum could also help. Schools report lack of time to train staff on self-harm. One solution could be to include training on self-harm in mandatory safeguarding training. 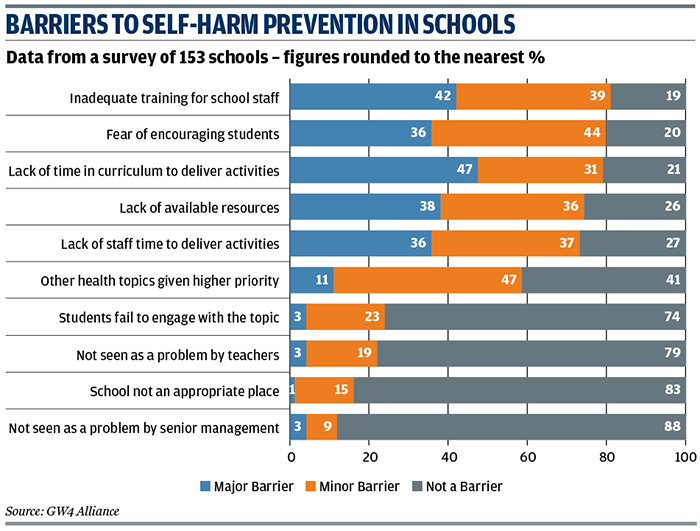