Researchers at the Connect Centre at the University of Central Lancashire decided to investigate children's involvement in domestic homicides.

Domestic homicides are defined as the death of people aged 16 or older that have, or appear to have, resulted from violence, abuse or neglect by a relative, someone they are in an intimate relationship with or a member of the same household.

Where demographic information was given the researchers found the ages of the children ranged from 11 months to 17 years and 56 per cent were male. While 52 children were the children of both the homicide victim and the perpetrator, 36 were the victim's children from previous relationships and 37 were the perpetrator's children from previous relationships. The vast majority - 93 per cent - of the 55 DHRs involved a male perpetrator with 82 per cent involving the victim's current or former partner.

The researchers found the DHRs studied rarely addressed the impact of the homicide on children. Eleven DHRs mentioned children were now receiving support that was provided or accessed via schools, children's social care or victim support services. Three reports identified a need for trauma-focused support and one DHR flagged up the need for longer-term support.

Poor record-keeping was highlighted as an issue in a number of DHRs and shortcomings in relation to risk assessment were also an issue. Only seven victims in the 55 DHRs had been referred to a MARAC (multi-agency risk assessment conference). DHRs also identified missed opportunities to provide services following identification of need, including failure to refer families to children's social care and a lack of support for children experiencing domestic violence and abuse (DVA).

A failure to listen to children was emphasised in six DHRs. 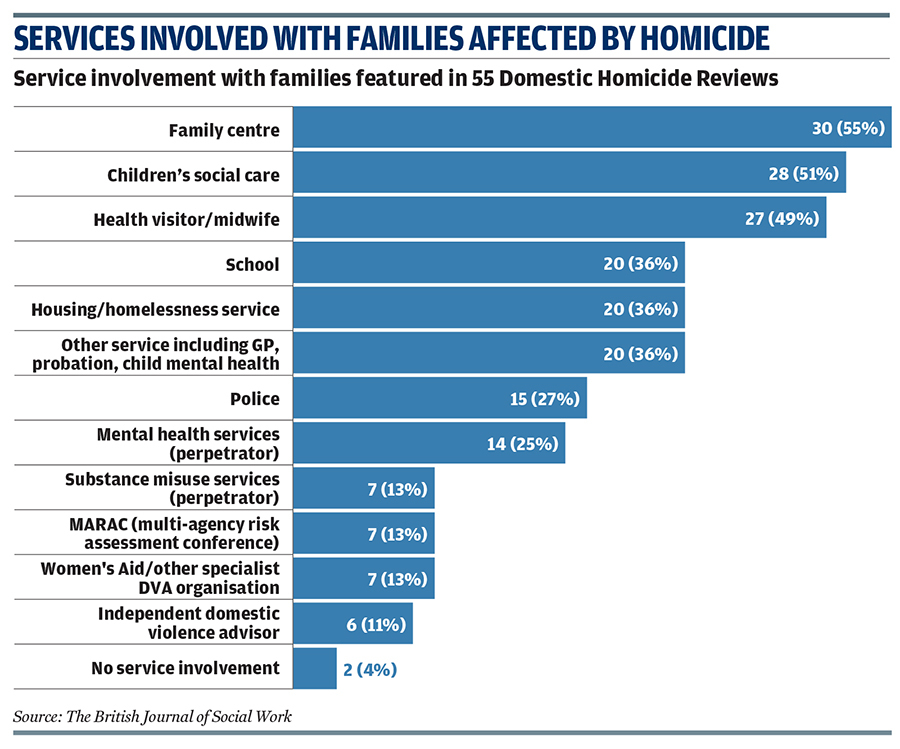 DHRs should record what support is offered to children and this approach might ensure more children get the help they need, say the researchers. DHRs need to be easily available to inform future interventions with children and carers. For example, attaching the homicide report to the children's social care case files would be good practice.

Children need to be more involved in the review process, the researchers conclude. DHR chairs may require more guidance as to how to best inform and include children and young people. Agencies working with families need better training in DVA and more collaboration with the specialist DVA sector.