This study set out to discover the factors behind children receiving multiple referrals to local authority children's services. The analysis focused on 498,867 children referred during the financial year 2010/11.

The study found nearly 15 per cent of children referred to children's services during that time were re-referred in the same year. By 2011/12 some 30 per cent had been re-referred and the proportion reached 50 per cent by 2015/16, implying that within six years half of all the children referred to children's services returned at least once. The re-referral rate varied widely across local authorities.

The most common reason for children to be initially referred to children's services was abuse and neglect (40 per cent) followed by family dysfunction (18.7 per cent) and family in acute distress (10.4 per cent). The closer re-referral took place in relation to the original referral, the more likely the reason for re-referral was the same. This was the case for 70 per cent of children re-referred within a year. This falls to around half of re-referred children in 2012/13 and stays at around that proportion for those re-referred later.

A child's age was an important factor when it came to re-referral: the older the child the less likely they were to be re-referred.

The research found the likelihood of children returning to the social care system increased rapidly for children living in local authorities with more than 10 children in need per social worker. The report suggests that if local authorities lack capacity to deal with referral cases, more children will return for a repeated referral, as their needs might have not been assessed or addressed adequately. 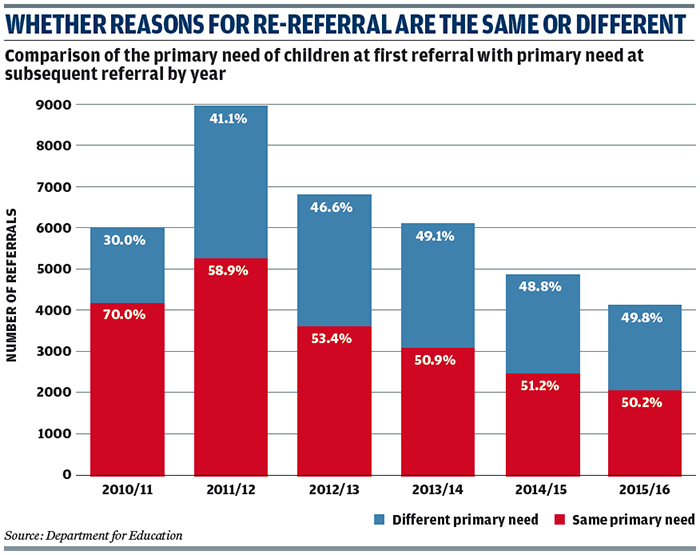 Re-referrals can be costly to local authorities but can also be stressful and harmful to the children as well as parents or guardians. Multiple referrals can be detrimental to children's development. Identifying groups of children with increased risk of re-referral is useful for defining guidelines for closer inspection of such cases at first and subsequent referrals, say the researchers. Identifying local authorities with more or less than the expected likelihood of re-referral can help determine best practice as well as investigate ineffective services.

Referrals and Child Protection in England: One in Five Children Referred to Children's Services and One in Nineteen Investigated Before the Age of Five, Andy Bilson and Katie Martin, The British Journal of Social Work, May 2016. This paper shows 22.5 per cent of children born in 2009/10 were referred to social care before their fifth birthday.