A five-year study of 58 academy chains by the Sutton Trust found attainment of disadvantaged pupils in 38 of them were below the national average, including eight that were significantly below average.

In just one in five of the chains analysed, pupils eligible for free school meals or those in local authority care were above average for Key Stage 4 results.

The report warns that academy chains are failing in their aim to improve educational achievement, and calls on the government and regional school commissioners to improve sharing of good practice between academies.

Academies were first set up in areas of social deprivation in 2002 with the intention of improving outcome for underperforming children with the help of a sponsor.

There are now more than 7,500 academies in England, representing more than a third of all schools. 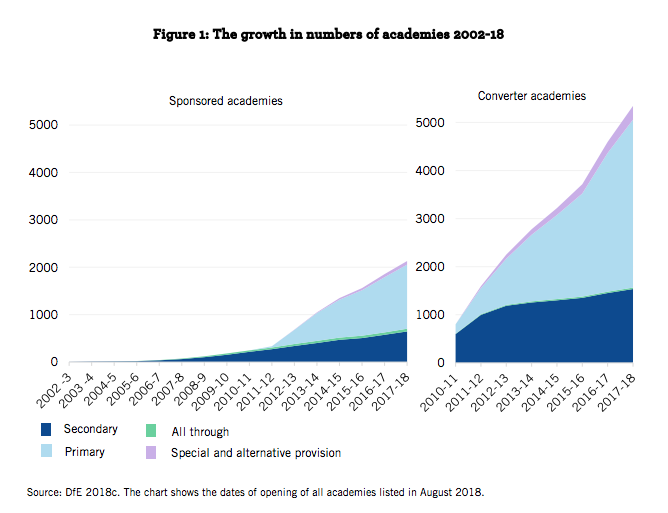 The report showed year on year, there had been limited change in the overall rankings of the chains in the study.

It states: "The same small group of chains consistently outperform the national average for disadvantaged pupils, while another small group of chains remain at the bottom of the table each year, and there is little to suggest that the regional schools commissioners are having any success in bringing about improvement in these chains."

The researchers also voiced concern that some chains were entering high numbers of pupils to the EBacc qualification.

While the government aims for schools to raise EBacc entry rates to provide a more academic curriculum, the researchers argue the qualification may not be suitable for children with low prior attainment.

The research states: "The number of academic subjects in EBacc may stretch some pupils' efforts too widely and result in very low grades.

"It has been argued that it is inappropriate to enter pupils into exams which they are likely to fail to achieve grades that are of any value for their future education or employment."

Sutton Trust founder Peter Lampl said since improving educational achievement was the original reason academies were set up, in this regard they had "not succeeded".

"We at the Sutton Trust are recommending the sharing of good practice of the best academy chains with the rest," he said.

"More generally, schools should make increased use of the body of what works evidence.

"Also, there should be strenuous efforts in struggling schools to attract and retain good teachers and those teachers in subjects where there are shortages."

His call was backed by report author and director of the UCL-Institute of Education Becky Francis.

"We continue to find it perplexing that the government has done so little to explore the methods of successful chains and to distil learning to support others," she said.

"We continue to call for this, and for the government to capitalise on the successes of a range of schooling organisations, whether multi-academy trusts or local authorities, in order to do the best we can for all pupils."

"The haphazard efforts by successive governments to build some sort of structure to support academies has resulted in the entirely ineffectual but bloated bureaucracy of the RSCs," she continued.

"This report concludes that there is little evidence they are having any success in bringing about improvement, and yet their budgets increase year on year, with over £30m spent on their staffing last year.

"The government should reflect on what impact their dysfunctional system is having on children, parents and schools staff across the country. Now is the time to admit failure and move on."

The report states it is not possible to compare with accuracy how attainment levels have changed over time, because of changes in key performance indicators.

Disadvantaged pupils in England consistently achieve less than more affluent peers at Key Stage 4 in English and maths, the attainment gap being around 26 percentage points, according to the Department for Education.

However, earlier this month DfE figures showed that the attainment gap at Key Stage 2 has narrowed to 19 percentage points.