Costs to childcare providers have risen sharply over the last three years, a government-funded study suggests.

The Early Years Providers Cost Study was commissioned to help understand how "recent policy changes and other drivers of cost have affected the delivery of early years education and childcare".

The costs increase - 13 per cent across all types of provider - cannot be accounted for by reference alone to inflation, minimum wage and pension costs, which increased by 10 per cent over the same period.

In May last year, independent research by Ceeda warned that providers faced a funding shortfall of more than £500m.

Following its introduction of a national funding formula for the 30 hours entitlement for three- and four-year-olds in 2017, the government froze or cut the rate for 84 per cent of local authorities in 2018/19.

In the recent government cost study, independent consultancy Frontier Economics surveyed 120 early years providers between March and July last year and compared data to that collected in the 2015 DfE Study of Early Education and Development (SEED). 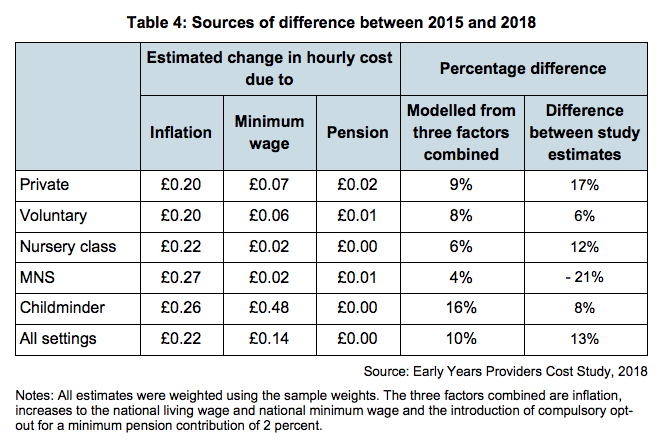 The report has inspired criticism from the sector because of the small sample size, with the DfE's executive summary admitting "large margins of error around the precise cost and income estimates".

It adds: "However, the robustness of the findings are supported by the random sampling of settings; the rigorous data collection approach; and the use of weighted statistics and regression analysis to present findings which are as nationally representative as possible."

Nonetheless, the National Day Nurseries Association chief executive Purnima Tanuku suggested the small sample size did not reflect a serious enough approach to what has been described as a funding crisis.

"It is about time that the government takes a serious and robust look at all the costs involved in delivering the policies they promised to parents," said Tanuku.

"Ministers at the DfE and the Treasury cannot rely on the data from 24 private providers to make these types of decisions when there are over 24,000 nurseries and pre-schools across England.

"These figures on childcare costs within the sector make a mockery of the true cost of delivering high-quality early education and childcare.

"Only running costs have been considered, ruling out the importance of investing in staff and the environment where children learn, grow and develop."

"These findings - taken as snapshot of a small proportion of providers in the busiest term - are just the latest in a long list of studies which show the level of crisis in the early years," he said.

"The government knows this but continues to find ways to defy mathematics rather than increase funding."

"The research reveals that childminders have an hourly delivery cost nearly as high as that of maintained nursery schools due to their statutory ratios," she said.

"However, they have not received any additional funding to reflect this reality. Low funding rates, delayed payments and the inability to deliver funded hours to related children are all leading to more and more childminders leaving the profession."

Both Tanuku and Bayram urged the government to pledge more money to the sector in its next speading review.

A DfE spokesman said the department would consider several pieces of research on various aspects of the provider market when making decisions ahead of the review.

"Next year we will be spending a record amount on childcare support - around £6bn a year, including funding for our free early education offers on which we will spend around £3.5bn this year alone," he said.

"More than 700,000 of the most disadvantaged two-year-olds have benefited from 15 hours' free childcare since 2013, and more than 340,000 three- and four-year-olds benefitted from our 30 hours offer in its first year, meaning parents are spending less on childcare or are able to work more flexibly.

"Under our fairer funding formula, introduced in 2017, the total national average rate we pay to councils for three- and four-year-olds increased to nearly £5 per hour - significantly more than what this report tells us is the average hourly cost to providers."

Last week, the DfE awarded an extra £24m in stop-gap funding to maintained nursery schools. This is for the 2019 summer term, ahead of the spending review in the autumn.