The chief medical officer has called for tougher action on childhood obesity - such as banning eating and drinking on public transport.

The recommendations come as separate NHS Digital statistics released today that show obesity among reception-aged schoolchildren in England increased by 58,000 children between 2017/18 and 2018/19.

The chief medical officer for England's special report Time to Solve Childhood Obesity claims that the government is "nowhere near" achieving its ambition of halving rates by 2030.

More therefore needs to be done to reduce obesity and associated health risks, in particular among young people in disadvantaged areas and some minority ethnic groups, says the report.

Tough measures should include a ban on eating and drinking on public transport to reduce snacking by children.

In addition, there should be a calorie cap in food and drink sold by cafes, delivery services, takeaways and restaurants.

Healthy foods should be exempt from VAT, also marketing, sponsorship and advertising of unhealthy food and drinks at all major public venues should be phased out, states the report. 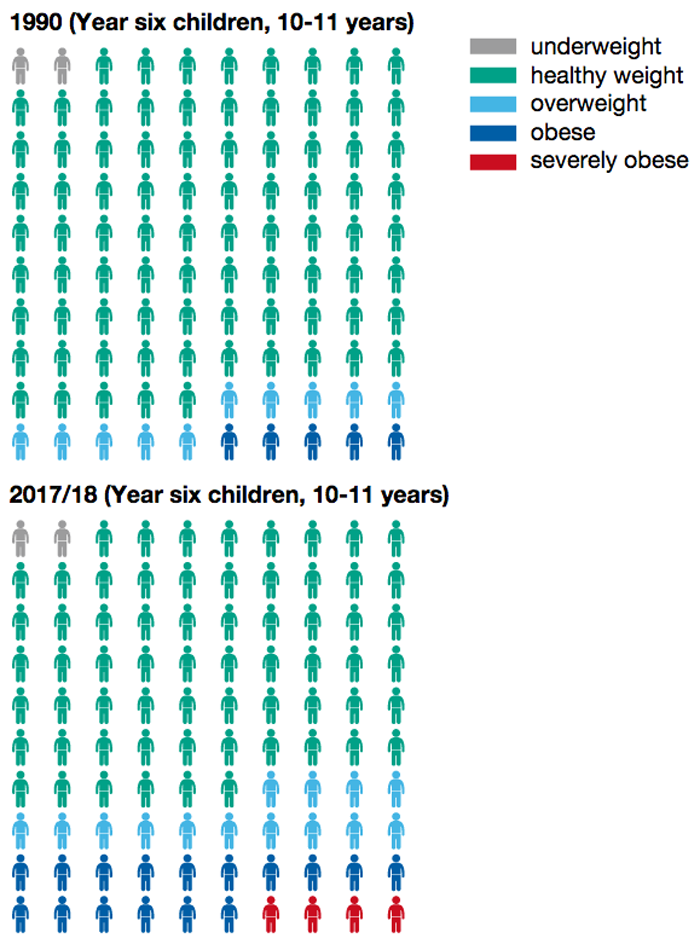 This is the final independent report by Professor Dame Sally Davies in her role as the government's chief medical officer (CMO).

It has been published after she left the role recently to become the UK's special envoy on antimicrobial resistance, and has been replaced by Professor Chris Whitty, a physician and epidemiologist.

This is my first morning as Chief Medical Officer after taking over from the outstanding Professor Dame Sally Davies.

She was a superb CMO.

I look forward to meeting the opportunities and challenges ahead with colleagues across public health, NHS and the wider health community pic.twitter.com/ctw5yELapL

According to government figures, six children out of each primary school of 30 are obese and a further four are overweight, twice as many as 30 years ago.

By 2030 as many as one in three children in the most deprived areas will be obese by 2030, warns Davies' report.

Ongoing health problems due to obesity can include type 2 diabetes, asthma, musculoskeletal pain and mental health issues such as depression.

Existing measures such as promoting physical exercise are not enough, according to her report.

"This report is aimed at politicians and policy makers, now and in the future," it states.

"The government ambition is to halve childhood obesity by 2030 - in England, we are nowhere near achieving this."

"Today's children are drowning in a flood of unhealthy food and drink options, compounded by insufficient opportunities for being active. But running, cycling, swimming and other physical activities, though important, will not solve obesity."

Her report does praise some government measures such as the soft drinks industry levy, which she says has helped fund school sport and breakfast clubs. The levy has been of benefit to children in deprived areas the most by cutting down on their high rates of tooth decay, her report adds.

Davies said: "The unavoidable fact is that over time our environment has become very unhealthy without us realising. Our children are impacted as a result and are now suffering from painful, potentially life-limiting diseases. I refuse to believe that any adult - parent or otherwise - could argue this is acceptable.

"We need to rebalance our environment - our politicians need to be bold and help everyone embrace healthier life choices. No child should suffer from complications caused by an avoidable case of type 2 diabetes, yet this is our new normal.

"We can fix childhood obesity but we need the right level of commitment to make the healthier choice the easy one."

Davies' report is also critical of schools and nurseries for not doing more to promote healthy eating.

"While some nurseries and schools create a healthy environment, others struggle to create the opportunities for children to eat a healthy meal."

She said: "As the UK is facing the biggest public health crisis of recent times and our children are getting fatter, Professor Dame Sally Davies is absolutely right by saying schools and nurseries need to play a central role in helping fight childhood obesity and get children healthier and more active.

"It's unacceptable that some nurseries are inadvertently adding to the problem by serving meals dangerously high in fat, salt and sugar - and we therefore need a radical wake up."

Health Secretary Matt Hancock said: "Professor Dame Sally Davies has done more than anyone to promote the health of the nation over a decade as CMO. Her parting report is no different and we will study it closely and act on the evidence."

In June, five councils were awarded £1.5m by the government to put in place projects to tackle childhood obesity. This included work by Blackburn with Darwen Council to incentivise local restaurants and takeaways to offer healthier options.

Meanwhile in Bradford the council is working with local mosques to combat high risk of obesity among South Asian children.