Troubled Families programme: its impact and what should replace it

An evaluation of the government's Troubled Families programme suggests it has helped cut care rates by a third as councils invested millions in early help. With the scheme due to end, leaders say the funding must continue.

A quarter of councils are planning cuts in children's services in 2019/20 in response to continued public sector austerity and rising demand, according to the Local Government Information Unit.

Many of these cuts will be in non-statutory services including early help. Children's services leaders fear the parlous funding situation will be exacerbated if money from the Troubled Families programme is also lost.

The programme - a flagship coalition government initiative launched in April 2012 - is due to end in March 2020. It has seen £920m invested in children's services in England over its lifetime, helping 400,000 families classed as having multiple interrelated social challenges.

The looming funding "cliff edge" has raised alarm among councils - 88 per cent of authorities surveyed by the Association of Directors Children's Services (ADCS) said that losing the cash would have a devastating impact, with three-quarters stating that nearly all early help services would be cut or significantly reduced. The ADCS warns that this could lead to increases in children's social care interventions.

If borne out, such a result would threaten a key achievement highlighted in the recent evaluation of phase two (2015-2020) of the Troubled Families programme published by the Ministry of Housing, Communities and Local Government (MHCLG) - namely, that the scheme has reduced the number of children in care by one third.

In the 2018/19 programme annual report, Communities Secretary James Brokenshire also acknowledges that while the work has produced results, it is relatively early days in terms of building on and retaining its impact.

He says: "The programme by no means represents the last word for these families in terms of how the state supports them, but for many it has been a step towards greater control and responsibility in their own lives."

Whether this will translate into continued funding in the government's forthcoming comprehensive spending review remains to be seen.

The three key aims of the current programme are to improve outcomes for families, transform local services and provide savings for the taxpayer. It could transpire that the government regards improvements across these three areas as justification for the targeted funding ending. 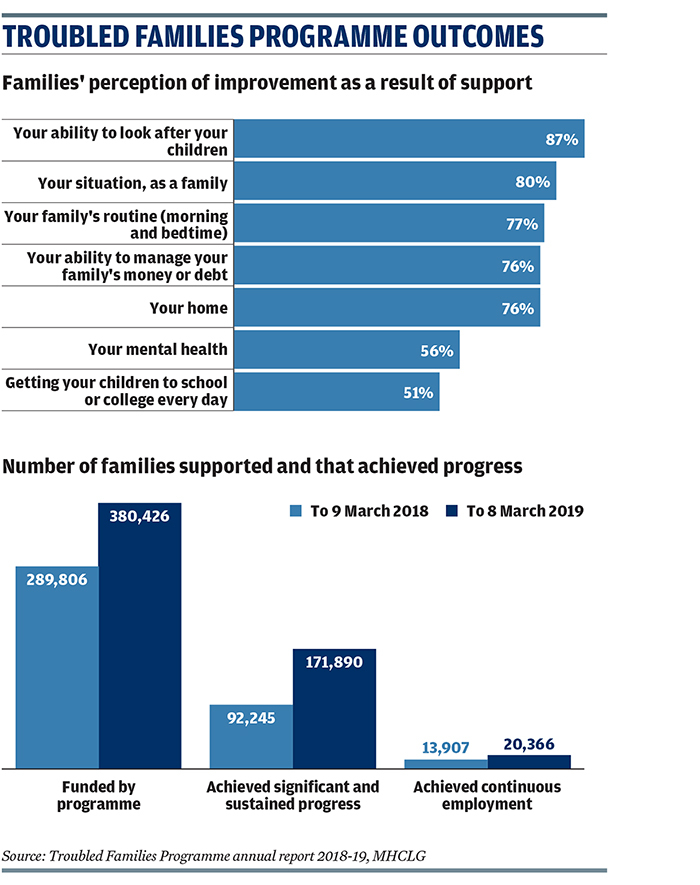 Service providers say they know the programme is having an impact, but the narrative around the evidence has a chequered history.

In 2016, the parliamentary public accounts committee found that some government claims around the programme's initial success were misleading, namely that it had "turned around" 105,000 of the nation's most troubled families - 90 per cent of the 120,000 targeted in phase one.

The 2015 MHCLG evaluation also made questionable claims of £1.2bn savings without taking into account the investment of £448m over three years, said the committee.

The committee flagged up the apparent suppression by ministers of negative findings from an official study by the National Institute of Economic and Social Research, which found that the scheme had "no significant impact".

Critics including Keith Davies, associate professor of social work at Kingston University, also raised doubts at the time over whether the initial impact would be sustained long term and highlighted other elements of political spin - for example, councils could claim payment by results if "at least one adult has moved off out-of-work benefits into continuous employment in the last six months".

While Davies, who edited Social Work with Troubled Families: A Critical Introduction, accepted that employment is an effective measure, he also argued that the whole-family transformation implied by the description "turned around" was questionable and suggested that "helped" would be more accurate.

By contrast, the latest MHCLG evaluation describes the evidence as "encouraging" in particular areas, less so in others, and acknowledges the limitations of the data.

Davies welcomes the "striking sea change in tone and terminology since the strident reporting of phase one of the initiative".

Tom McBride, director of evidence at the Early Intervention Foundation and a member of the government's Troubled Families programme advisory group, also praises "the sophisticated data infrastructure" of the scheme, which he regards as one of the strongest examples of government joining up multiple sets of data to evaluate a programme.

Regarding the evaluation itself, McBride says that there is a "good level of assurance that the impacts are real".

In his view, the positive results are supported by the fact that the measures selected are tough to achieve (see below). It is to the government's credit that it "kept the bar high" by continuing to use such measures despite a first evaluation delivering mixed results, he adds.

"It's possible that lots of other benefits are happening through the programme that aren't being captured," he says, such as a more stable family life.

"Softer" outcomes, such as better school attendance or reduced problem debt and rent arrears, are not being measured, but might also be meaningful indicators of intermediate impacts and improved family function, he explains.

A key feature of the programme is that while it requires councils to help specific families, they have the freedom to decide how to spend the money - which has a core element to fund a co-ordinator role, and a reward element for councils that achieve specific outcome targets.

One council that has aired its concerns about losing the funding is Milton Keynes, which receives £823,000 annually through the programme.

The lion's share of the money is spent on children and families practices, a team of 17 staff working outside of social care and who have a range of skills in early help for families. They have links with partners across sectors including youth services, education and health settings, housing and voluntary groups.

Bracey says: "The number of children in care here is pretty stable - we think there's a direct link with this investment, so it really matters to us. We're very worried about what will happen to the funding at the end of this financial year.

"This is not the time to ask us to take another £800,000 out of children's services spending.

"I don't know where I'd find £800,000 - perhaps other children's services that aren't statutory or other things in the council. You're choosing [to cut] between things that have good evidence of impact."

Donna Hall, who until February was chief executive of Wigan Council, believes that the true impact of the programme is in creating a "mindset shift", rather than covering a black hole in children's services budgets. Should the funding end, councils should not despair, says Hall, as there are ways to innovate and cut costs while improving how services work.

For example, Wigan discovered that up to £500,000 was being spent each year on a handful of the most challenging families, which it felt was inefficient.

The council investigated and made changes to create services that wrap around families rather than intervene separately in silos.

"We mapped out the interventions which were numerous," says Hall, who is also chair of think-tank New Local Government Network. "Everyone was looking at it through their own lens."

In Wigan, the programme helps to fund a team of key workers, who are employed specifically for their ability to "break down distance" between the authority and families, to understand their specific needs, and connect across services.

On the future for Troubled families funding, Hall says: "This money, though welcome, is not the be-all and end-all. Unless we use it to unlock a different paradigm, it's going to be just another interesting experiment. It's got to be a whole shift in thinking and working."

However, an unnamed DCS quoted in the ADCS survey offers a cautionary note.

"Transformation is about integration and new ways of working," the DCS says.

"But it needs people to drive integration and if the money is not there, it is in danger of stopping - we have to have the people to integrate and collaborate together to deliver services.

Stuart Gallimore, ADCS immediate past president, says there is evidence that the programme is making a positive difference in the lives of children and families.

He says: "We await assurances from the government about its future. Moreover, we urgently need a sustainable long-term funding settlement for our children's services to ensure the conditions are in place for children, families and communities to thrive."

Brokenshire suggests that in the future, the programme could be rebranded to something less pejorative, and include a focus on knife crime.

David Holmes, chief executive of charity Family Action, which has worked with families under the programme, believes that it is "vital to keep a holistic focus" on the family.

"This means working with all members of the family and supporting them to work through all their issues - for us, that is what has made the programme successful," says Holmes.

"It is fine to have a focus on particular issues, as long as the existing criteria remain and there is enough flexibility for local authorities to choose the most appropriate issues for inclusion in their local areas, as the existing programme has done."

After two years in the programme: