EIF blueprint for the future of early help recommends better co-ordination of support for vulnerable families including long-term funding, a cross-government taskforce and commitment to evidence-based practice.

A report by the Early Intervention Foundation (EIF) puts forward a long-term plan to reimagine prevention work with children and families so that early intervention becomes an established service across all local and national government.

Realising the Potential of Early Intervention sets out a series of measures to build the evidence base for effective early intervention programmes, redesign the family support system around early intervention approaches, and create a cross-government taskforce to co-ordinate policy and spending decisions across Whitehall.

It comes at a time of dire warnings from children's services leaders about imminent closures and reductions to early help services following deep cuts to budgets and rising demand for crisis intervention services.

The report identifies funding pressures as one of the key challenges to delivering the potential of early intervention. It cites research by Action for Children, the National Children's Bureau and The Children's Society that shows the early intervention allocation from the government to local authorities will reduce 72 per cent between 2010 and 2020. Meanwhile, 2016 research by EIF shows £17bn is spent on late interventions (see graphic). 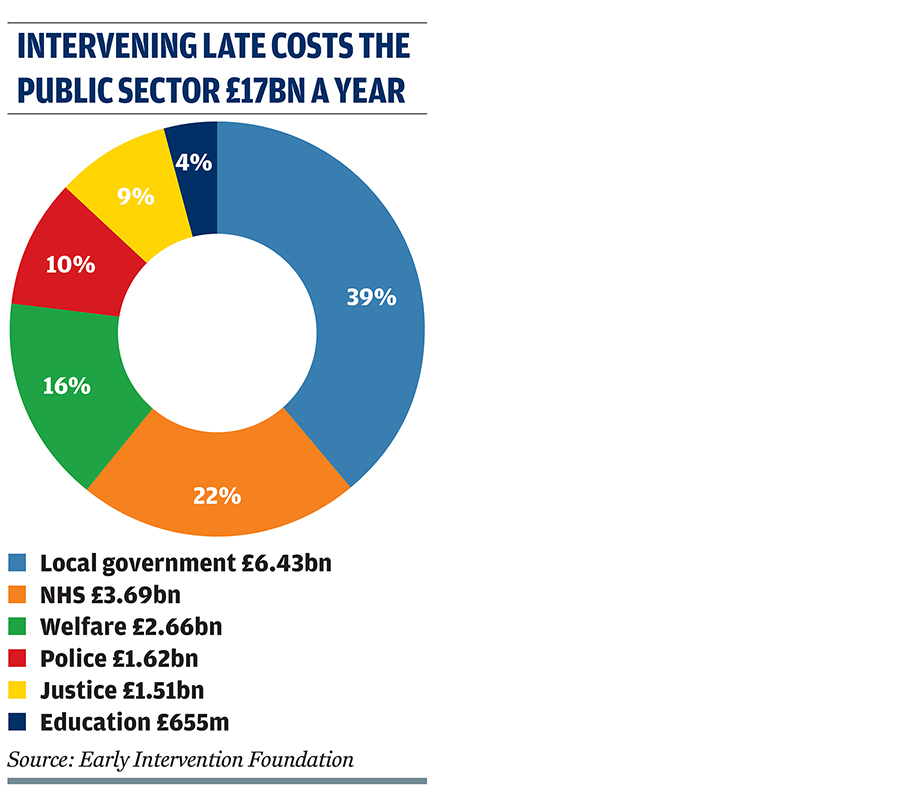 Short-term political cycles - in local and national government - make it hard for policymakers to invest in long-term programmes. "The reality is that these [short term] approaches are unlikely to deliver sustainable improvement or to make the best use of available resources," it states.

The silo nature of government policy and funding streams mean it is difficult to get backing for an early help programme when "the decision to invest will often rest in the hands of a single agency or council department that, because the benefits of early intervention tend to be long-term and widely shared, may not themselves benefit from the investment".

Small, short-term funding pots from the government that address single issues are particularly unhelpful, EIF says, because they "absorb significant local resources in the process of developing bids and setting up new services which may then need to be withdrawn when the funding ends".

Another barrier highlighted is how policy responsibility for children's issues is dispersed across a number of government departments. While EIF acknowledges this is "arguably inevitable" given the breadth of the agenda, "it works against the careful application of the evidence in forming policy".

Short-termism also hinders the gathering of sufficiently robust evidence on what early interventions or practices have most impact. The strongest evidence is of specific programmes, although gaps in knowledge exist even there, EIF admits.

It says this will only be overcome when local areas get better at gathering good data on the impact of interventions and using this information to influence service commissioning and delivery decisions more quickly.

The report concludes that the current system is not designed to fully enable early intervention, and that existing structural barriers need to be overcome. To do this, it calls for "clear leadership" at national and local level to improve the design and delivery of early help services and expand the evidence base of what works.

The EIF says "small, time-limited pots" of money are unlikely to make a "meaningful dent" in complex social problems, and instead calls for a new approach to funding that supports the development of whole-system approaches.

This view is shared by Sam Royston, director of policy and research at the Children's Society.

"The nature of the challenges that families experience often require long-term complex interventions, which recognise the whole system and the different agencies they interact with." He adds that where new approaches are effectively trialled, there needs to be an improved response to scale-up these interventions.

This is echoed by Daniel Breslin, senior policy adviser at Action for Children. He says: "If you look at the example of the Department for Education's Children's Social Care Innovation Programme, there is good emerging evidence of projects reducing need, but the sharing and scaling up of that does not seem to have been sufficiently captured."

Olly Swann, children's services director at consultancy Impower, says investment funds - such as the innovation programme - are the right way of testing approaches, but agrees "scaling them up quickly for the benefit of the whole sector remains a challenge".

"An effective and sustainable model for children's services requires a system-wide approach - the emphasis must be on prevention and early intervention to move away from high-cost, and often poor impact statutory provision, to earlier impactful prevention that builds resilience in families."

The EIF calls for the creation of a long-term investment fund to test in a handful of areas the impact that implementing a whole-system approach would have. EIF says the investment would help improve co-ordination of provision across childhood and adolescence and "enable us to understand for the first time what effective early intervention can achieve when the necessary conditions are in place in an area".

Royston welcomes the recommendation but says it would require a "huge amount of political will and interest", something that is currently lacking.

"The principle of trying to develop an evidence base for a system-wide approach is certainly something we could support." But he warns that piloting such an approach "cannot come in place of urgently needed investment in children's services to stem the flow of spending from early to late interventions".

To help local areas to tackle specific social issues, EIF recommends the creation of a separate "acceleration fund" to implement evidence-based early help programmes. This would enable local areas to bid for resources and support to deliver interventions that improved key outcomes such as school attainment, mental wellbeing and desistance from crime.

An independent panel of early intervention experts should be established to advise national government and other research funders on a long-term research strategy, including how to fill the gaps in knowledge as well as the development and piloting of new interventions where needed and understanding more about effectiveness in areas such as workforce practice and the systems needed to deliver early intervention services.

"This would include new evidence on what constitutes effective workforce practice, what systems are most effective in delivering early intervention services and the development and piloting of new interventions," EIF states.

The panel would underpin a system-wide commitment to evidence-based decision making and practice.

The Association of Directors of Children's Services (ADCS) agrees that more evidence of what works is needed. "In these uncertain times, it is vital that future policies are rooted in expert advice and that commissioning is smarter to ensure scarce public funds are maximised," says ADCS immediate past president Alison Michalska.

Swann backs the need to improve the early intervention evidence base including having better understanding of the impact of current spending.

He says: "Can it [currently] be demonstrated that early help and edge of care services are focused on evidenced needs within local families and communities, and that partner behaviours are understood and influenced by constant feedback? The answer is probably not.

"The sector needs to strengthen its argument for more funding by demonstrating a much deeper understanding of how money is currently spent and what difference it makes."

Under the EIF blueprint, a taskforce led by a senior cabinet minster would be established to co-ordinate policy and decision making on early intervention across government.

The taskforce, which would have input from government departments with an interest in improving vulnerable children's outcomes, would oversee effective use of the investment fund and acceleration fund, and respond to recommendations from the panel.

"The benefits of effective early intervention are shared by a number of government departments in the future and it is right that a taskforce be set up to recognise this," says Royston. "The recognition that the existing machinery of government isn't working to effectively prioritise early intervention is apt and the call for a senior cabinet minister to take responsibility for the agenda is the right one.

"The challenge would be to ensure that not all responsibility for this ends up resting with the Department for Education, as the recognised benefits of early intervention go way beyond [their] remit. As far as possible, local government and civil society should be involved in shaping the group's terms of reference and it should report to parliament regularly on progress."

EIF says the viability of early intervention locally partly rests on the need for local leaders to articulate a vision and strategy that is achievable. It is clear, however, that this should not be founded on the promise of short-term savings and be "realistic" about the impact it can have on reducing pressure in children's social care.

"There needs to be a shift away from the narrative that spending on early intervention delivers short-term savings for children's services," says Royston. "This needs to be replaced with a whole-life approach recognising that early intervention in childhood will deliver a number of positive outcomes that have the potential to impact how children go on to interact with adult services, housing, contribute to the economy and communities."

Michalska agrees that investment should not be solely seen through the prism of reducing social care pressures. She says: "The longer term benefits of offering parents a helping hand so they in turn can better support children's development are huge - clearly the individuals benefit from this investment, but so too does society at large."