Local safeguarding children boards (LSCBs) have the challenging and often complex task of bringing together many different agencies to agree area-wide approaches to safeguarding and co-ordinate funding - as well as commission serious case reviews and child death reviews and arrange joint training of professionals on child protection.

It is a role they have performed with mixed success, attracting much criticism - and sometimes sympathy - along the way.

A 2015 report by the Local Government Association and Research in Practice highlighted a lack of clarity on the role of LSCBs and insufficient power to hold partners to account. Other key barriers to effectiveness included lack of funding and staffing at key partner organisations (see graphics).

In June 2016, the government announced its intention to abolish the requirement for councils to have LSCBs alongside plans to scrap serious case reviews in favour of a new way of investigating child deaths.

The changes - to be enshrined in law in the Children and Social Work Bill currently progressing through parliament - followed a review of LSCBs by former president of the Association of Directors of Children's Services Alan Wood. His review was prompted by high-profile examples of where LSCB scrutiny or partnerships were found wanting, and in his report Wood said the evidence he had gathered showed boards "are not sufficiently effective".

However, organisations like the Association of Independent LSCB Chairs feel the review did not necessarily reflect the breadth and quality of LSCBs' work.

"While we'd be the first to acknowledge they need to continue to improve, the system is not broken and we do actually protect many children very effectively," says association chair David Ashcroft.

Since November 2013, LSCBs have been reviewed alongside single inspection framework (SIF) inspections of local authority children's services and given a stand-alone Ofsted rating.

Of the 122 LSCBs inspected up to the end of March, 40 were rated "good", 57 "requires improvement" and 22 "inadequate" (see graphics). Just two boards - City of London and Hackney, who share a board, and City of York (see case study) - were judged "outstanding".

However, while ratings for LSCBs and local authorities were similar, they matched in less than two-thirds of inspections, with boards performing slightly better overall than councils.

The pattern of LSCB overall effectiveness was more closely aligned to local authorities' performance when it came to services for children in need of help and protection.

Inspectors tasked with assessing the effectiveness of LSCBs have been on a learning curve, according to Ashcroft.

"In the first wave of SIFs, inspectors were not necessarily familiar with the complexities of managing multi-agency arrangements, so there was a real variability in what they looked for, how they reported it and what they picked up in those reviews," he says. "That has got much stronger and, by and large, reports are picking up the right things."

Under a new inspection regime for children's social services, LSCBs or their equivalent will not be explicitly inspected.

"How well arrangements work will only be judged as part of looking at leadership and management in a much more general sense rather than being a specific and separate judgment on those arrangements," explains Ashcroft.

Joint targeted area inspections will continue to examine how agencies work together and contribute to particular areas of children's services, but are not in themselves a comprehensive look at how partnerships work.

Ashcroft senses most areas will not entirely abandon current arrangements, but "retain something similar to what we have now".

While only a couple of LSCBs have achieved outstanding ratings, they are not the only ones doing excellent work, he stresses. He also says it would be helpful to get away from the idea that the bulk of LSCBs' work is done at meetings, with people from many different organisations sat around a table.

However, he fears that focus on safeguarding could become increasingly fragmented without a body responsible for keeping up momentum.

The new legislation extends the statutory responsibility for safeguarding to local authorities, police and health - ostensibly a good thing. However, there is a risk this could distance other key partners - such as schools and the voluntary sector - and create a "two-tier approach", adds Ashcroft.

"We know, as chairs, how difficult and challenging it can be to keep a large multi-agency partnership focused on what is in the best interests of children - our fear is this could become more difficult rather than easier," concludes Ashcroft. 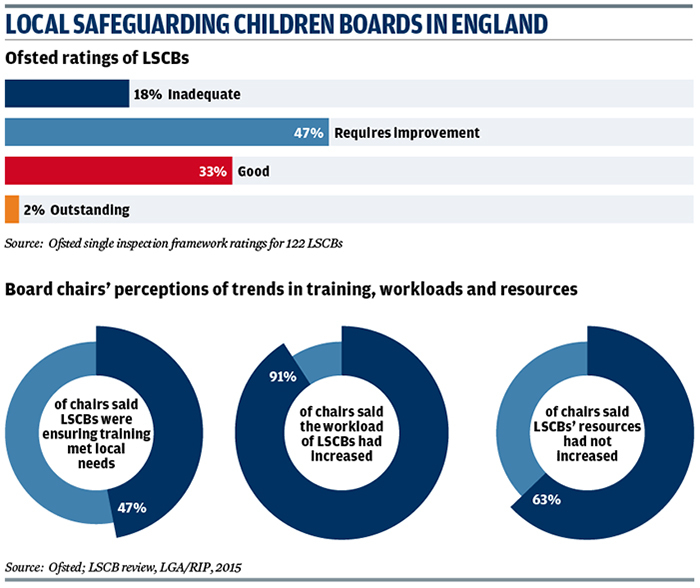 York board forges links with the frontline

City of York Safeguarding Children Board is "highly instrumental in influencing and shaping services for children", says its Ofsted report.

Inspectors highlight the "resolute" leadership of independent chair Simon Westwood, who admits the role of chair is key when it comes to ensuring all partners are committed and working to a common goal.

Relationships are also key and it is part of the chair's job to ensure these are maintained and strengthened, and to foster "a climate of openness, trust and respectful challenge", he adds.

He says it is important to see safeguarding in its widest context. "We have a strong partnership between the LSCB, safeguarding adults board, health and wellbeing board and children's trust in York and have a joint chairs meeting."

Planning work across these key bodies and setting out clearly which organisation will take the lead reduces duplication and inefficiency. "If it is confusing where the ultimate accountability or decision-making lies, that's when things go wrong or - best case scenario - you waste a lot of time," says Westwood.

Among the strengths pointed out by Ofsted is the board's "very clear focus on frontline practice".

"One of the things I have done as chair - and encouraged other board members to do - is to go and spend time with frontline practitioners and hear their story direct," says Westwood.

In particular, he has reported back on vital "front door" services in social care and the police.

When frontline staff reported teething problems with a new IT system, the board was able to help ensure these were swiftly resolved.

Larger-scale successes include the joint It's Not OK campaign with the NSPCC to raise awareness of child sexual abuse and exploitation. Its strength was "real engagement with frontline staff aimed at getting the messages into the community", he says.

The board has also forged ties with education, and includes representatives from primary, secondary and independent schools - including academies. It has championed schools' crucial role in supporting vulnerable children and this has influenced policy including investment in pastoral support staff for children with emotional difficulties.

Looking to the future is also key. City of York LSCB started discussing the implications of changes to local safeguarding arrangements early on. "Even though we have that outstanding judgment, we know there are still things we want to improve on and we continue to try to find ways to develop and be smarter and try and get more impact on services on the frontline," says Westwood.

This might include "sharpening up the accountability" of the existing chief officers' reference group, where Westwood meets regularly with senior officers from the council, police and health.

The LSCB could also consider strengthening the role of a co-ordinating group that already does a lot of the groundwork and "possibly slimming down the work of the board so it is less ponderous".

"Whatever happens, we are really keen to make sure we don't lose all the goodwill we have got from a wide range of other partners - schools, probation, the community and voluntary sector," he concludes.