There will always be early years settings unhappy with the rating they receive from Ofsted. Jo Stephenson looks at the options for appealing the decision and the processes to follow.

While 94 per cent of early years providers are now rated "good" or "outstanding", for the small proportion who receive a negative judgment the impact can be devastating.

"The implications of a poor inspection can be the end of a setting," explains Michael Freeston, director of quality improvement at the Pre-school Learning Alliance.

"Particularly when it comes to two-year-old [free childcare] funding because settings are not allowed to take it unless they are rated good or above. Meanwhile, local authorities have the discretion to take three- and four-year-old [free childcare] funding away if you are less than good so these are serious considerations that need to be borne in mind."

Concern about early years inspection judgments is not that much of an issue currently, he explains.

However, it was a different story in 2013 when the introduction of a new inspection regime saw the proportion of settings achieving the good and outstanding ratings plummet almost overnight and a significant increase in those rated "inadequate".

There was widespread concern about fairness and consistency but things are now back on an even keel - partly because the sector has got much better at demonstrating what it does - especially when it comes to education, explains Freeston.

There have also been changes in the way Ofsted handles complaints and in who carries out inspections.

"As of April 2017, all our inspectors work directly for us," states Ofsted's 2016/17 annual report. "This improves communication and allows us to provide training and support directly."

In 2016/17, Ofsted set itself a target of meeting 95 per cent of quality standards across all inspection remits. This target was met for schools and social care but narrowly missed for further education and early years.

"Where quality standards are not met, this may be because an inspector's writing initially lacked clarity, or because a draft report has not met all the reporting requirements," says the annual report.

"Our quality assurance arrangements mean that before a report is published we address any issues that have been identified so that published reports meet the required standard."

Meanwhile, in September 2015 the regulator introduced a new level of independent scrutiny to its complaints process in an effort to make it more transparent, fair and objective (see below).

Ofsted's annual report shows complaints have fallen across all the areas it inspects for two years in row with just 2.2 per cent of inspection activities resulting in complaints in 2016/17 (see graphics). 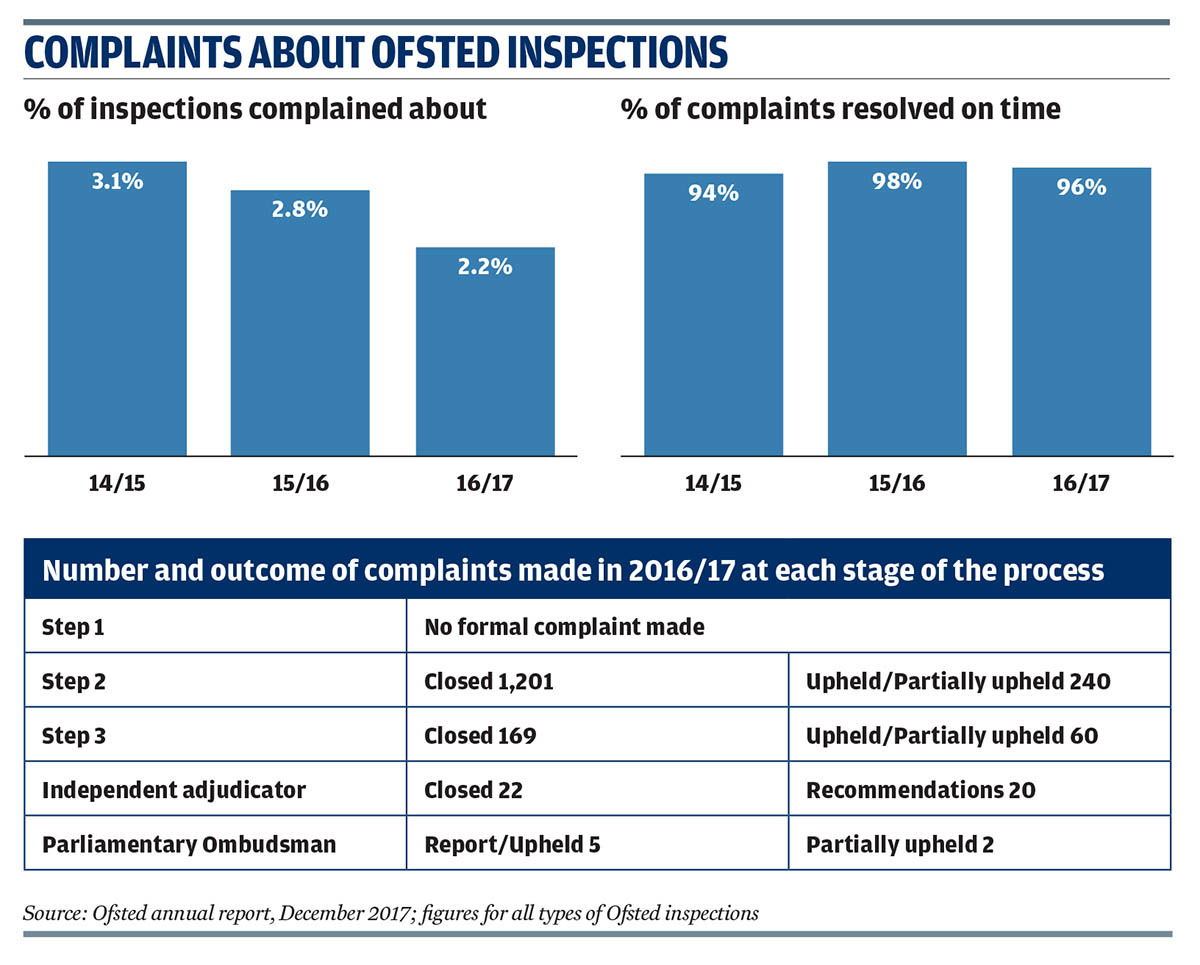 "We are open and transparent about our procedures for complaints about our work. That is why sector representatives who do not work for Ofsted provide further independent scrutiny as part of the internal review process," says an Ofsted spokesman.

"But we would always hope it doesn't get to that stage. If any early years setting has a concern about Ofsted's work, we urge them to raise it as soon as possible, so that the concern can be considered and resolved swiftly."

Freeston agrees that addressing concerns at the earliest opportunity - during an inspection or at the draft report stage - is the best way to go.

"If the inspection has been carried out well then you would have been actively involved in the inspection, doing joint observations with the inspector and having conversations with parents," he says. "There should have been ongoing feedback throughout the day about the emerging findings so that should give you the opportunity to address any comments that you feel don't reflect your practice and improve things as the day goes on."

However, if a nursery manager is not happy with a final inspection judgment then his advice is "don't complain in haste".

"Obviously you're disappointed, frustrated, angry if things haven't gone well but don't immediately fire off an email to Ofsted," he cautions. "You have got to look at it objectively and discuss it with colleagues first. Sleep on it or come back to it after the weekend and reflect on whether actually you could have done X better or perhaps didn't show the inspector some evidence that may have changed the judgment.

"It has got to be a very dispassionate consideration of whether there are genuine grounds for challenging a judgment."

It could be that making a complaint is cathartic and some managers may feel it is important for staff morale and has a value in itself when it comes to galvanising both practitioners and parents.

But Freeston says time and energy may well be better spent thinking about how to show improvement for the next inspection visit, which will be within three months if a setting is rated inadequate or six months if judged "requires improvement".

"We would ask a setting: is it better to use your energies appealing the last one or should you just say: ‘Okay they've judged this, we believe they're wrong, let's show them they are wrong when they come back in three or six months'," he explains.

"As well as being honest with yourselves during that period of reflection, it is important to have conversations with parents to say: ‘We've had this, here is why we believe it happened, does that impact on your view about whether your child continues coming here?' and in many cases it doesn't.

"It's not all about the Ofsted grade - we obviously fixate on it within the sector but for parents it might not be the be all and end all that we fear. Being open and honest with parents is a major point of the improvement process - as well as making sure those parents are then available to actually talk to the Ofsted inspector when they come back."