Research findings support local government calls for a 'reboot' of how SEND services are commissioned.

Amid growing concerns about rising numbers of pupils with special educational needs and disabilities (SEND), the government is to give councils an extra £250m to increase support in schools over the next two years and £100m to invest in better facilities.

The move, announced by Education Secretary Damian Hinds in December, came a day before the publication of latest Local Government Association (LGA) research on the scale of the cost pressures in council SEND budgets. It calculated that the funding deficit in the SEND budget would be £800m this year rising to £1.6bn by 2021.

In addition to extra funding, Hinds revealed plans to make it easier for special free schools to be established, to create a leadership board to oversee SEND policy (see box), to commission new research on the issue, and train more educational psychologists.

Children's services and local government leaders welcomed the announcement, but warned that it was insufficient to avert an impending "crisis" in SEND support, and instead called for a "fundamental reboot" of the responsibilities and powers councils have for commissioning SEND services.

Bramble wants the government to raise the dedicated schools grant to reflect the growing funding pressures faced by councils, while the Association of Directors of Children's Services (ADCS) says "bold action" in this year's comprehensive spending review is needed if the issue is to be resolved sustainably.

"The £125m per year on offer falls far short of solving the crisis, let alone the existing and projected funding gap or the raised expectations of parents and carers," says Matt Dunkley, chair of the ADCS resources and sustainability policy committee.

"Councils are deploying a range of measures to address this overspend, from transferring money from other pots of school funding and utilising reserves but this offers a temporary sticking plaster and is unsustainable."

The LGA research, undertaken by ISOS Partnership from the responses of 93 councils, found a range of factors have contributed to the SEND funding crisis, including:

The number of children and young people with a SEN statement or education, health and care plan has risen 35 per cent between 2014 and 2018.

A key factor in this rise has been the extension of councils' SEND responsibilities for young people up to the age of 25 since 2014.

Demographic changes, including advances in medical science and better diagnosis of conditions, have seen a rise in children with complex needs.

The number of children permanently excluded from schools rose 67 per cent between 2014 and 2018, putting pressure on high needs funding.

A total of £547m of additional funding has been transferred from other budgets to support the high needs block between 2015/16 and 2018/19.

Only six per cent of SEND children attend independent and non-maintained special schools but it accounts for 14 per cent of expenditure, £277m a year.

However, Tania Tirraoro, founder of parent-led website Special Needs Jungle, says the findings reflect societal changes that councils and government need to "catch up" with.

"More children with complex health conditions are surviving into childhood and need to be catered for; numbers of children with autism are rising," she wrote on the site. "Society and modern teaching pressures mean children with attention deficit hyperactivity disorder and other difficulties find it hard to learn, so require a specialist setting to reach their potential.

"Government and authorities need to stop clinging to the models of old and forecast how the future of the world looks for SEND."

The LGA survey suggests the situation will deteriorate before it gets better - only three per cent said high needs spending will fall and six per cent do not expect to balance the budget in the year ahead. 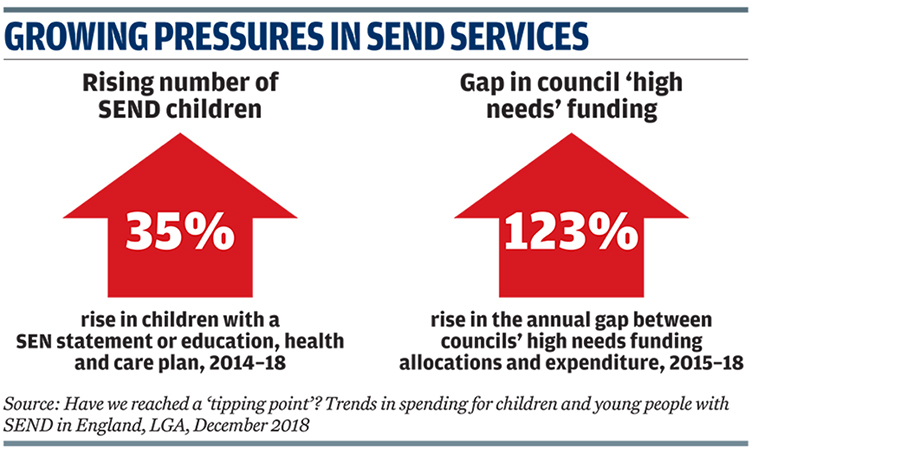 GUIDE TO THE SEND SYSTEM LEADERSHIP BOARD

The new SEND leadership board will aim to drive improvements in local SEND services and share best practice nationally. It will include representatives from bodies, including the LGA and ADCS, and will work with charities, schools and families. It aims to: