A public health approach to tackling violent crime has been credited with cutting the murder rate in Scotland. Experts say the same model should be used in London following a rise in knife crime involving young people.

The deaths of four young Londoners from separate knife attacks over the new year period has prompted a renewed focus on the most effective approach to reduce the capital's rising knife-related crime rate.

Debate has centred on whether the rise is linked to a recent reduction in the use of the controversial police tactic of stop and search, and whether this needs to be reversed, or whether a public health approach to tackling knife crime needs to be adopted.

Latest NHS Digital figures show knife-related injuries of children and young people aged 18 and under have risen by around 40 per cent nationally in the past five years. In London, 350 injuries were recorded in 2016/17, a 25 per cent rise on the 280 injuries recorded in 2012/13 (see graphics). 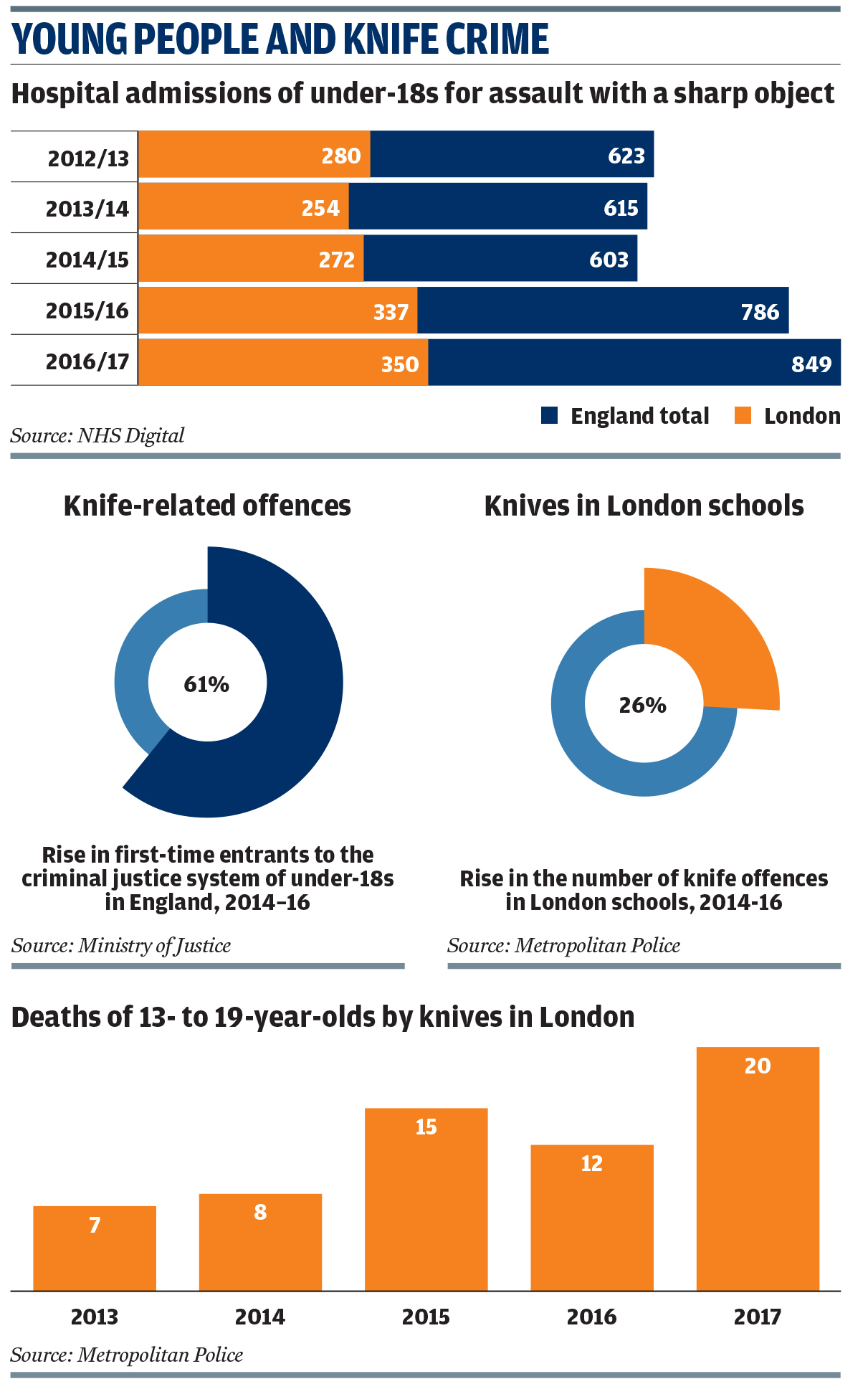 In addition to the rise in injuries, the number of deaths of 13- to 19-year-olds in London due to stabbing has also increased significantly - last year, 20 young people were killed in knife-related incidents, nearly double the number in 2016. The last of these was a 17-year-old college student who died in Tulse Hill at 10pm on New Year's Eve.

In response to the latest spate of deaths, London mayor Sadiq Khan says there will be a "significant" increase in the use of targeted stop and search in an attempt to "crack down" on violent crime and take knives off the streets of the capital before they are used. However, the mayor's tough approach has been criticised by youth crime experts.

Labour MP for Tottenham David Lammy, author of a 2017 review into the treatment of ethnic minority groups in the criminal justice system, says he is "disappointed" that the "vexed issue of stop and search is again being used as a political football".

Lammy's review found that black and minority ethnic (BME) young people were disproportionately more likely to be involved in every stage of the criminal justice system than white peers. One factor in this is the use of stop and search. Home Office data published last year showed the use of stop and search was at a 15-year low, but while the number of white people stopped was down 28 per cent, the fall for BME groups was down just 11 per cent.

Ben Summerskill, director of the Criminal Justice Alliance, says BME communities think stop and search is unfairly targeted at them. Writing in the Guardian he said: "For five years Londoners have been told that stop and search was being better targeted. Yet last year black people were stopped by the Metropolitan police on 30,000 occasions without any further action taken. That's hardly ‘intelligence-led' policing."

One London youth work leader says "intelligence-led" policing is often code for targeting gang members. "But only 25 per cent of knife crime is perpetrated by gang members - what do you do about the other 75 per cent?"

He says police should work in partnership with communities to decide priorities for stop and search locally.

Other youth crime experts say viewing knives as a public health issue would be more effective as this could incorporate a wider range of interventions, public services and professionals.

Jo Broadwood, chief executive of StreetDoctors, says the public health approach to tackling knife crime is based on research that shows that violence is contagious.

"Much like an infectious disease, witnessing violent behaviour increases the risk of individuals adopting similar behaviours," she explains.

StreetDoctors is a charity that works with young people at risk of getting involved in violent street crime, educating them in practical life-saving skills and supporting them to change their attitudes towards violence.

Broadwood says StreetDoctors works with more than 130 partner organisations across the UK to utilise a range of different interventions to tackle youth violence.

No single organisation can solve this issue on its own," she says. "To effect longer term change we need statutory and public sectors to work more closely with the voluntary and community sectors. And we have to invest for the long term; in evidence-based community initiatives; community role models and mentors, and services that young people can access quickly when they need them most."

Metropolitan Police commissioner Cressida Dick has also called for the adoption of such an approach in recognition that tougher policing does not hold all the answers. Speaking to the London Assembly in January, Dick highlighted the success such an approach has had in Glasgow.

Dick said: "The public health approach is well evidenced in Scotland. There are very different communities, very different dynamics and very different issues around violence and, indeed, youth violence but, nevertheless, there have been massive reductions in violent crime through a primary health lens."

"We're seeing young people in emergency departments but we have to look at how we can work with them up stream," he says.

"Knife crime is a symptom and we need to look at the root causes of it such as issues in the family, poverty and trauma."

Poyton says tackling knife crime as a public health issue should see the Department of Health, Department for Education and Home Office take a joint lead nationally, with agencies and professionals across health, social care, youth work, youth justice and education delivering services in partnership on the ground.

"I think we need to spend some time thinking about the terminology because no one really knows what a public health approach means," he says.

"We've got to think of all the different parts of the community and sectors that need to play a part in preventing transmission of this ‘disease'.

"Youth workers have an opportunity to be part of that solution. There is a need for keyworkers to co-ordinate all the agencies that have an input and youth workers could play that role to ensure they link up to meet young people's needs."

Glasgow has been held up as an example of what can be achieved when a public health approach is adopted - since 2005, when the city had one of the worst knife crime rates in the world, the number of victims has fallen dramatically. A specialist Violence Reduction Unit was established by Strathclyde Police with multi-agency input, and an education awareness programme introduced in city schools.

A similar approach was introduced by West Midlands Police in 2015. The West Midlands Violence Prevention Alliance is funded by the police, Public Health England and the area's police and crime commissioner (PCC). It has been working with the region's councils, hospitals and charities to provide services that prevent violence and gather accurate data on where violent incidents take place so that interventions can be better targeted.

West Midlands Police say 43 per cent of violence victims in the area are aged 10 to 24, and "breaking the cycle of violence affecting young people" is a key aim of the initiative, according to West Midlands PCC David Jamieson.

In the current absence of a similarly co-ordinated approach in London, local authorities have set up their own initiatives. For example, in Camden, which saw an eight per cent increase in knife crime injuries last year, the council has launched the Youth Safety Taskforce, which aims to uncover the key reasons behind the rise.

Youth workers are to carry out a crucial role by speaking with young people about their day-to-day experiences of violence. One particular objective is to learn about the role of social media in provoking youth crime, and understand patterns in youth offending.

Abdul Hai, Camden Council's cabinet member for young people and cohesion and Taskforce co-chair, says: "Recent trends mean we have to take a fresh look at this issue and how best to tackle it. The taskforce will help us to hear from as wide a group of people as possible.

"We need to make sure our young people can feel safe on the streets of Camden and that we listen to their concerns."

In 2005, the Violence Reduction Unit (VRU) was established by Strathclyde Police with the backing of the Scottish government to find a solution to the high levels of violence in Scotland - a report had just been published by the United Nations to confirm the grim title of the "most violent country in the developed world". The VRU set about a worldwide search for approaches which could genuinely reduce violence in all settings in Scotland.

One of the first actions of the VRU was to campaign successfully for mandatory sentences for knife crime. However, the most significant element of the VRU work was to shift the thinking that violence reduction was solely a police-related activity, to a perspective that it required wider public health related activity. There was tangible action that could be taken by health, education, youth workers and employment services. The key to success was identifying those involved and giving them an alternative option - a way out of a violent life. The impact has been significant, with dramatic falls in homicide deaths being almost halved in the decade up to 2017. There is a long way to go, but the direction of travel is impressive.

So what might London learn from Scotland? First, London is not Scotland and we should be cautious of transposed problem solving. Second, the nature of London knife crime is best understood by those closest to the action, and this will shape the approach taken. The third lesson is that a public health approach has been proven to work in Scotland and the compelling evidence is that it could make an impact in London. I think the Metropolitan Police commissioner, Cressida Dick, is on the right lines when she acknowledges that "the public health approach is well evidenced in Scotland" and I would encourage her to take the lead in developing this in London.