Research in 2011 estimated that up to 20 million children were living as orphans in India, four per cent of the country's total child population.

Research in 2011 estimated that up to 20 million children were living as orphans in India, four per cent of the country's total child population.

Some orphans end up living on the streets of India's major cities - as depicted in the Oscar-winning film Slumdog Millionaire - but many live in state-run orphanages.

However, in 2017 Save the Children raised concerns about the poor standards in some state-run homes. Orphaned children are also among the most susceptible to poverty, child labour and child trafficking, studies have shown.

A different approach has been developed by charity SOS Children's Villages, one that tries to combine the benefits of fostering alongside those of residential care.

SOS Children's Villages contain a collection of homes each supporting a group of child orphans in family-based care (FBC) arrangements. There are 32 such villages, supporting 6,500 children.

SOS Children's Villages is an independent not-profit organisation that works for the holistic development of parentless children and women and children living in vulnerable families. It has been running in India since 1964, and the operation in India is the largest of 134 countries that make up the SOS International Federation.

SOS Children's Villages India has more than 1,700 employees working in projects across 22 states. More than 25,000 children are receiving holistic care, love and protection through FBC and its other flagship initiative Family Strengthening Programme. It also provides education and vocational training to over 7,000 children and young people.

SOS Children's Villages India has specialised in working in communities and areas that have been affected by man-made and natural disasters, and areas prone to these. These have included the gas leak tragedy in Bhopal, earthquakes in Latur, Uttarkashi, Gujarat & Kashmir, terrorism in Kashmir and Punjab, the hurricane in coastal Andhra Pradesh, and Tsunami in Tamil Nadu, Puducherry and Andaman & Nicobar Islands

Only those children who are in need of a new home in a permanent family environment and for whom no other suitable care placement can be found are considered for admission into an SOS family. In general, children up to the age of 10 can be admitted. However, when a group of siblings is admitted, the age may vary.

SOS Children's Villages' member association from respective countries define the criteria of admittance. The decision whether to admit a child is then made by a committee consisting of the village director, an SOS Mother, social workers, and sometimes the national director of the association, in co-operation with the local governing authorities. 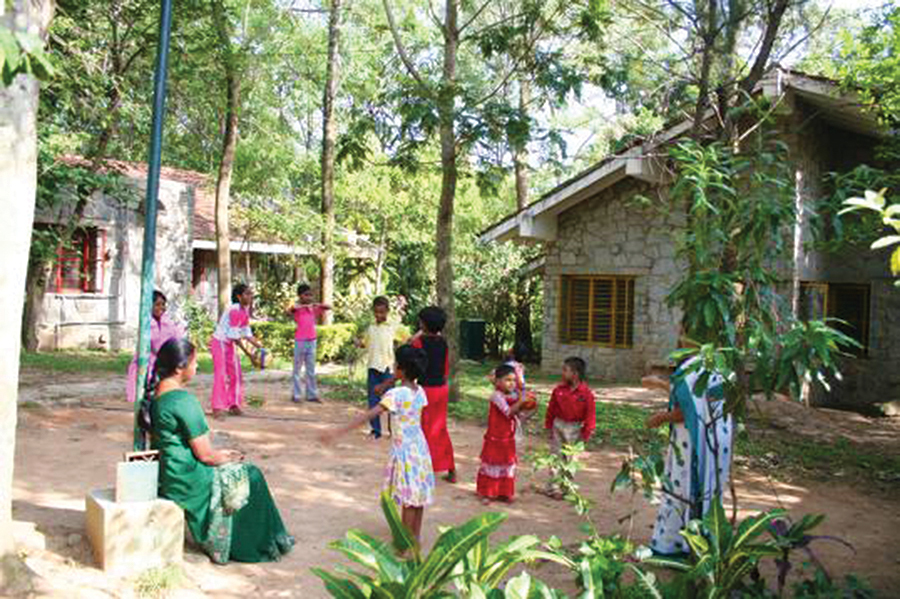 "As soon as we put the child in an institutionalised environment, the individuality of the child is lost and so is individualised care," writes Bansal, adding that this can inhibit the participation of children in making decisions about their care and expressing their views.

Ensuring safeguarding and transparency of decision making is also harder.

Despite the higher death rates linked to poverty and disease in India, 2011 research by SOS Children's Villages found that just 0.3 per cent of orphans are children whose parents have actually died. The majority of children have been abandoned.

The high proportion of abandoned children among orphans highlights the fact that poverty is a major reason behind the situation, the organisation says. The study found that poorer states such as Uttar Pradesh, Bihar and West Bengal had more orphans than India's richer states in the north and south.

Poverty is the most significant contributing factor, although social unrest and the impact of HIV/Aids is also present.

Under the FBC approach, each children's village has 12 to 15 family homes, with every home consisting of 10 children on average along with an SOS Mother. All-round development including education, nutrition, health and psychological development is taken care of until the children are settled in their lives.

The SOS Mother builds a close relationship with every child and provides the security, love and stability as needed. As a child care professional, she lives together with the children, guides their development, and runs her household independently. She recognises and respects each child's family background, cultural roots and religion.

Girls and boys of different ages live together as brothers and sisters, with birth siblings always staying within the same SOS family. Children grow and learn together, sharing responsibilities and the ups and downs of daily life.

SOS Families form a supportive village environment. The families share experiences and offer one another a helping hand. They also live as integrated and contributing members of the local community. Through his or her family, village and community, each child learns to participate actively in society.

SOS Children's Villages India also delivers a community-based prevention initiative called Family Strengthening Programme. This covers more than 17,000 children at 32 locations across India, and is designed to prevent children from losing parental care or being abandoned.

This programme runs in the city slums and rural areas, within close proximity to an SOS Children's Village. It targets help at the most vulnerable groups including single parents and very poor families. Spanning three to five years, the programme aims to enable families to move out of the vicious cycle of poverty towards greater dignity and self-reliance by helping educate children and improve the income-generating capacity of care givers.

Some years ago now, the Care Inquiry found that relationships are the "golden thread" running through a child's life. That remains true today and at it's the reason why, at The Fostering Network, we believe in the transformational power of good foster care - foster carers build strong, nurturing, lasting relationships with children and young people which allow them to flourish.

What is particularly striking is the similarity between the ethos of the SOS Children's Villages and our Mockingbird programme. Mockingbird is rooted in the idea that "it takes a village to raise a child". It uses the Mockingbird Family Model - originated by the Mockingbird Society in the United States of America - which centres on a constellation where one foster home acts as a hub, offering planned and emergency sleepovers and short breaks, advice, training and support, to six to 10 satellite fostering and kinship care families.

Relationships are central to the programme and the hub home builds strong relationships within the constellation, with other families important to the children's care plans and to resources in the wider community which can provide them with enhanced opportunities to learn, develop and succeed.

Through regular activities, the Mockingbird constellations - like the SOS Children's Villages - develop supportive communities like an extended family, providing children and young people with a more positive experience of care.