Most easterly London borough is investing in early help services in response to a recent influx of children and families.

Once seen as a retirement destination, Havering Council now has one of the fastest-growing populations of under-18s in the capital.

The borough, sandwiched between Essex to the east, Barking and Dagenham to the west and the River Thames to the south, has seen its population change in recent years as a result of more families moving into the area (see graphics).

Many of the newcomers have moved to the borough because of its cheaper housing costs compared with those of inner London. 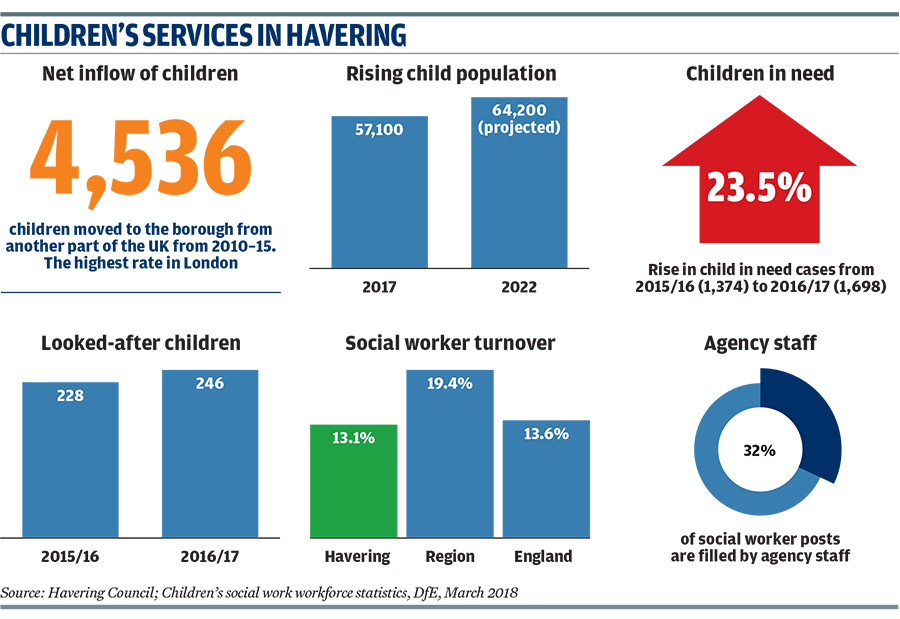 The change in demographics in Havering is being driven by cheaper housing, although the arrival of Crossrail [in 2019] is seeing prices rise. The volume of our work is linked to this rising demand. Some are moving here due to welfare reforms [the introduction of housing benefit caps]. Some have complex issues and problems, and moving away from family and social networks can exacerbate these.

We are seeing a lot of contact coming into the front door of children's services, however looked-after children numbers have stabilised and are now more in line with statistical neighbours.

We've invested in early help in response to this. In early 2017, we launched Families Together, our edge of care service, and have refreshed our children's centres by targeting support at families in most need. That works with socially isolated families and those affected by domestic violence and mental health issues. We've also recruited volunteer family coaches to work with families that don't need statutory intervention but some support. It has appealed to retirees and those seeking a route back into employment.

We need to be really purposeful in our work with children in need - we have to be working to strengthen families' resilience and to manage change and problems as they come along.

Our 2016 inspection judged us "inadequate" for leaving care services, and we have developed a new approach to pathways planning called Cocoon funded through the Children's Social Care Innovation programme. Pathways co-ordinators have been introduced to help young people transition from care successfully and ensure they get the housing, employment and mental health support needed.

In the year up to March 2017, the proportion of permanent social work staff has risen from 55 to 70 per cent, and I have just secured corporate support to increase salaries for team manager roles by £8,000 annually. We want to recruit four or five team managers and get our proportion of permanent staff up to 80 per cent by March 2019. That's achievable given the progress in recent years.

It's not difficult to recruit newly qualified social workers - we have a good relationship with Frontline and Step Up to Social Work - and have just won the bid to run the East London Teaching Partnership. The challenge is to attract experienced staff; that's why we are offering fast-track career progression pathways for those with the ability and interest.

I also co-lead the sector-led improvement work in East London, and I think we'll see more collaboration across the region in the coming years.