Informal engagement of young people who are often involved in gangs leads to significant improvements in participants' mental health.

Projects cost between £300,000 and £500,000 annually, funded through charitable trusts and partnerships with statutory services

Charity MAC-UK was founded by clinical psychologist Dr Charlie Howard, and grew out of her frustration at marginalised young people continually missing appointments. She used her experience of working with New York gangs to reach this group, "hanging out" for six months on an estate in Camden, north London, to build relationships, then seeking young people's help in developing a project to engage them and their peers. "Through spending time with them, conversations you could describe as therapeutic were able to take place in informal, non-pressured, non-stigmatised ways," explains charity chief executive, Sinem Cakir.

The result was the Music & Change project, which informed the charity's Integrate approach and "street therapy" model and led to three further London-based projects: Positive Punch in Camden, from 2011 to 2014; Reach Out/Out Reach in Southwark from 2012 to 2015, and Project Future in Haringey, still ongoing. To date, MAC-UK has engaged more than 500 young people.

Integrate sees clinicians reach out to marginalised young people, often involved in gang-related activity, wherever they are. The team includes a clinical psychologist and detached youth worker, helped by a local "community gatekeeper", such as an influential peer group leader, who helps broker relationships. Instead of professional referrals, young people attend following peer recommendations, perhaps just seeing it initially as "a safe place to hang out" says Cakir. They co-design and deliver a project based on their interests, such as music.

Staff develop rules and a code of conduct with participants, who may take on specific roles within the project, receiving support to plan, organise and reflect. Project planning includes risk assessments, which Cakir says present a "great opportunity" for therapeutic work. "The therapist can ask about scenarios where fights might break out and how they can manage things to prevent that. Young people respond really pragmatically; not seeing this as about their mental health, but about enlisting their help to make an event workable," she explains.

Through working alongside participants, clinicians develop an understanding of their world and the challenges they face. This informs their therapeutic interventions, in which participants can engage at their own pace, in non-clinical environments such as a court waiting room, café, or street corner. "There's no expectation that they turn up at clinic appointments for 10 weeks, then the job's done," says Cakir. "They're on this journey for two or three years."

Integrate teams support participants with practicalities such as CV writing, housing applications or advocacy, helping them link with services such as job centres. They also encourage social action and lobbying activities. 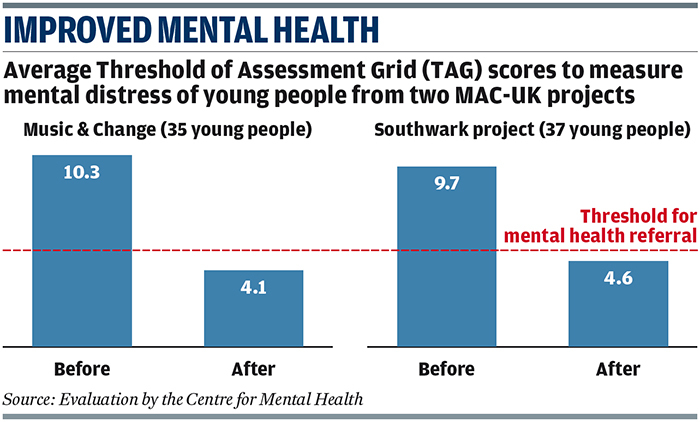 In March 2017 the Centre for Mental Health published an evaluation summary of MAC-UK's three completed London projects. This found significant improvements in participants' mental health looking at Threshold of Assessment Grid (TAG) scores, used to determine whether a mental health referral is needed. A score of five is the threshold for referral.

Results from the initial Music & Change scheme, which ran from 2008 to 2015, show TAG scores for 35 participants dropping from an average of 10.3 to 4.1. Between 2013 and 2014, the proportion of young people accessing education, employment and training increased from 43 to 74 per cent.