How to address the childminder decline

As warnings go, it is stark: in just 15 years' time, childminders could be a thing of the past if the current decline in numbers continues.

That was the claim from the Professional Association for Childcare and Early Years (Pacey), as it launched its inquiry into childminding in the 21st century recently.

This is being driven by the fact that currently more people are leaving childminding than joining; the Ofsted figures show that in first three months of 2019, 1,325 childminders left the childcare sector and just 544 joined.

The number of joiners is also slowing - it is lower than the same period over the previous three years. Between January and March 2016, there were 900 joiners, for instance (see graphic).

Yet at the same time, standards are high. In their most recent inspection, 78 per cent of childminders were judged "good" and 17 per cent "outstanding".

In addition, on 31 March 2019, 92 per cent of childminders who were previously judged as "requires improvement" or "inadequate", improved to good or outstanding at their most recent inspection.

Pacey hopes the inquiry's feedback from "childminders past, present and future" will help to reverse the downward trend in numbers and reinvent the profession for this century. 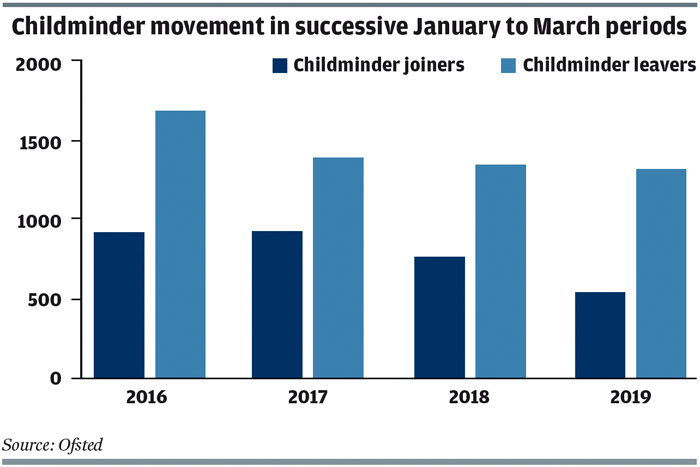 Liz Bayram, chief executive of Pacey, says that there is currently a lack of data on why childminders are choosing to leave the profession. However, she added that anecdotal evidence points to a number of factors, including the rise of flexible working practices in recent years, giving people more options to balance work and home life so need less childcare.

She noted that some blame has been put on Ofsted regulations and reporting duties, but added there are "urban myths" about the burden of paperwork, and that the new inspection framework will lighten the administrative load.

However, the burden of paperwork from local authorities is a problem, Bayram added, such as what is needed to show councils how you are improving outcomes for children, so they can then report to government on this.

"The difference between nurseries and childminders is they don't have a member of staff to do this - it is usually just one person running their business and thinking about planning and engaging children in the Early Years Foundation Stage," Bayram says.

Another major problem is earnings. "Individuals who deliver resident childminding… don't necessarily earn significant income. We hear frequently that there comes a point where people love the job, want to carry on, but can't afford to as they have bills to pay and are going to work for Tesco because they can earn more."

Allied to that is the decline in financial support for childminders. The government closed its Childcare Business Grant Scheme for newly registered early years childminders and childminder agencies in England in March 2019 because of low take-up.

This move was criticised at the time by early years organisations as something that would likely accelerate the decline in childminders.

But a Department for Education spokesperson says: "We continue to support the childminding sector through our range of resources that include business and partnership support, as well as to increase parental awareness of the option of childcare as both a career and a childcare choice."

Government funding is something that does need to be reformed if the decline in childminders is to be addressed.

"When it comes to something like receiving funding for looking after related children, the government hasn't budged," says Neil Leitch, chief executive of the Early Years Alliance. "That's not good enough: if government wants to solve this crisis in falling numbers, then what it should be doing is increasing funding levels, not tinkering around the edges with headline-grabbing but ultimately ineffective policies."

Leitch added that there is no "silver bullet" when it comes keeping childminders in the sector.

"I do think that allowing childminders to receive funding for looking after related children would make a difference," he says.

"It doesn't really make sense to have an Ofsted-registered professional effectively prevented from providing high-quality care to a child when, because they're related, the parents will be unable to claim funding for it."

The image and status of childminding also needs to change, Leitch adds. "There's this idea that childminders are somehow unofficial, informal babysitters and l think everyone, from ministers to others in the sector, has a part to play in putting this right.

"We should be clear that childminders are invaluable professionals: they're delivering the EYFS, they're inspected by Ofsted, and the vast majority of them are providing an exceptional early education for our children."

Stella Ziolkowski, director for quality and training at the National Day Nurseries Association, agrees that the perception of childminding needs to change in order to attract people from different backgrounds into the sector.

"Tapping into people who might work in construction or warehousing [for instance]. Is there some sort of initiative that government can think about doing that would attract new talent into the sector as we are losing so many people?"

Megan Jarvie, head of Coram Family and Childcare, added that more needs to be made of what childminders can provide, particularly for families who do not work the typical nine to five or live in rural areas.

"If childminder numbers continue to decline, families might find it increasingly difficult to be able to find the childcare that is right for them," she says. "That's why it's important to understand the reasons why childminder numbers are decreasing and whether more should be done to support people with the right skills to become childminders or stay in the profession."