The study surveyed 120 early years providers - including private and voluntary nurseries, maintained nursery schools and childminders - between March and July 2018, and compared data to that collected by a Department for Education study in 2015.

Over the three years, the cost of providing a childcare place rose by 13 per cent across all settings, with costs rising fastest for private providers and childminders. The rise was lowest for maintained nursery schools, although their hourly place cost is more than other settings because of higher staff costs (see table).

The study concluded that rises in inflation, the minimum wage and pension contributions could account for 10 per cent of the cost growth over the past three years. 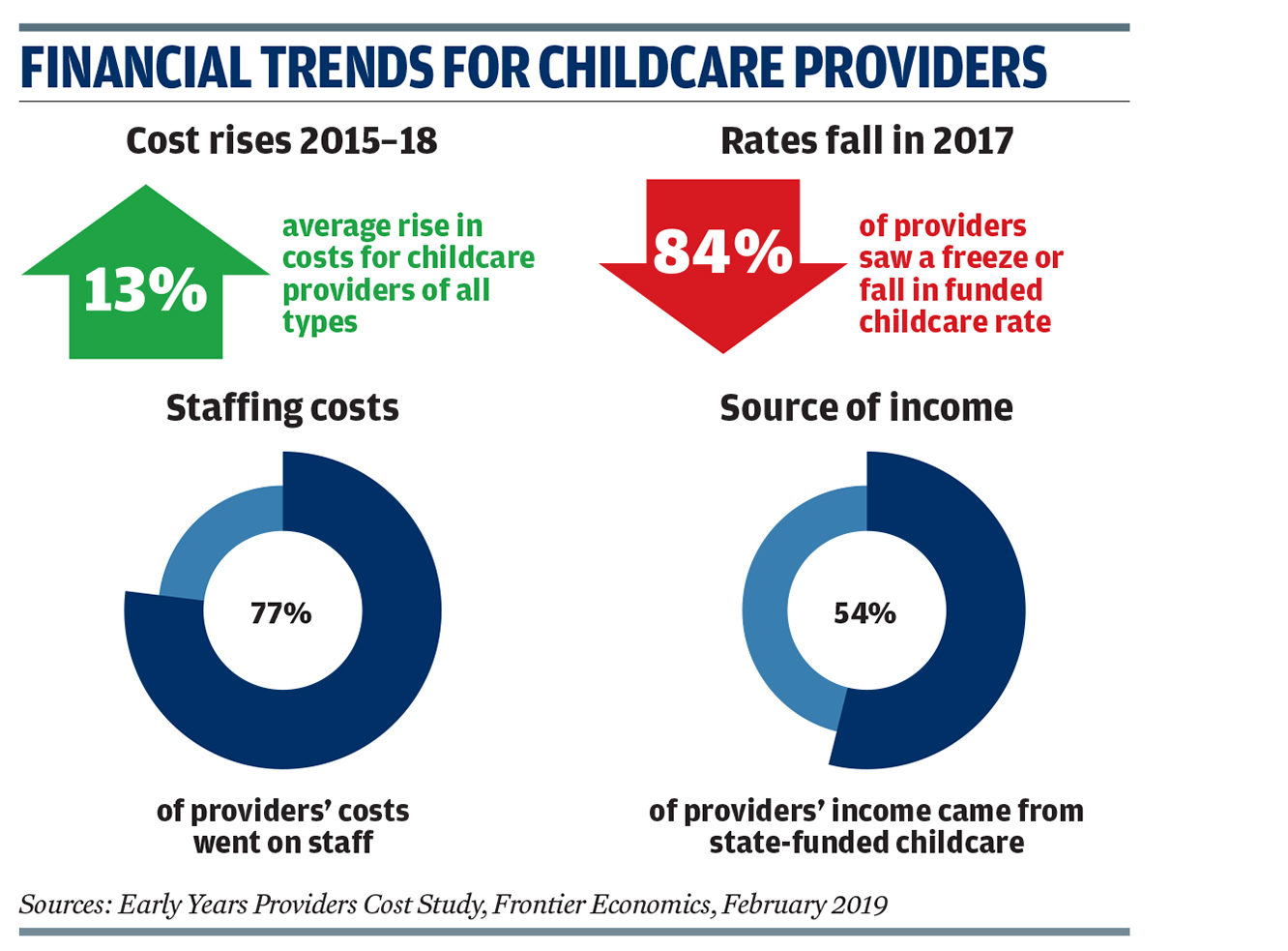 Staff costs are not only the most significant of provider outgoings, they're probably the area which have increased the most in recent years. That would be fine if funding levels matched the true cost of delivering quality childcare, but they don't. In fact, funding rates are largely based on data from 2012/13 and don't take into account subsequent hikes in the national minimum wage or the introduction of auto-enrolment pensions.

Ministers love to talk about how important early years are, but they simply don't want to pay for it. I can think of no other sector reliant on government funding where low pay and weekly closures of vital services would be so readily accepted - but that is exactly what is happening. I've lost count of the number of providers telling us they're worried they'll have to close next month.

As the report shows, underfunding will lead to higher parent fees pricing out lower income families and will force settings into turning away children with SEND because they can't afford to look after them.

None of this will be news to the government - this is just the latest report to lay bare the extent of the childcare funding crisis. The research makes clear it's time for ministers to increase funding to a level which covers the true cost of providing quality childcare.

Since April 2017, early years funding in England has been calculated using the Early Years National Funding Formula, which imposes a universal base rate on all providers, regardless of type. The DfE continues to impose this flawed formula despite publishing independent research - in 2015, 2017 and now 2019 - that has consistently revealed that different types of early years providers do not cost the same to operate.

DfE has acknowledged from the outset that there is a problem for maintained nursery schools, which are more expensive to run. It awarded MNS a temporary reprieve of £55m per year in 2017, and £24m this month to see them through to the end of the 2019/20 school year.

What is less known is that the research has shown that childminders have an hourly cost approaching that of nursery schools, which is much higher than other providers. That seems counter-intuitive - childminders often charge parents less, have few staff, and don't pay for premises. However, the research shows it's down to their statutory staff-to-child ratios: childminders operate a 1:3 ratio for children under five. They tell us that funding for "free" places is unsustainable, at a time when childminder numbers have fallen a third since 2012. Early years funding, and the national formula, needs a rethink.

For the government to say the average rate paid is higher than the average cost is neither fair nor accurate. The findings of this report were based on work with 24 private providers, from more than 20,000 nurseries across the country. These findings cannot be said to be representative of the sector.

We have asked in our annual survey in recent years whether the hourly rate covers providers' costs and the answer is no - 87 per cent suffered from a shortfall, the average being £1.90 per hour.

The report also only looked at day-to-day running costs. It completely missed all the other investment that is needed to make a successful nursery, like expanding or improving facilities, new equipment and training and developing staff.

Comparing the cost figures in this report alongside the rates given to councils is also an unfair reflection. The rate paid to councils is higher than the rate that providers receive. They can retain five per cent of the total to support the sector and administer schemes to ensure sufficient places.

The proof of the impact of this underfunding is demonstrated in the numbers of closures, which shot up by 66 per cent during the first year of 30 hours and continue to rise. Businesses cannot remain sustainable when their biggest customer - the government - refuses to pay the going rate.