Following Edward Timpson's review of exclusions, the government has vowed to make schools accountable for excluded pupils and close loopholes used to off-roll. But sector leaders call for action to tackle high-stakes culture.

Among the 30 recommendations in Edward Timpson's long-awaited review of school exclusions in England is a call to government to develop new accountability measures to stop the practice of off-rolling.

As the former children's minister's review sets out, off-rolling has become an increasingly controversial aspect of behaviour management in schools, with evidence emerging that it is being used by some schools to avoid the scrutiny that comes with higher exclusion rates.

Timpson said the review heard "concerning" evidence on the use of off-rolling. It describes this as when children are made to leave school and are removed from the school roll without a formal permanent exclusion, or by the school encouraging parents to remove a child from school to home educate, which is done in the school's interest.

The review brands such practice as "wrong", but cautions that it is a separate issue to that of schools using the proper exclusion process.

"Tackling this rare but unacceptable practice could result in a rise in formal exclusion, as they would no longer be hidden from scrutiny and due process," it adds. 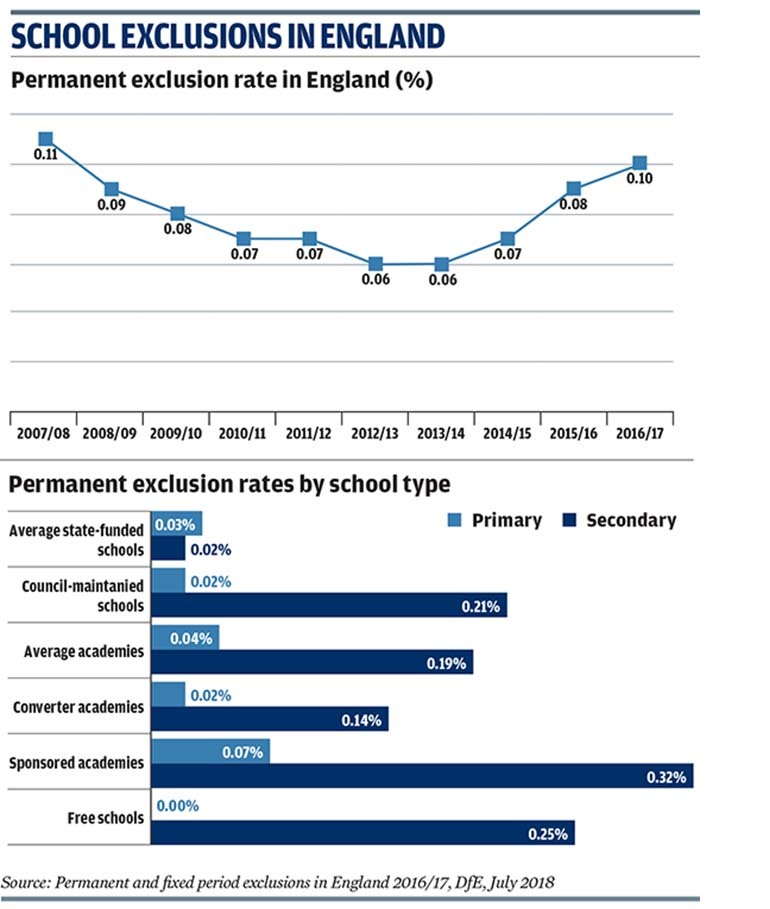 Timpson recommends that Ofsted continues to look for evidence of off-rolling when undertaking school inspections, meting out automatic "inadequate" rating for the leadership and management category when it is found. In its 2018 annual report, Ofsted noted it had identified 300 schools with high pupil movements that indicate off-rolling is occurring.

Other measures advocated by Timpson include the Department for Education developing new incentives to prevent schools from excluding pupils and ensuring that attainment of excluded pupils is included in exam league tables.

The government has accepted all 30 of the recommendations, and pledged to work with the sector to draw up plans for consultation in the autumn.

During a recent parliamentary debate on the review, Education Secretary Damian Hinds said he would work with Ofsted to tackle the "unacceptable" practice of off-rolling. "Off-rolling is not legal," he said. "It should not be happening, and we need to make sure it does not happen.

"Some people say there are shades of grey and it is not always clear what is allowable and what is not - so we will tighten up the guidance to make sure there is far less room for interpretation and it is clear when it is allowable for a child to be moved out of school and when it is not.

"Through Ofsted, and the new inspection framework, a spotlight will be shone on cases where it is believed that off-rolling may be taking place."

In a recent blog, senior Ofsted inspector Dan Owen explains that while off-rolling "is never acceptable", it can sometimes be difficult to identify what constitutes this practice.

"Off-rolling is not a black-and-white issue, and inspectors will need to gather evidence on inspection to see what is really happening," he writes.

"We know that very often there will be a good and positive explanation for why pupils have moved… and believe that the vast majority of schools always make decisions in the very best interests of pupils. However, if pupils are leaving a school to serve the school's interests, not their own, we will identify this and report on it."

Owen says the managed move of a pupil to prevent exclusion, registering with an alternative education provider and home education when it is the parent's clear choice are not off-rolling.

However, he says that inspectors have found evidence of schools pressuring families to take children out of school to avoid exclusion.

"This is a clear example of off-rolling and is never acceptable, as the statutory guidance on exclusions makes clear," he writes.

"Exclusions rightly go through a robust process to make sure they are justified. Avoiding this is not fair to pupils or parents."

Ofsted has also backed government proposals to introduce a compulsory register of home-educated children, which it says will help identify those pupils who have been off-rolled.

Meanwhile, some experts, such as Amanda Savage, head of education at TACT Fostering and Adoption, believe its new education inspection framework will not only help prevent off-rolling but improve safeguarding of children (see below).

Separate to off-rolling is the recent rise in the rate of exclusions (see graphics). The rise in permanent exclusions since 2012/13 is the most pronounced for a generation, although the rate for 2016/17 - the most recent data - is still lower than the level throughout most of the previous decade. This trend is also evident for fixed period exclusions, which have risen from 3.5 per cent of all pupils to 4.8 per cent over the same period.

Analysis for the review shows that four out of five permanent exclusions were of children who had special educational needs, were in contact with social services or were eligible for free school meals - in fact, 11 per cent of exclusions involved pupils with all three characteristics.

Anna Feuchtwang, chief executive of the National Children's Bureau, which has published a guide to the legal and unlawful use of exclusions, says the review has "shone a light on the more shadowy practices".

"It has made important recommendations about greater monitoring of schools' use of alternative provision, better recording of why a child leaves a school, and stronger checks carried out during Ofsted inspections for off-rolling.

"We welcome the government's indication that it will accept these recommendations and urge it to set out a clear timeframe for implementation.

"Our most vulnerable children have been falling through the gaps in our school system for too long, with too little attention paid to the quality of their education or the arrangements in place to safeguard them. The time is now right for the government to set out a clear vision for all our children."

When looking at what factors lie behind the data, Timpson found there is significant variation in how schools and councils use exclusion. This, he said, is driven by the different challenges faced by particular areas, and the different thresholds applied for using exclusion. For example, 85 per cent of all mainstream schools issued no permanent exclusions, yet 54 per cent of all permanent exclusions were in the quarter of the highest excluding local authority areas.

However, the National Education Union (NEU) says the review fails to acknowledge the "political policy drivers" for exclusions and off-rolling.

"These are the high stakes accountability system and the fragmentation of our school system into competing units chasing league table positions and high Ofsted scores, while accountability mechanisms such as local authorities have been undermined and stripped of their powers over thousands of academy schools," says Kevin Courtney, joint general secretary of the NEU.

"Timpson hasn't thought hard enough about the system-wide drivers that are making inclusion harder. To support schools to ensure all exclusions are appropriate, we need to be honest about how funding cuts make it harder to meet young people's individual needs.

"Ultimately, we need to tackle the high-stakes accountability system and allow all schools to teach in ways which best suit their pupils. At the same time, all schools should be brought within local accountability mechanisms under the local authority, and schools need to be properly funded and supported to ensure all children get the education they deserve."

The Association of Directors of Children's Services (ADCS) says making schools accountable for the educational outcomes of excluded pupils could remove the risk of off-rolling. However, it too wants to see system-wide reform.

"Accountability measures alone will not prevent pupils from getting to the point of exclusion," says Rachel Dickinson, ADCS president.

"The report acknowledges schools need more support to understand and respond to the needs of individual children before they get to the point of exclusion - part of this is ensuring schools have enough funding and resources to support children who could, with the right support, stay within the mainstream system, rather than be squeezed out.

"ADCS believes a culture change is urgently required at all levels to prevent children from falling through the gaps in the education system, from Whitehall to classrooms across the country."

By Amanda Savage, head of education, TACT Fostering and Adoption

Off-rolling can occur just before an Ofsted inspection, as a way of the school improving its position in the league tables, and to ensure that inspectors do not see the reality of a lively classroom.

However, it is important that schools are mindful that inspections purely provide independent, external evaluation - they are not designed to replace the tiers of monitoring and support structures that should ensure schools work to a moral code, as well as provide good quality education for all children at the school.

Head teachers are aware that no permanent exclusion should take place without the approval of the governors. However, the governors would not have to be notified if a parent "chooses" to take their child off-roll.

A vulnerable parent who is already struggling to manage their child's needs may feel teachers know best and might therefore be likely to succumb to the pressure placed on them to agree to their child leaving the school.

Foster carers and social care professionals will be all too aware that many of the young people in their care are safeguarded by being in school, and much of the information social services act upon is provided by schools that not only educate children, but also ensure they are safe, well cared for and under the protection of adults during the day.

Therefore, off-rolling can have far-reaching repercussions not only on the young person's life, but upon those of their families and the community in which they live.

Under its new education inspection framework, Ofsted could grade a school "inadequate" as soon as a safeguarding concern is identified.

TACT feels that as far as safeguarding vulnerable children is concerned, there should be zero tolerance to any school breaching safeguarding policies.

The bottom line is that our young people are far too precious for us to take any chances. They have entered care to be protected from harm, not to risk suffering more, no matter how remote we feel the chance could be.

Any changes Ofsted makes in challenging immoral or dangerous actions are a step in the right direction, but schools need to make sure that they fulfil their commitment to their pupils.

The Timpson review of school exclusions and government response, DfE, May 2019

Five things you need to know about exclusions, Children's Commissioner for England, May 2019