Duration of care proceedings off target

The time it takes care proceedings to be completed is rising and Cafcass chief Anthony Douglas says it is likely to continue.

The average time it takes for care proceedings to be completed in the family courts is at its highest level in four years, according to Ministry of Justice (MoJ) figures published in October.

The MoJ family court data shows it took 30 weeks to dispose of a care or supervision case during April to June 2018 - two weeks longer than the same quarter in 2017 and the highest average since 2014.

Just 48 per cent of cases were completed within the 26-week target set under the Public Law Outline (PLO) arrangements.

Social workers can legitimately apply for an extension to the 26-week timescales for complex cases that require additional work.

Quarterly data published by the Children and Family Court Advisory and Support Service (Cafcass) suggests, however, that the average duration of care proceedings over the past year has been between 31 and 32 weeks.

The Cafcass figures show in April to June 2018, the national average was 31 weeks, a slight improvement on the 32 weeks recorded for January to March.

The data also gives average durations for each of the 40 designated family judge areas in England. In the first three months of 2018/19, just five achieved the 26 weeks target, although again this was an improvement from the last quarter of 2017/18 when it was achieved by four areas.

The number of areas with average proceedings duration over 30 weeks also fell from 30 to 26 over the first six months of 2018 (see graphic).

Campaigners say the rise in the number of care applications over the past two years has created increasing demand in the family justice system, and warn that delays in cases can compound trauma for children.

Steve Reddy, director of children's and young people's services at Liverpool City Council, says increased demand has been a factor in the recent rise in case duration. However, there are also more complex cases where it is necessary to take longer than 26 weeks.

"We would also reference the type of demand," he says. "So for those longer term neglect cases - which seem to be an increasing proportion of our cases - the additional work and assessments required, including reference to independent social worker assessments and multiple viability assessments of connected relatives, can extend the timescales."

Children's services leaders say the levels seen now are still well below those experienced before the PLO was introduced - in 2012, average duration was 55 weeks.

Cafcass chief executive Anthony Douglas says pressures in the system mean average duration is likely to continue to rise, but that there is "no sign" it will be "anywhere near" pre-PLO levels (see expert view). 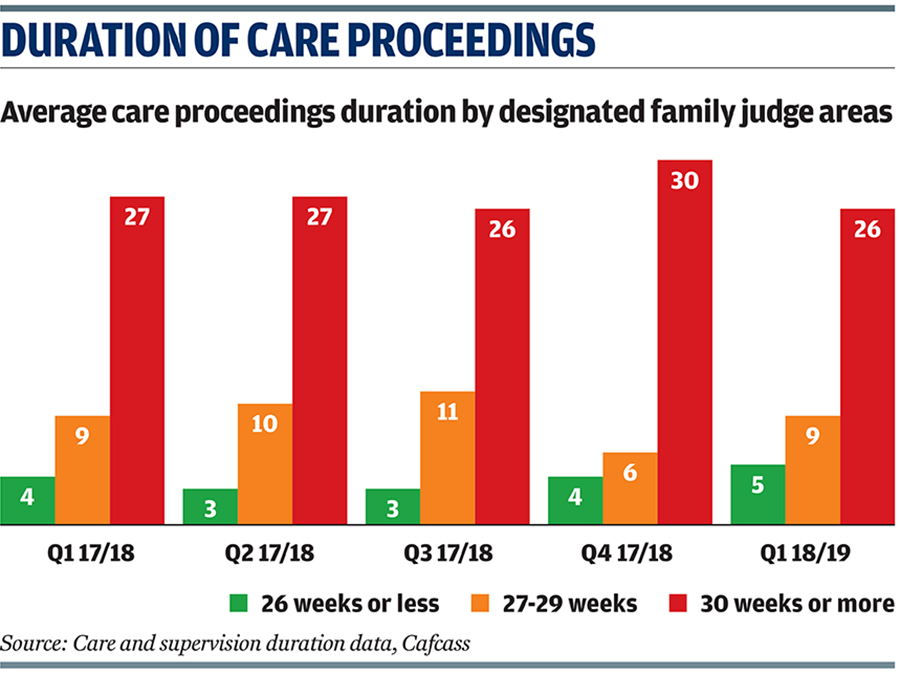 The headline figures mask some underlying trends for different subgroups of care cases. There are more supervision orders, more special guardianship orders with a supervision order and more children at home on care orders (placement with parents).

Adoptions continue to reduce in number and more children are either staying at home, returning home or staying in their kinship care network.

However, these shifts are small compared to historic shifts in the care population and in the context of variation in duration and performance in both local authorities and local courts.

The 26-week limit is one explanation for why there are more care orders as well as supervision orders. Courts may be reluctant to extend the case beyond 26 weeks, and this may not leave enough time to finalise the detail of a care plan, so they make a care order and the local authority has to go back to court again for a final "permanence order" of one legal status or another.

It is likely the upward trend in case duration will continue. Reversal is highly unlikely. The most important statistic is not the number of new care applications, but the number of cases live in the courts at a single point in time.

The number of "live" Cafcass cases is up by 12 per cent on last year, with an associated increase of around 20 per cent of children in care proceedings.

As with the reasons behind new applications, set out in the recent Care Crisis Review, there are multiple and chronic drivers of the rising stock of cases which have stimulated the need for a co-ordinated system response.

One driver is listing delays caused by pressure on court space and time. Another is the number of short notice or emergency cases - defined as those in which we receive the application less than a week before the first case management hearing - which in the last 12 months has comprised 43 per cent of all new public law cases.

This means that pre-proceedings work ends up being done during the court process, which tends to take more time. What matters most for children is not the duration of their case in court, but the change in their daily lived experience as a result.

True, some court cases can compound a problem, especially if a child is in a placement limbo as well as a legal limbo.

Many children whose cases last a long time in court for legal reasons are quite settled where they are living and are being well looked after.

The child's experience of care proceedings may well be sandwiched between long periods of uncertainty before court, and then the period after the court case is over.

It is important to avoid delay and to promote the child's wellbeing in all three phases of the process.

Reducing care case duration does not count for much if there is a major delay in finding a suitable long-term placement after court.

Being subject to care proceedings is dramatic, can be traumatic, and has lifelong consequences. The main timescale to concern ourselves about is the rest of the child's life and how we can maximise their prospects across all measures of wellbeing.