In the Digital Home, How do Parents Support Their Children and Who Supports Them?

Researchers at the London School of Economics (LSE) wanted to explore how parents and children engage with different forms of media to learn, create, communicate and play.

In the Digital Home, How do Parents Support Their Children and Who Supports Them?

Published by LSE Department of Media and Communications, February 2018

The researchers surveyed 2,032 parents of children aged from birth to 17 in late 2017. Most participants were recruited online while a sample of low or non-internet users were interviewed in person.

The report authors found media- and internet-related activities are a common way of sharing time within families. While mothers reported more activities with their children overall, fathers were particularly likely to say they played computer or video games with their children, suggesting this can be a valued shared activity. Some families were engaging in creative activities together, but only high-income families were likely to have created music, photos or videos together using digital media.

The survey found five in six parents who used the internet at least monthly, used it to support parenting activities. Half used it for educational purposes while four in 10 used the web to search for local activities and events or to download or stream content for their child. Three in 10 used it for social arrangements or for health information and advice related to their child.

Parents cited "screen time" as the third most contentious issue in their relationship with their children, with the top sources of difficulty being bedtime and sleep, and children's behaviour. Screen time was most problematic for parents of five- to 12-year-olds. The biggest sources of conflict with toddlers were bedtime, eating, and behaviour, with screen time in fourth place. For five- to eight-year-olds bedtime was top, followed by behaviour, and then screen time, eating and homework. For nine- to 12- year-olds, homework, screen time and behaviour were the most problematic issues, and for teens, helping in the house became an issue, followed by bedtime, screen time and homework.

The researchers found that in general conflict was more likely to arise over the amount of time a child spent in front of a screen rather than what they were doing with digital media.

They found little difference between mothers and fathers when it came to the restrictions they placed on digital media use. The gender of the child also made little difference. The child's age, however, did make a big difference, with younger children subject to more screen time rules and parental controls.

When parents had problems related to digital media, around a third said they just figured it out for themselves and a similar proportion said they searched online for advice. The researchers say this raises questions about the quality of the information obtained, since only 13 per cent of parents reported using official sites like the NHS for parenting advice. While 28 per cent of parents said they could turn to their own parents for advice in general, only nine per cent did this for digital problems, suggesting a generation gap in support. Less than 10 per cent would go to a child's school or nursery or a health professional for advice on digital matters. 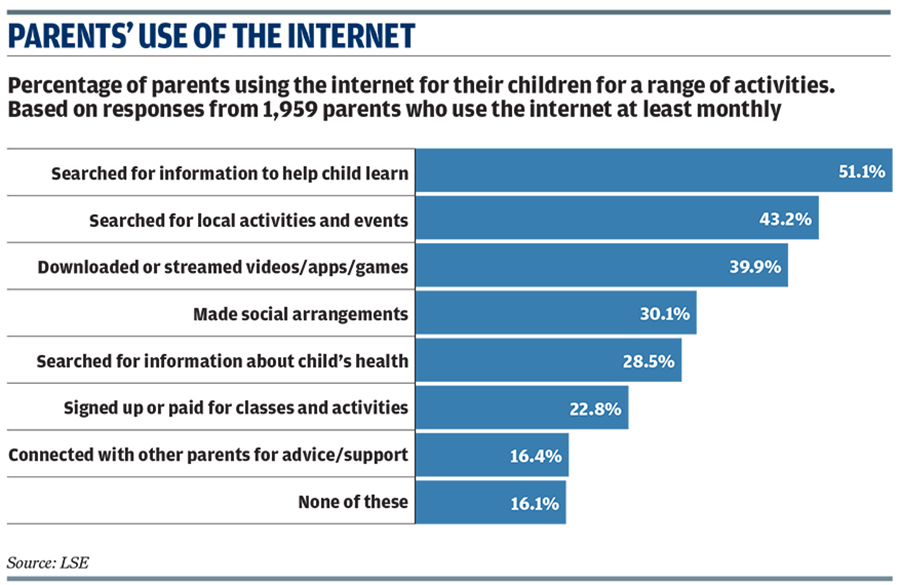 The researchers suggest that rather than worrying about the catch-all notion of "screen time" as separate from family life, it might be better to focus on whether, when and why particular digital activities help or harm individual children. Policymakers should consider how to reach parents with guidance on digital matters in ways that are effective, inclusive, and tailored to the specific ages and needs of their children.

The Class: Living and Learning in the Digital Age, Sonia Livingstone and Julian Sefton-Green, NYU Press, May 2016

Development and Validation of the Problematic Media Use Measure: A Parent Report Measure of Screen Media "Addiction" in Children, Sarah Domoff and others, Psychology of Popular Media Culture, November 2017