Nearly a quarter of directors of children's services (DCSs) in England is responsible also for adult services, analysis by CYP Now has revealed.

Thirty-five DCSs now oversee services for adults, compared with 14 this time last year. Thirteen of the 35 are known as directors of "people" in their local authority.

The findings support the Association of Directors of Children's Services' (ADCS) recent assertion that the standard solution of having a DCS whose primary concern is children's services as defined in the Children Act 2004 "can no longer be taken for granted", particularly as councils restructure their management to make savings.

The results represent the most definitive analysis yet on the role's changing nature, since they are based on information contained in the Little Blue Book, the annual directory of DCS contact details, produced each summer by CYP Now in partnership with the ADCS since 2008.

DCSs are in place in 149 of England's top-tier authorities, with three in the process of recruiting. The analysis also revealed a number of new terms creeping into directors' titles, reflecting their widening portfolios. Five include the word "communities" and three had "wellbeing", for example (see graph).

DCSs have changed in 39 authorities in the past year, representing a turnover rate of 25.7 per cent, a level similar to the past two years. Examining the comings and goings in councils over the past three years reveals that 91 DCS positions are occupied by different people, or are awaiting appointment, compared with 2008. This leaves a core of 61 (40 per cent) who have remained in post in the same authority for at least the past three years.

But the turnover rate is three times higher than the public sector average – around 8.4 per cent in 2009. The rates do not include any potential in-year changes, where a postholder might have joined and quit within a 12-month period.

Mike Bennett, co-managing director of the Society of Local Authority Chief Executives, said that the "huge service management responsibilities" held by DCSs makes them attractive candidates to move on to chief executive posts. Four DCSs currently double up as deputy chief executives, while just over half of all DCSs are women. 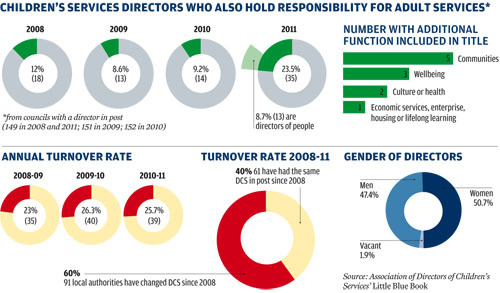