Hampshire and Isle of Wight councils

Employing skilled administrators has freed up social workers to do more face-to-face work.

Throughout 2016, a number of new services and practices were introduced across children's services in Hampshire and Isle of Wight through funding from the Children's Social Care Innovation Programme.

In March 2015, Hampshire and Isle of Wight councils were awarded £4m by the Department for Education to develop new ways of working to reduce bureaucracy in children's social care and halt rising demand for services. The ultimate aim of the changes was to improve outcomes for children and families by enhancing the relationships they formed with social workers and other children's professionals.

Stuart Ashley, assistant director of children's services for Hampshire Council, says PAs are "skilled business administrators" who handle a lot of the bureaucracy for social workers.

"They are more than administrators - they provide personal support for social workers," Ashley explains. "Social workers told us they spent a significant amount of their time on computers, which we wanted the PA to free them up from to spend with families."

Ashley says that some social workers were wary of handing over responsibility for arranging family visits and case management to PAs, but that this changed over time.

"Letting go of some of the administration that they do was a cultural change for some social workers," he says. "Everybody adjusted, and by the end of the project the feedback was ‘please don't take away my PA'."

The DfE funding was also used to create Family Intervention Teams (FITs) that brought social workers together with specialist practitioners in domestic abuse, substance misuse and mental health to support families. The FITs meant that instead of referring to specialists in other services, child protection teams could offer a package of support for families and children in need.

"Around 80 per cent of child protection cases involve the ‘toxic trio' of domestic violence, parental mental health and substance misuse," explains Ashley. "By seconding these professionals we were able to create a team around the family to hopefully create change or see a clear progression.

"It also enabled us to make decisions earlier on whether change was not possible."

Ashley rates FITs as the most successful aspect of the entire change programme, because they helped multi-disciplinary work flourish. He singles out the value of domestic abuse workers as being particularly helpful in aiding social workers to get perpetrators to understand the impact of abuse and change their behaviour. Domestic abuse workers were also more skilled in identifying when support was not going to work for a family and a different approach was needed.

He says: "They improved working relationships and brought a better understanding of evidence-based practice. It was particularly rewarding to see professionals learning from each other."

The third element of Hampshire's initiative was the recruitment of 200 volunteers to deliver a number of children's services functions, including return interviews for children that go missing, providing information and support for parents of children permanently excluded from school, mentoring for teenagers on the edge of care, and parenting and family support. Ashley says the department was inundated with enquiries by people from "all walks of life", some of whom saw it as an opportunity "to make a difference" while for others it was "good for their CV and a way of getting into social work".

Ashley says volunteers' status meant they were often able to gain the trust of children and families more easily than children's professionals. They also helped the department improve links with the local community.

Where volunteers undertook activities alongside vulnerable children it was particularly effective, Ashley says. "It helped support the young person through what could be quite challenging activities," he says. "The bushcraft workshops were the most successful activity, and will be part of our core offer to children on the edge of care in the future."

Although the funding ended in March, a number of elements of the programme have already been incorporated into children's services in Hampshire and the Isle of Wight.

PAs have been retained and already been extended to disability teams and will be rolled out across the whole department over the next 12 months. Evaluation of the programme by Oxford Brookes University and Institute of Public Care found PAs reduced the amount of time social workers spent on administration from 36 to 14 per cent, and raised time spent with families from 34 to 58 per cent. The cost of having a PA was put at £4,400, but they were estimated to create savings of £9,000 per social worker.

Meanwhile, the FITs helped engagement with "toxic trio" families rise from 29 to 70 per cent in Hampshire and 87 per cent in Isle of Wight. Ashley says a fall of 100 in the number of children in care when FITs were operating can be attributed to the early help delivered by the teams. "Care numbers went up when it came to an end," he adds. The costs of seconding specialist staff into FITs were met by the innovation fund, but with this now ended Ashley says integrated working will be incorporated into its four-year Partners in Practice programme. 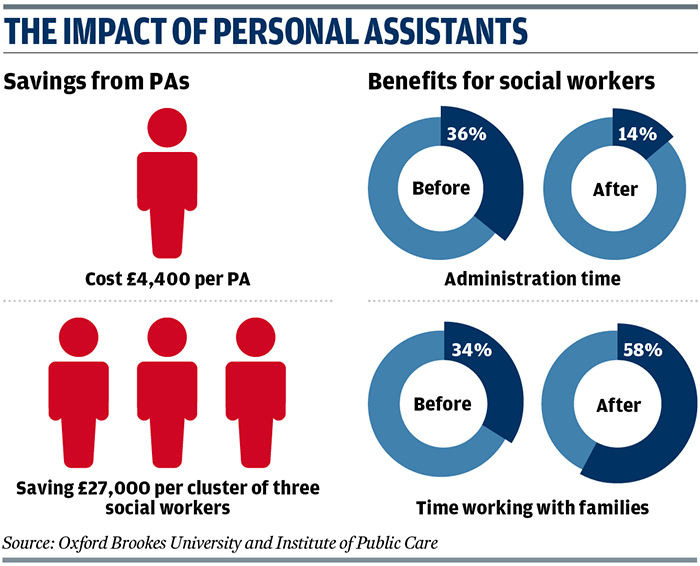 This article is part of CYP Now's special report on social work with children and families. Click here for more