The quality of children's social care is improving, according to new official figures from Ofsted, which has judged 46 per cent of departments as "good" or "outstanding".

The overall level of good and higher ratings are a 10 percentage point improvement on 17 months earlier, according to the report, Children's Social Care in England 2019.

The comparisons as of 31 March this year are made with councils' last inspections under the Single Inspections Framework as of October 2017.

The analysis comes following the first full year under the new inspections of local authority children's services (Ilacs) framework, which was introduced on 1 January 2018.

The proportion judged "inadequate" has dropped from 22 per cent to 13 per cent over the same period.

While there have been improvements on overall effectiveness, the rate of "good" or "outstanding" child protection services remains low.

Some 35 per cent were judged "good" or "outstanding" in the "children need of help and protection" category, an improvement on 28 per cent.

Four authorities are judged "outstanding" on help and protection whereas in October 2017 there were none with this rating.

Under the new framework, Ofsted has conducted inspections at 43 councils, with 56 per cent of these services judged "good" or better. Some 33 per cent are rated "requires improvement to be good", and 12 per cent are judged "inadequate".

Some 73 per cent of London boroughs are rated good or above, making them the most effective of the local authority types.

At 35 per cent, unitary authorities have the lowest percentage rated good or better. 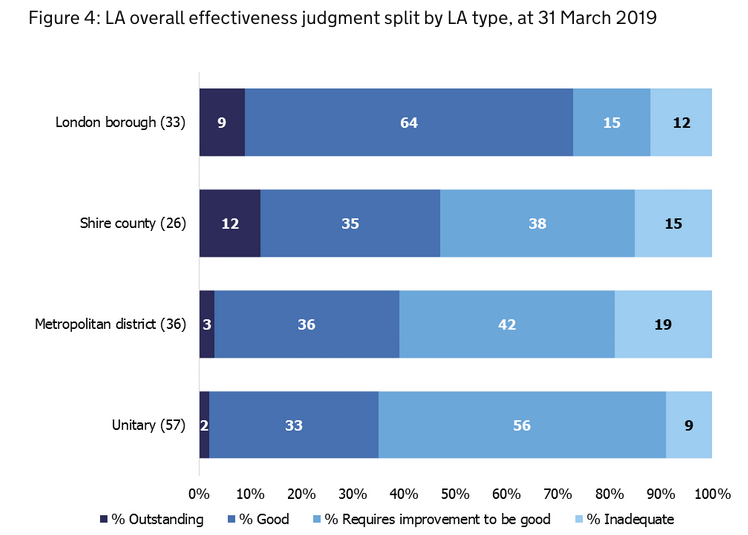 At the end of the financial year there were 2,304 children's homes of all types, a four per cent increase on the previous year when the number was 2,209.

Councils reduced the number of homes they run from 423 in March 2018 to 418 in March 2019, and nearly a third of local authorities do not run any children's homes.

Some 80 per cent of active and inspected children's homes are judged "good" or "outstanding" - one percentage point lower than a year earlier.

Ofsted cancelled 14 registrations in 2018/19, the highest number in one year, which consisted of 12 children's homes and two independent fostering agencies.

There are 152 local authorities responsible for the just over 400,000 children needing social care, and more than 75,000 of these are in care.