Number of pupils with SEN rises for third year to 1.3m

The prevalence of special educational needs (SEN) in England has risen for a third consecutive year to 14.9 per cent of all school pupils, according to official statistics released today.

Department for Education analysis of the schools census shows that as of January 2019 there were more pupils needing both SEN and higher level support from an education, health and care plan (EHCP) or statement.

Since 2016, the proportion of pupils with SEN but without statements or EHCPs has risen 4.5 per cent. 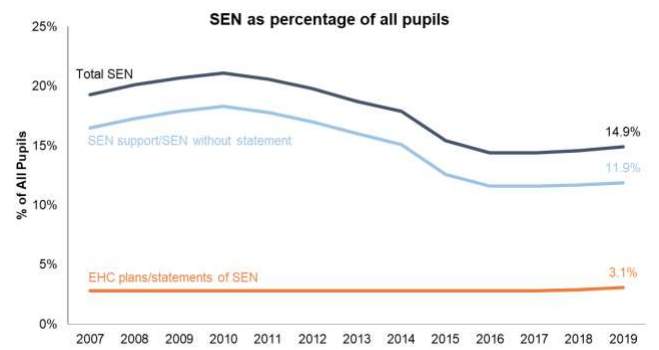 As of December 2018, there were fewer than 100 statements of SEN nationally, against a transfer deadline of March 2018 for all statements to EHCPs, as required by the 2014 reforms.

The number of pupils with SEN has increased across school types, with the exception of pupil referral units where a small decrease in pupil numbers has been seen both with SEN and overall.

Speech, language and communication is the most common type of need among pupils with SEN, at 23 per cent.

Autistic spectrum disorder remains the most common primary type of need among pupils with an EHCP, at 29 per cent - an increase from 28 per cent in January 2018.

Chief executive of charity Ambitious about Autism, Jolanta Lasota, said: "The number of pupils with autism in our schools continues to increase but sadly the support they need from our education system is not keeping pace.

"Autistic pupils are much more at risk of exclusion than their peers and we know parents face a much harder battle to get their children the education they deserve.

"As the number of autistic pupils continues to grow it's crucial that SEND funding keeps pace with the demand and that the needs of these children are placed at the centre of decisions made by schools, local authorities and the government.

"Across our education system we must foster a more inclusive approach that celebrates difference and enables all young people to reach their potential."

The government's decision making over SEN funding prompted a judicial review at the High Court last month, as analysis from the National Education Union revealed more than 8,000 children with SEN are going without education.

The judge's ruling has yet to be announced.