High rates of juvenile offending among prolific adult offenders, as well as links to poor educational attainment, poverty and school exclusions, are revealed by new Ministry of Justice data.

A prolific offender is someone who has committed a disproportionately large number of offences relative to their age group - four or more offences for juveniles, eight or more for young adults and 16 or more for adults.

The report compares the rates of offending per offence type committed as a juvenile (aged 10 to 17) to those committed most recently as an adult.

Theft was the most common first offence and last offence.

For more than half (55 per cent) of persistent offenders, their first crime was theft, reducing to under 30 per cent at the last offence.

Summary motoring offences were uncommon at less than one per cent among juveniles who became prolific offenders, rising to around eight per cent when they became adults. 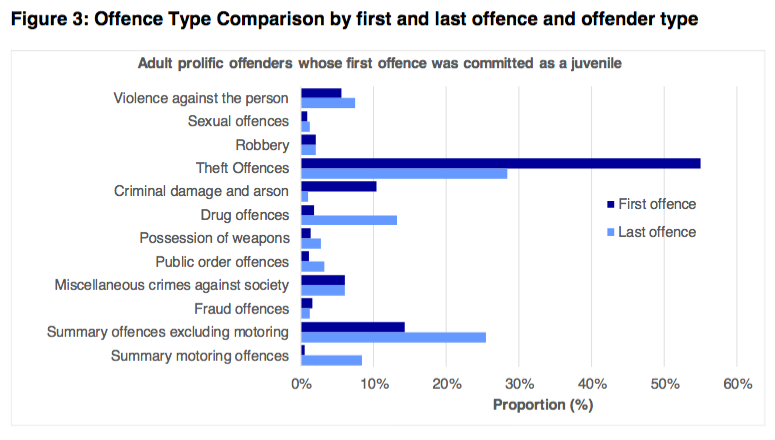 The rates were around three per cent and 20 per cent respectively for the A*-C grade range.

In each of these categories the rates across all pupils were 90 per cent and 59 per cent respectively. 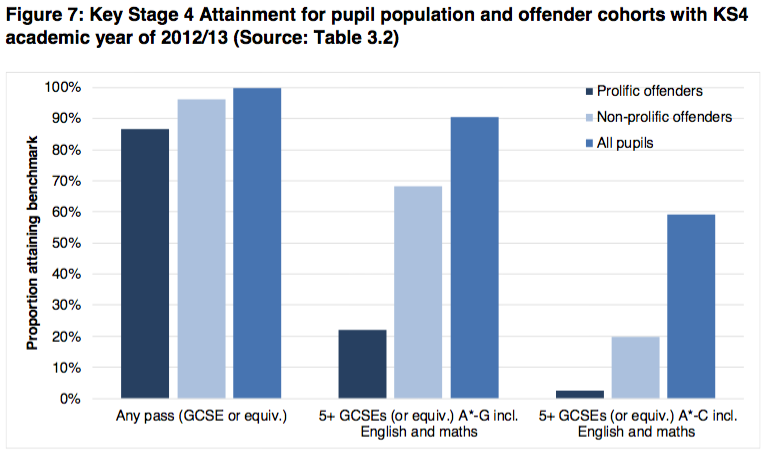 This applied both in their KS4 year and across the previous five years, and for SEN with and without a statement.

A similar pattern was observed for free school meal (FSM) eligibility - prolific offenders were more likely than non-prolific offenders to be eligible, both in their KS4 year and across the previous five years.

In addition, two-thirds of prolific offenders were persistently absent in their KS4 year, and 92 per cent in at least one of the previous five years, compared with half and three-quarters of non-prolific offenders respectively.

The difference between these groups is even greater for exclusions, with 91 per cent of prolific offenders having ever been excluded for a fixed period, compared with two-thirds of non-prolific offenders.

The report states that the "analysis does not imply causality as offending may have taken place before or after these characteristics were held".

"I have said before that preventing absence from school among vulnerable pupils is crucial, because school provides the best opportunities for them to make the most of their potential, and acts as a protection, away from the threat of gangs, crime or exploitation.

"This new analysis reinforces how pivotal education is for young people, especially those most at risk of being led down the wrong path in life."