The number of children's care applications made by councils to family courts has hit a three-year low, falling five per cent year-on-year.

Figures released by the Children and Family Court Advisory and Support Service (Cafcass) show a total of 13,536 applications made from March 2018 to April 2019.

And in December last year, care applications fell below 1,000 for the first time in three years, with the service receiving only 975 applications.

In the two previous years, applications rose by more than 1,600 each year.

Cafcass chief executive Anthony Douglas, said: "The sustained, small fall in care applications is most likely due to concerted edge-of-care support programmes in an increasing number of local authorities and the government's focus on understanding why demand peaked in 2017.

"Alongside government deep dives and other reviews, like the Care Crisis Review, local family justice areas are making doubly sure that an application to court needs to pass various tests, such as the need for the local authority to share parental responsibility for a given reason and for there to be clear blue water between child protection planning and court intervention. 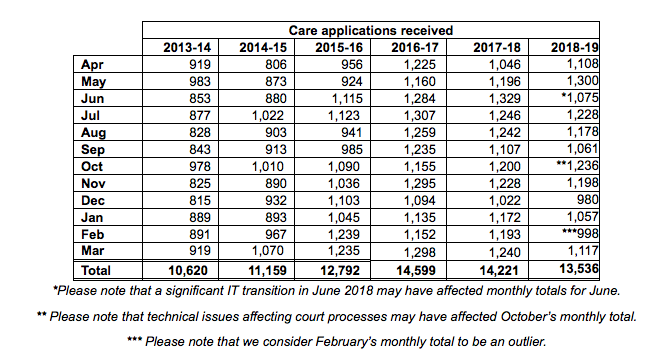 The government has been seeking to stem significant increases in the number of children being taken into care in recent years.

In September 2018 children's minister Nadhim Zahawi said Working Together to Safeguard Children guidance had been reviewed and amended to emphasise the importance of partnership and co-production with families and highlight the effectiveness of relationship-based practice.

Last month Anthony Douglas announced he was standing down from the organisation after more than 15 years.