Take-up of funded childcare for the most disadvantaged two-year-olds has dropped by more than five per cent amid increasing demand for 30 hours places for three- and four-year-olds, new official figures show.

While a fall is not unexpected, the news is a blow for a nationwide push by the DfE to boost the number of disadvantaged families taking up the offer - which had driven a steady rise from 58 per cent in 2015 to a peak last year.

This effect has weakened under pressure from the rollout of the three- and four-year-olds offer, confirming earlier sector concerns backed by a DfE survey of councils.

The DfE has partly put the fall down to a change in the eligibility criteria.

But sector representatives the National Day Nurseries Association and the Early Years Alliance have today underlined ongoing calls for the department to urgently increase funding across the childcare offers, particularly so that the most vulnerable children do not lose out. 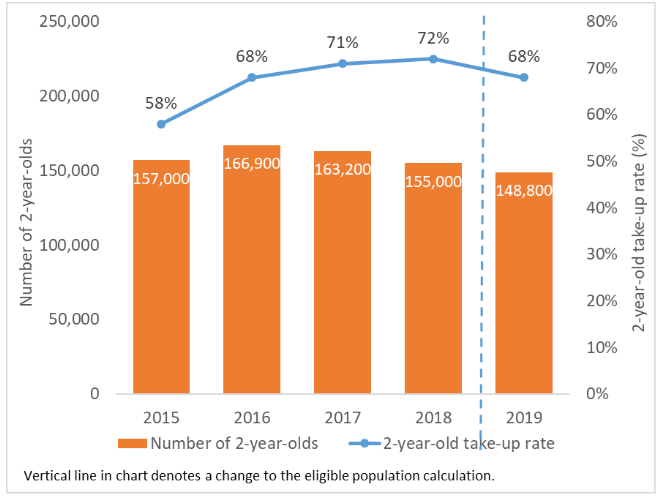 Provision for children under 5 years of age in England, DfE

Jonathan Broadbery, head of policy and external relations at the NDNA, said: "The latest statistics giving the take-up of eligible two-year-old funded places should not be a surprise to the government.

"Its own report analysing take-up of funded places published last September revealed that providers found it more difficult to offer two-year-old places due to underfunding and lack of resources for children who needed extra support.

"We know that there is a lot of work being done in the London area to improve access to these funded places, but this is painting a picture of more fundamental issues affecting take-up across the country."

Last year's annual NDNA survey revealed that half of nurseries said they could not cover their delivery costs on the funding rates they were given for two-year-old places.

Broadbery added: "Giving disadvantaged two-year-olds early support is crucial for them to reach their full potential, so these issues must be addressed if we are to close the attainment gap."

Neil Leitch, chief executive of the alliance said any drop was "extremely concerning", adding: "Sadly this has been on the cards for some time because, as we have repeatedly warned ministers, underfunding has made it increasingly difficult for providers to deliver places for all children cost effectively.

"However, the problem is even greater for those trying to offer two-year-old funded places because, according to recent Ceeda research, the gap between average funding rates and providers costs is now 37 per cent.

"The children entitled to these places are some of those who would benefit most from early education so any government should be concerned about this.

"The fact that this drop is happening under a government forever talking up the importance of social mobility is especially frustrating.

"Ministers now need to reflect on where their stubbornness on early years funding is leaving our most vulnerable children and look to increase funding levels as a matter of urgency."

James Hempsall, national programme director for the DfE-funded Childcare Works which seeks to boost engagement, acknowledged the market pressure from the "highly popular" 30 hours offer which has "required providers to work very hard and adjust and carefully manage their delivery models over the past 12 months".

Another influence is that the number of eligible families has fallen with increases in the national minimum wage, he suggested.

Hempsall said: "Everyone involved in the two-year-old offer should remain proud of its achievements.

"We think there is much more that can be done, now 30 hours has been implemented, to reach eligible two-year-olds through partnership working and parent champions.

"Which is why there is a raft of new DfE-funded projects this year focusing on doing just that. Such as the Childcare Works "Changing Lives Through Childcare" programme.

"These sessions work with Jobcentre Plus, health visitors, children's centres and other parent-facing workers to explain the entitlements and encourage and motivate take-up."