A review of local improvement arrangements for child and adolescent mental health services (CAMHS) has rated 80 per cent of areas as not good enough.

The review into the quality of 121 local transformation plans produced by clinical commissioning groups (CCGs) in England found significant deficiencies in a number of aspects of provision across the country.

Through measures introduced in 2015 under the Future in Mindreforms for improving CAMHS, each CCG was required to produce a local transformation plan. 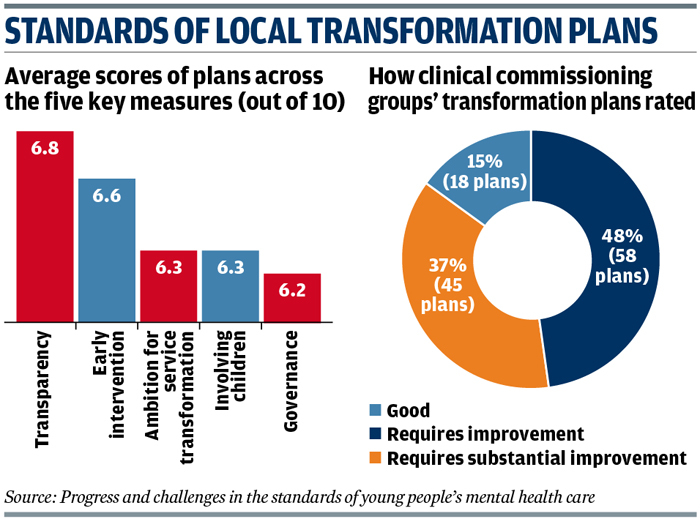 Six CCGs received good ratings across all five measures. These are: Birmingham, Camden, Dudley, Essex, Liverpool and Trafford. Meanwhile, six areas were rated as not achieving the expected standards in all five areas. These are: Barnsley, Hampshire, Knowsley, South Gloucestershire, South Sefton and Southport and Formby, and Wigan.

The study identified six barriers that could hinder the process of transformation as workforce challenges (in recruitment and training), funding, commissioning problems, using old data, fragmentation of local services and intervening too late.

The report outlines the key features of the best and worst local transformation plans.

Five features of the best plans:

Five features of the worst plans:

Despite the worrying picture, the authors state that transformation plans may not reflect all CCGs' work to improve services. Some experts have questioned if the review is an accurate reflection of the progress made by areas over the past year (see expert view).

But there is general agreement that more work needs to be done to ensure the ambitions of Future in Mind are fully delivered.

Expert view: There is still time for local transformation plans to deliver the ambitions of Future in Mind

Such is the variation in children's and young people's mental health services that it doesn't come as a surprise that some areas have robust plans, whereas others need further work.

The criteria used by the Education Policy Institute to review local transformation plans was quite rigorous. While that is good, especially if we want local areas to be ambitious, it doesn't quite match up with the guidance local areas received from NHS England. Local transformation plans had to be completed in a short time-frame and over the summer months. This was a big ask, especially if clinical commissioning groups (CCGs) hadn't started looking into how they would implement Future in Mind, didn't have good relationships with schools, or hadn't already consulted with children and young people (or had a mechanism to do so). This doesn't let CCGs off the hook - the plans are living documents, so there is still time to improve them - and some areas still need to get their heads around the guidance ambition that "more of the same is simply not an option".

We agree with the barriers identified in the review. Having a good plan is a start, and should be used to develop a co-ordinated whole-system approach, with an emphasis on early intervention. However, if there isn't the funding or the workforce to implement it, then it is unlikely to achieve the ambition set out for children and young people.

The current plans should be seen as the start of the transformation process, rather than an end point. There is an opportunity for them to evolve, improve and truly involve all stakeholders, and ensure no child is left behind. However, their second iteration needs to be more ambitious and fully encompass the blueprint set out in Future in Mind. If they don't, then there is real trouble ahead.