Safeguarding agencies now recognise that vulnerable children and young people are at risk of exploitation in a number of ways including by criminal gangs, political and religious extremists and paedophiles. Although the nature of the exploitation will vary depending on the circumstances, the methods used by those who exploit young people are similar.

Types of exploitation and its scale

Victims of child sexual exploitation (CSE) are often given gifts, money and affection by the people who sexually exploit them. The NSPCC explains that children or young people may be tricked into believing they're in a loving, consensual relationship, invited to parties and given drugs and alcohol, or be groomed and exploited online.

Some children are trafficked into or within the UK by criminal gangs for the purpose of sexual exploitation. Female members of gangs can also be victims of CSE. Some young people may not recognise this, despite sexual exploitation sometimes resulting in injury (see practice example).

"County lines activity and the associated violence, drug dealing and exploitation has a devastating impact on young people, vulnerable adults and local communities," it adds.

Victims of CCE are often groomed from a young age, initially offered protection and gifts by the gang to engender a level of gratitude and debt before being given low-level tasks. Once fully integrated into the gang, young people will be expected to carry out serious crimes - refusal can lead to threats of violence against them or their family, explains social business Catch 22, which runs a CSE support service in Merseyside (see practice example).

"By this stage the young person…will almost certainly have witnessed violent acts by the gang and will understand that threats of violence are not empty, and are likely to do what is asked of them," it states.

Concerns about the risk of radicalisation of young people by extremist groups led to the development a decade ago of the government's counter-terrorism Prevent strategy, a key element of which is Channel, a specialist education and support programme for young people and families vulnerable to radicalisation.

Educate Against Hate, a website developed by the Home Office and Department for Education, states that children are particularly vulnerable to radicalisation and extremist views as they "take risks, explore new things and push boundaries". It states that those experiencing racism, low self-esteem, identity issues and family problems are most vulnerable.

NSPCC advice for the signs a child is being radicalised include isolating themselves from family and friends, a sudden disrespectful attitude towards others and increased levels of anger. "Extremists might target them and tell them they can be part of something special, later brainwashing them into cutting themselves off from their friends and family," it adds.

There is a lack of official data on the scale of young people experiencing exploitation, however studies suggest the risk is rising. A survey of 174 Barnardo's managers found 60 per cent reported supporting young people that were exploited by criminal gangs; with more than half of this group saying sexual exploitation was also a feature (see graphic, below).

Policymakers have responded to the growing threat of child exploitation by developing legislation to improve young people's resilience to the risks, increase support for victims and develop new measures to deal with perpetrators.

The introduction in September 2019 of statutory relationships and sex education (RSE) through the Children and Families Act 2017 was partly driven by the need to better educate young people about the risks of online grooming by sexual predators.

Child welfare campaigners are also calling for the introduction of financial education so young people are able to recognise when they are being financially coerced, often a feature of exploitative relationships.

Another measure to protect young people online is the development of the Age Appropriate Design Code, proposals for which are currently being consulted on. In addition to introducing new rules for protecting people's personal data online, it will require internet service providers, websites and apps to sign up to a new code of practice that will be enforceable by the Information Commissioner.

A consultation on the Domestic Abuse Bill closed in May. The bill includes measures to improve protection for children that live in households where domestic violence is present and who either experience abuse directly or are affected by the witnessing of it. Children who experience domestic violence are more likely to suffer adverse life outcomes and participate in risky behaviour putting them at greater risk.

In the criminal justice arena, last year the Home Office published guidance on how safeguarding professionals and police can work together to tackle criminal exploitation of children and vulnerable adults by county lines gangs. The guidance sets out the signs to look for in potential victims, and what to do about it.

The Serious Violence Strategy, published by the Home Office in April, incorporates a range of measures to tackle gang-related violent crime including a £22m Early Intervention Youth Fund to bring police and crime commissioners, local authorities and the voluntary sector together to develop new ways to prevent young people getting involved in crime.

The strategy also includes plans to develop a new National County Lines Co-ordination Centre to develop a joined-up response, more funding for anti-knife crime initiatives, and expansion of the advocates scheme that works with gang-affected young women and girls.

In addition, the Modern Slavery Act 2015 introduced tougher sentences for perpetrators of such crimes and a pilot of the child trafficking advocates scheme. A recent report found demand for advocates was higher than expected.

Meanwhile, updated Working Together to Safeguard Children statutory guidance introduces new advice for practitioners on how to respond to CCE by gangs and the risk of radicalisation. In 2015, the previous coalition government also published Tackling Child Sexual Exploitation, a strategy that included measures to strengthen the response to CSE in the wake of the Rotherham scandal.

In response to the developments in exploitation policy and practice, local authorities and other child protection agencies are working increasingly collaboratively to tackle the risks. This has seen the creation of multi-agency safeguarding hubs involving a range of organisations across a local area, specialist gangs units in children's services departments (see practice example), and regional hubs to support and protect victims of all forms of exploitation.

In other areas, such as Luton, the response to tackling extremism and radicalisation, and all other forms of exploitation, has been integrated into its wider safeguarding procedures and practices (see practice example).

With the methods used by gangs and individuals to exploit children and young people becoming more sophisticated, safeguarding agencies will need to work ever more closely to prevent abuse and protect victims. 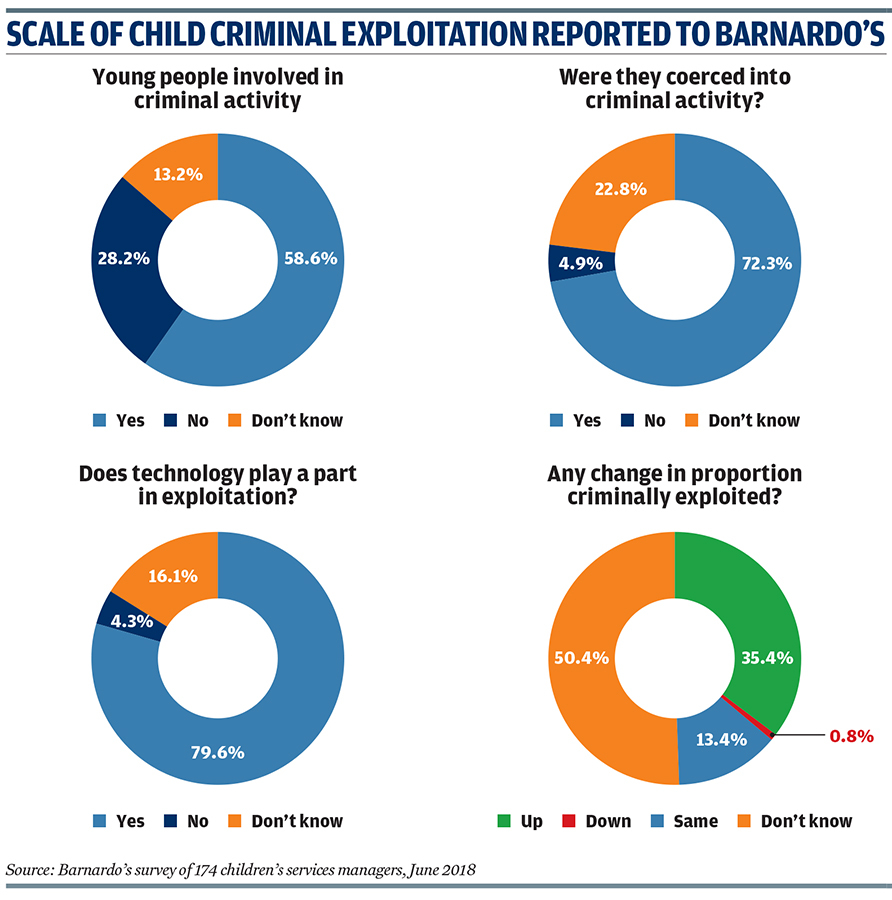 Barnardo's specialist UK-wide services support thousands of children to recover from multiple forms of abuse and exploitation each year.

In the last year, nearly 60 per cent of the 174 Barnardo's service managers who responded to our survey described supporting children and young people who have been involved in crime.

Of those, nearly three quarters thought the victim had been coerced, deceived or manipulated and more than a third said there had been an increase in the proportion of children and young people their service supports who are being criminally exploited.

More than 60 per cent of those who responded said that in their experience criminal exploitation also involved sexual abuse.

Worryingly, we are seeing this disturbing picture across a range of our services, in various regions and nations throughout the UK.

Our services, such as YouTurn, support children and young people at risk of involvement with gangs and violent crime in the south London boroughs of Lambeth, Southwark and Croydon.

Early intervention to preventing this abuse is key. It is vital professionals can identify the signs of children and young people being groomed, and can effectively safeguard against child criminal exploitation.

We need children's social care, health, education, police, and criminal justice services to work together in a systematic way, with all the agencies involved, for as long as it takes.

We will continue to be vigilant to emerging forms of exploitation so we can help break the cycle of violence and abuse waged against children and young people.

Early in my career I worked in a semi-secure children's home. Many of the young people I supported found themselves on the wrong side of the law and, despite their misdemeanours, were scared, traumatised or frankly unwell. At times I felt like a lone voice advocating for us to do more to help them come to terms with the harm they had suffered in their young lives, rather than punishing them.

In many ways policy and practice has moved on in children's services but sadly, our model of youth justice is still predicated on retribution rather than rehabilitation, with the child being seen first and foremost as an offender. This binary position ignores the reality that young people who offend are disproportionately more likely to be a victim of crime thanks to manipulation or exploitation by adults.

A growing body of evidence clearly links childhood trauma with offending behaviours. One study, for example, analysed the caseloads of youth offending teams in London and found that around half of the children they were working with had experienced or witnessed crime, abuse or violence, over a third had emotional and mental health needs but fewer than one in five were receiving the support they required.

The vulnerability of children and young people in custody has again been highlighted in the Chief Inspector of Prisons 2017/18 annual report in which it is noted that bullying, self-harm and violence remain ongoing concerns, as does the use of restraint.

We should have the freedom to work with those who have offended, or who are on the cusp of doing so, to support them to understand the impact of their behaviour.

I believe using restorative approaches better helps children and young people confront the consequences of their actions to bring about change. Let us also keep in mind the vulnerability of this group, particularly as we get to grips with county lines and other forms of criminal exploitation.

This article is part of CYP Now's special report on exploitation and vulnerability. Click here for more