Although the population of the youth secure estate has dropped substantially, youth custody settings are struggling to improve support for young people, with outcomes described as "not good enough".

The number of under-18s in the secure estate has fallen significantly over the past decade, from around 3,000 in 2008 to 858 in March this year. Just over 70 per cent of under-18s in custody - 618 young people - were in young offender institutions (YOIs), 143 in secure training centres (STC) and 97 in secure children's homes.

The drop in custody numbers is a success story for the youth justice system as a whole. However, it means those who are detained tend to be repeat offenders - mostly boys and young men - whose challenging behaviour and personal problems are more entrenched.

The latest annual youth justice statistics from the Ministry of Justice and Youth Justice Board show the proportion in custody for violent offences against the person, robbery and sexual offences increased from 58 to 68 per cent between March 2011 and March 2016.

The greatest increase was in the proportion in custody for violence against others, increasing from 24 to 34 per cent.

While the total number of behaviour and safety incidents in youth custody has decreased over time, reflecting the diminishing custody population, the statistics show rates of restrictive physical interventions, self-harm incidents and assaults have increased since 2011.

This may partly reflect the more challenging characteristics of those detained. However, inspectors have been highly critical of efforts to manage behaviour and tackle violence.

The chief inspector of prisons' annual report 2015/16, which draws on inspections of five YOIs and visits to three STCs, concluded that outcomes for children in custody were simply "not good enough" (see table).

"All but one YOI was judged to be not sufficiently safe, with poor behaviour management and high levels of violence prevalent," says the report.

"Poor control of behaviour also affected the purposeful activity provided and too many children were locked up when they should have been in class." 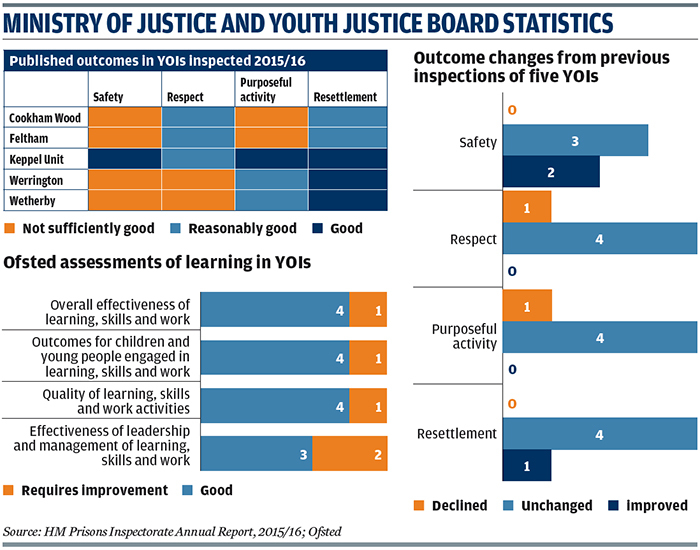 This is reflected in feedback from young people gathered in an annual survey of children in custody by HM Inspectorate of Prisons.

The 2015/16 survey found 46 per cent of boys at YOIs reported feeling unsafe at some point - the highest figure recorded through the research.

There was a significant increase in the number of boys who reported being victimised by other detainees - 35 per cent compared with 26 per cent in 2014/15. Meanwhile, 32 per cent said they had been victimised by members of staff, up from 25 per cent the previous year.

When it came to behaviour management, the chief inspector's report did identify some positive practice. For example, at Feltham YOI, managers had established two "violence and gang-free" units, "which had a positive impact on encouraging responsible behaviour".

"These units were unlocked for most of the day and nearly all boys living there took part in purposeful activity," said the report.

From August 2015, education providers began delivering 27 hours of education and three hours of PE a week at all YOIs.

"Although we welcomed this expansion, our inspections found that problems with behaviour management, violence and staff shortages led to poor attendance, delayed start times and early finishes in many classes," says the chief inspector's report. "As a consequence, on average children took part in only half the education provided and many accessed less than that.

"This was a significant failing, with a waste of resources, and a missed opportunity to improve the life chances of children on release."

However, for those who did attend education, the quality of teaching and learning was mainly good and achievement generally high in vocational subjects - although achievement in core skills such as literacy and numeracy was "variable".

Ofsted assessments for the five YOIs inspected in 2015/16 show that four were judged "good" for overall effectiveness of learning and skills work, while one "requires improvement" (see graphic). Since then, Cookham Wood has also been rated as good overall (see case study).

Results for resettlement provision were generally more positive, with outcomes judged good or reasonably good at all five YOIs.

"We found committed teams of caseworkers across many sites and some positive improvements to practice including the use of release on temporary licence to support resettlement," says the report.

However, it also highlighted ongoing difficulties in finding suitable accommodation for children once released from custody, a particular issue for looked-after children.

"Too many children were released to inappropriate accommodation and had little to occupy them on release," says the report. "It is hard to imagine anything more likely to ensure a swift return to custody."

Cookham Wood in Kent cares for boys aged 15 to 18. While there are concerns about safety and the level of violence at the establishment, a recent unscheduled inspection in autumn last year found progress had been made.

At the time of the inspection in September 2016, there were 156 young men detained at the establishment.

Inspectors said safeguarding and child protection arrangements at the YOI were well developed and the care offered to boys at risk of self-harm was good.

Staff were also praised for being "knowledgeable, caring and working patiently with some very difficult young people".

Meanwhile, Ofsted rated learning, skills and work provision as "good" across all key assessment areas, although inspectors said this could have been "better still" if it were not for "disruptions to routines and weak co-ordination that hampered attendance and punctuality" - a priority area for improvement.

This approach is supported by the YOI's rewards and sanctions scheme designed to incentivise positive behaviour and effort through access to facilities and activities or the threat of these being removed.

Inspectors found some Pact plans were "very good and addressed the issues", but some were "superficial".

Plans were managed by residential officers, but inspectors recommended this should be a multi-disciplinary process.

Another recent development was the creation of a "progression unit" for young people whose behaviour was persistently disruptive or violent.

The unit, which has 19 boys on it, was designed to provide an alternative to segregation, offering a four-week programme of interventions and education that would help young people return to the mainstream setting.

"Boys initially received a tightly restricted regime, which included little more than daily exercise, a shower and about 30 minutes of individual education on the unit," says the inspection report.

"As their behaviour improved, they could gradually progress to a more open regime, including an incremental return to full-time education and association."

Inspectors found early signs this approach had been successful in some cases "helping to reduce the number of violent incidents and use of segregation".

"However, we were concerned that in too many of the more complex cases, young people were unable to progress due to their poor behaviour," adds the report.

The quality of many of the Pact plans for these boys was poor. Consequently, too many remained locked up alone in their cells nearly all day with little purposeful activity, it explains.

Peter Clarke, chief inspector of prisons, described the report as "very positive" overall. "Difficulties, risks and weaknesses were being attended to in effective and often creative and innovative ways right across the prison," he said.

"The prison was led with confidence; the management team seemed cohesive and attentive, and an evident strength was the quite impressive culture that was developing among the staff as they grew in experience and confidence."