Children and young people's mental health services are the Cinderella of the NHS. While there is new money through the £1.4bn Future in Mind programme, many areas are starting from a low base. But even with the new money, it will not be possible to help every child or young person who has a mental health problem.

So it begs the question: does something need to be done differently to help children and young people?

Child and adolescent mental health services (CAMHS) straddle various agencies. Pressures on one part of the system will impact on the rest. While we have had funding crises before, what is different now is the state of the wider system CAMHS sits within.

There have been unprecedented cuts to local authority-funded services - social care, public health, youth work - as well as huge pressures on the NHS generally and schools budgets. This all affects the funding of voluntary sector services as well.

At the same time, probably because of cuts to funding for early intervention services, there has been an increase in demand for specialist mental health provision. It is a perfect storm.

Evidence from various sources has highlighted that the funding from government is not reaching frontline mental health services.

The additional money has gone in via clinical commissioning groups (CCGs) and while some have invested in CAMHS, we know that this is not always the case.

Royal College of Psychiatrists research in late 2016 found that some CCGs were spending less than £10 per head of population, with a few spending under £3.

A recent survey by NHS Providers found that many CCGs have given funding priority to acute hospitals. It is telling that last year NHS clinical commissioners called on the government to ringfence the additional money for children and young people's mental health, so they would not be pressurised into spending the money elsewhere. This has not happened.

Evidence from various sources - most recently charity YoungMinds' survey of CCG spending (see graphics) - suggests that in some areas, this money is being used to plug other gaps. 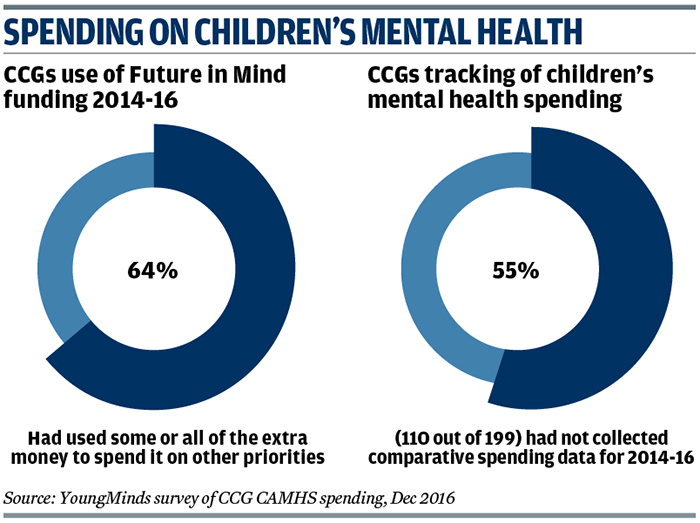 Specialist NHS children and young people's mental health services will always be needed, but these cannot be expected to do everything - other agencies are often better placed to help. Better integrated working will help, but it is not always as good as it should be.

One way to move this forward is through training the whole workforce together to understand child development, what common mental disorders are and how it impacts on the lives of children, young people and their families.

Learning together helps improve support for young people and reduces the risk of them being lost between parts of the system.

We want to see greater investment in early intervention, so only those who really need it end up in specialist CAMHS. There needs to be a public health approach to mental health where we improve everyone's mental health. Schools must play a greater role, so we were pleased to hear Prime Minister Theresa May's announcement last week included more focus on mental health in schools and colleges (see box).

Early intervention makes sense from a clinical and economic perspective, but the problem is how you help those with ongoing mental health problems; while at the same time working to prevent problems starting or addressing problems at an early stage. The answer seems to be having some money up front that is not tied to the NHS or any other pot.

The Children and Young People's Mental Health Coalition, along with the Policy Education Institute, have suggested a Prime Minister's Mental Health Challenge. Along the lines of the successful Dementia Challenge, this would see money coming from the Cabinet Office or Number 10 - rather than the NHS - which has cross-government and arm's-length body support. Children and young people would be at the centre of this work; and the voluntary sector would be involved from the very start.

There are some positives regarding the current situation: we are not starting from scratch as every area has a Local Transformation Plan. They may not all be as good as we would like, but there is a positive narrative, and it is the beginning of the transformation work, not the end.

The review of children's mental health services and the green paper on the issue that is proposed to follow will hopefully help this process by highlighting what is and is not working well, and iron out some of the proposals.

We need to ensure that there is adequate money and resources, and a will to truly transform CAMHS, rather than firefighting to sustain them.

In a speech given at the Charity Commission on 9 January, Theresa May pledged to make improving mental health support a key priority for the government. Measures include: