Young people get on their bikes to succeed

PruGOals is among projects funded by Prudential's charitable programme, which gave £4.9m to various community projects in the UK in 2017/18

Prudential has sponsored cycling event RideLondon since 2013. RideLondon is a festival of cycling that takes place in July and includes separate events such as a 100-mile race, a 46-mile sportive - or mass cycling event - and a family ride in central London. The company was keen to widen its sponsorship of the event to directly support community groups so in 2016 joined forces with sports coaching and mentoring charity Greenhouse Sports and teacher training charity Teach First to create a programme that would benefit disadvantaged young people.

PruGOals aims to improve self-esteem, aspiration and educational outcomes of young people as well as giving them the opportunity to develop their employability and confidence and widen their access to sport. It also supports schools to offer extra-curricular activities they would not otherwise be able to do. In its first year the programme supported 62 London-based participants but it has expanded year by year and in 2018 will reach 500 16- to 18-year-olds from disadvantaged communities across the UK. This year PruGOals is being supported by five charities - Teach First, Greenhouse Sports, Transformation Trust, Dame Kelly Holmes Trust and Centrepoint - all of which can refer young people.

Pupils and their teachers are given the opportunity to train for and take part in RideLondon. Every teacher and student taking part in the programme receives a free made-to-measure road bike, as well as helmets, locks and lights. They take part in a bespoke five-month training programme, culminating in professionally-led training rides with cycling coaches, advising participants how to cycle safely in a peloton. They also attend workshops on nutrition and receive expert advice on bike maintenance and safety, and have the chance to meet the PruGOals ambassadors - Olympic boxing champion Nicola Adams and Dame Kelly Holmes.

Further workshops cover ways in which skills the young people learn from cycling, such as resilience, can be transferred to other parts of their lives. Some students are able to visit the Prudential offices for a day of talks, workshops and activities covering careers and employability advice.

Before the race, pupils and teachers spend the weekend in London. In July 2017, 217 pupils and teachers took part in a range of pre-ride activities, including attending the RideLondon cycling show, ride preparation workshops from experts and a dinner in the velodrome at the Olympic Park. "The young people stayed in accommodation at Queen Mary University of London," says Jane Rawnsley, group head of corporate responsibility at Prudential. "One headmaster said he'd been trying to mentor a student for months to consider studying engineering at university, and when the student came to Queen Mary it opened up their eyes to see that was a possibility." The students completed the programme by cycling either 46 or 100 miles from Surrey to London. 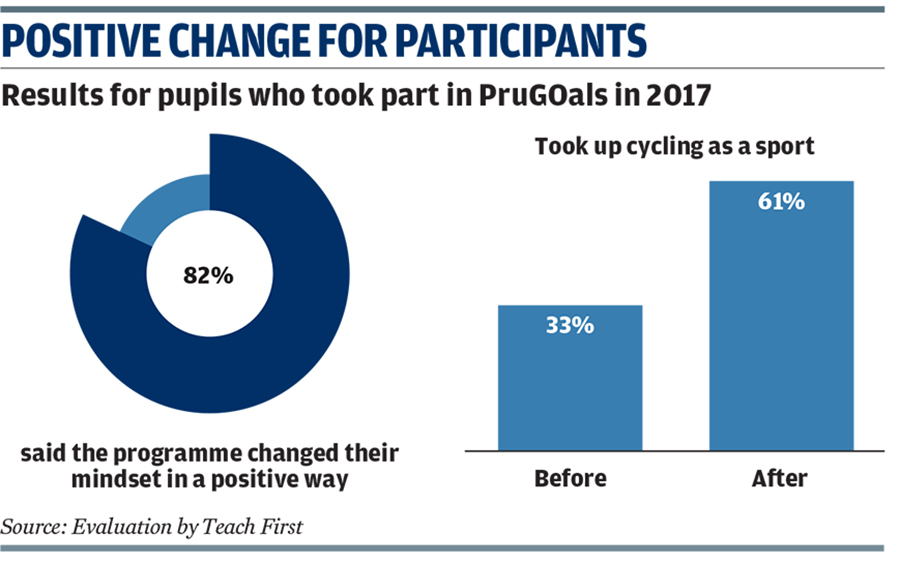 In 2017, 288 young people were referred from 17 Teach First schools from five regions across Britain - London, the West Midlands, the East of England, the North West and the North East. According to an evaluation by Teach First, 94 per cent of young people taking part said they accomplished everything they wanted to by being part of PruGOals and 90 per cent said they enjoyed training for the cycle ride.

In all, 82 per cent said taking part in PruGOals had changed their mindset in a positive way. Three quarters - 75 per cent - of those who started the programme completed it. By the end, 61 per cent had taken up cycling as a sport, compared with 33 per cent at the start. Participants said they had developed skills including determination, commitment, stamina, resilience and confidence.